Seven years in, Pope Francis has given the church an education in dialogue 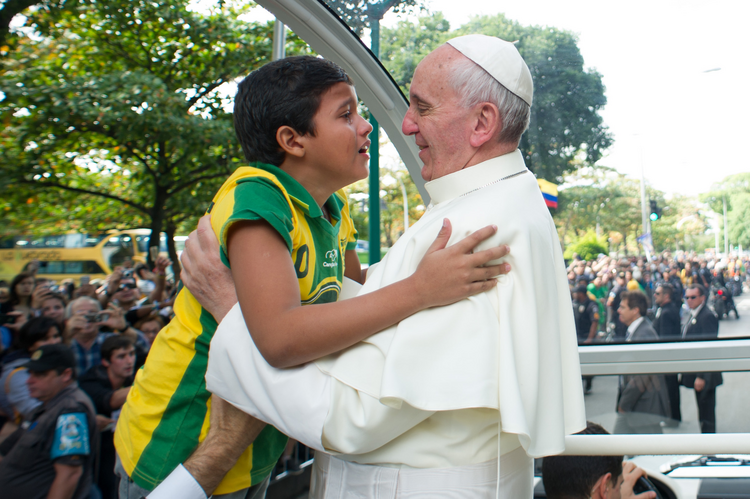 Pope Francis embraces a boy as he arrives at a park to hear confessions in Rio de Janeiro July 26. The pope showed the world on his first international trip that his forte as a communicator is the simple, seemingly artless action that resonates powerfull y in context. (CNS photo/L'Osservatore Romano)

Less than three months after Pope Francis was elected, he held an audience at the Vatican with 9,000 students, parents, teachers and alums from Jesuit schools in Italy and Albania. The pope was set to speak on the theme of Jesuit education, and his audience had gathered, as per papal protocol, to listen respectfully.

“I prepared this address for you,” the pope began, “but it is five pages long! Somewhat boring. Let’s do something else.” Applause erupted.

“I will briefly summarize it,” he continued, “and then it will be possible for a few of you to ask a question and we can have a little dialogue. Do we like this idea or not?”

Becoming a church that is mature enough to engage in authentic dialogue—that is the goal.

Another assenting applause filled the hall. The event organizers were taken aback and understandably apprehensive about what to do. Off stage, they quietly rallied some of the students as the pope spent the next five minutes summarizing the main points of his text. When he finished, he opened the floor to any questions the students and teachers might have. “I’m ready,” he said disarmingly.

The next 30 minutes witnessed a truly genuine and lively back-and-forth between students of various ages, educators and Francis. One student acknowledged his doubts about faith and asked the pope to offer some advice. Another student asked why he had renounced the luxuries of the papacy, opting instead to live in the Vatican guesthouse, drive a small car and even take the bus. One bold, young girl asked him directly if he even wanted to be pope! The audience burst into laughter.

March 13, 2020, marks the seventh anniversary of the election of Pope Francis. With his election came a sudden and dramatic shift in access to the pope, and a flood of endearing and illuminating encounters like the one experienced by those young students.

Early on, everyone was awestruck, especially Catholics. Vatican commentators chalked it up to the pope’s simpler style and spontaneous personality. Some Catholics were fearful that such openness and unpredictability exposed the papacy to irreparable damage.

Francis, aware of his responsibility to lead by example, engages in the dialogues he facilitates.

What became clear over these past seven years is Francis’ unrelenting commitment to creating opportunities for open and mutual encounters between him and others. The notion of Francis setting aside his prepared text in order to initiate a dialogue with an audience was novel in 2013. Today it is almost to be expected.

It would be a mistake, however, to think that Francis creates these opportunities spontaneously. Some Catholics may think him mad, but there is a method in his madness. Paradoxically, by facilitating these highly intentional encounters Francis ensures the conditions for a truly open and free exchange of ideas and opinions. Becoming a church that is mature enough to engage in authentic dialogue—that is the goal.

To pursue that goal effectively, Francis knows he cannot merely facilitate opportunities for dialogue. The church, the bishops, individual Catholics and even the pope must learn how to dialogue. Francis, aware of his responsibility to lead by example, engages in the dialogues he facilitates.

Pope Francis: The Interview
The Editors

About six weeks after that audience with the young students, Francis visited Rio de Janeiro, Brazil, to celebrate World Youth Day. It was a massive media event, Francis’ first international trip as pope. The journalists accompanying him were eager to debrief aboard the plane back to Rome. They prepared questions to submit, as per papal protocol. Francis refused to see the questions in advance. Instead, he engaged with the journalists and made it clear that everyone was free to ask any question. A veteran Vatican journalist who was on the plane later divulged, “We were sitting there, really and truly, with our mouths hanging open.”

What will blossom from these dialogues is uncertain when they begin. On that historic flight, when asked about an alleged gay lobby in the Vatican, Francis uttered his most famous unscripted remark to date, asking, “If someone is gay and is searching for the Lord and has good will, then who am I to judge him?” That statement liberated and consoled countless individuals; it provoked consternation and outrage in others. A space for dialogue was opened.

From the beginning of his pontificate, Francis has methodically offered the church an education in facilitating and participating in authentic dialogue. Engaging in such dialogue may not change the beliefs or opinions of a person. But it may change the person. A wall of suspicion may begin to crumble. A lighthearted moment may quell anxiety. A point of commonality may emerge. Seven years into this pontificate, Catholics may ask themselves, how have they tried to facilitate and participate in authentic dialogue, without fear, in search of the truth?

Sebastian Gomes
@SGomesAMERICA
Show Comments ()
Join the conversation: Login or create an account
Before you can comment, you need to update your profile to include your first and last name, as required in our comments policy. Then reload this page and you'll be set up for commenting. Update your profile
Show Comments ()
Comments are automatically closed two weeks after an article's initial publication. See our comments policy for more.