The black Catholic nun every American should know 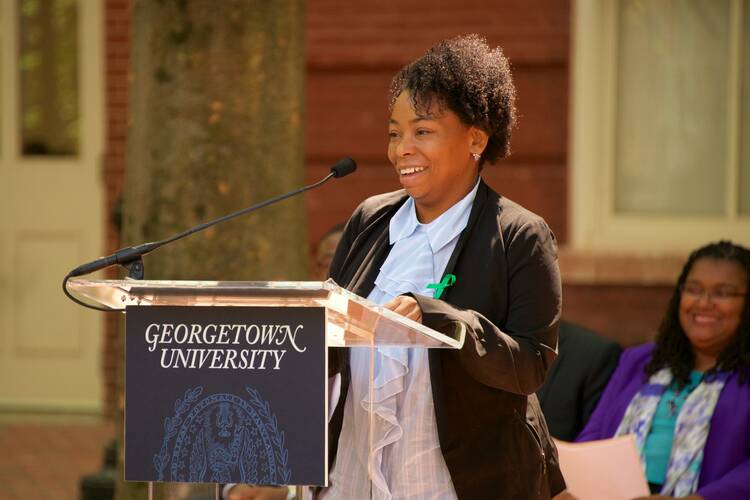 When asked to offer examples of the church’s faithful whose experiences are essential to our understanding of American Catholic history, there is one black woman’s story that I always tell.

The extraordinary journey of Anne Marie Becraft, who became Oblate Sister of Providence Mary Aloysius, is one that powerfully illustrates the foundational presence of black Catholics in the U.S. church and nation at large. It is also a story that disrupts and revises much of what has been said and written about the American Catholic experience.

In recent years, Becraft’s name has been resurrected in the nation’s memory in connection with Georgetown University. In 2017, Georgetown officially renamed a building, which had previously honored a Jesuit slaver, after Becraft as a part of the institution’s long-term effort to confront and atone for its slaveholding past.

The extraordinary journey of Anne Marie Becraft is one that powerfully illustrates the foundational presence of black Catholics in the U.S. church and nation at large.

Although Georgetown’s decision to honor Becraft faced criticism by detractors who speciously argued that the pioneer black nun had no real connection to the university, Becraft was more than a worthy choice.

In 1820, at 15 years old, Becraft established one of the earliest schools for black children in Washington. Seven years later, Becraft won the support of a Jesuit priest who underwrote the expansion of her academy for free girls, which became the nation’s first black Catholic school, and relocated it across from the Visitation Convent.

Called to religious life but barred entry into the early white sisterhoods ministering in Washington due to her color, Becraft turned over the administration of her school, then known as the Georgetown Seminary, to a former student and entered the historically black Oblate Sisters of Providence in Baltimore in 1831. Two years later, Becraft died at age 28.

Despite her relatively short life, the significance of Becraft’s insurrectionary presence and that of her black Catholic girls’ academy cannot be overstated.

Despite her relatively short life, the significance of Becraft’s insurrectionary presence and that of her black Catholic girls’ academy within sight of the Visitation Convent, where more than 80 enslaved people labored against their wills, and Georgetown, where more than 250 did the same, cannot be overstated.

Neither can the reality of Becraft’s connection to the prominent and slaveholding Carroll family, which gave the U.S. church its first bishop and Georgetown University its founder in John Carroll.

It has long been known that Anne’s father, William, was the son of a free woman of color who worked as a housekeeper for Charles Carroll of Carrollton, Archbishop John Carroll’s cousin and the only Catholic signer of the Declaration of Independence.

However, the first published history of the African Methodist Episcopal Church, written by Bishop Daniel Payne (who married Anne’s sister Julia in 1847), documents that William was in fact Charles Carroll’s “natural son,” making Anne his granddaughter.

When Becraft established her school in the midst of the nation’s and the church’s slaveholding elite, she powerfully declared that the lives of black people, especially women and girls, mattered.

Although Becraft is not the only African-American nun with blood ties to the nation’s founding European Catholic families, she is the only American nun, black or white, known to possess a birthright to the early U.S. church and nation.

When Becraft established her school in the midst of the nation’s and the church’s slaveholding elite, she powerfully declared that the lives of black people, especially women and girls, mattered. Even more miraculous, Becraft’s documented “uncommon intelligence” and “extraordinary piety” forced members of the slaveholding church to take notice and offer support.

As we celebrate women’s history month this March, I encourage every person to commit the name of Anne Marie Becraft and her revolutionary fight against slavery and racism in the American Catholic Church and nation at large to memory.

Becraft’s life not only demonstrates that black people have never been marginal to the story of U.S. Catholicism but also reveals that black women and girls were the first of the faithful to forge a formal tradition of Catholicism free from the evils of white supremacy and racial exclusion.

If we are to ever overcome the sin of racism and the enduring legacies of slavery and segregation within church boundaries, it is to the largely unsung history of black Catholic women and girls and their emancipatory traditions of the faith that we must finally look.

This column was published with the permission of Catholic News Service.

@BlkNunHistorian
Show Comments ()
Join the conversation: Login or create an account
Before you can comment, you need to update your profile to include your first and last name, as required in our comments policy. Then reload this page and you'll be set up for commenting. Update your profile
Show Comments ()
Comments are automatically closed two weeks after an article's initial publication. See our comments policy for more.