The untold history of black nuns in the United States 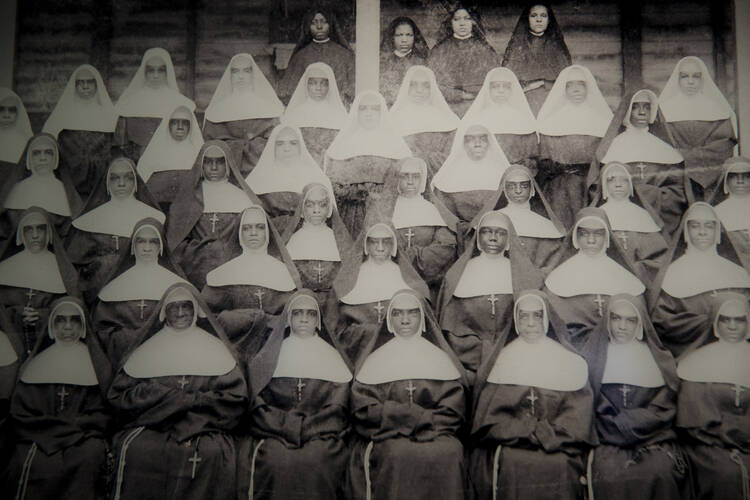 An undated photo of the Sisters of the Holy Family in New Orleans is seen at the National Museum of African American in Washington Jan. 5, 2017. February is African American history month. (CNS photo/Tyler Orsburn)

Ask most people what they know about black Catholic sisters, and they will probably murmur something about “Sister Act.” Dr. Shannen Dee Williams did, too, until she began digging into communities’ archives and uncovering the previously hidden lives of African-American women religious. Now she’s telling those stories in a forthcoming book (with an amazing title), Subversive Habits.

Shannen tells us about the incredible resilience and deep faith of black Catholic women in the face of racism, discrimination and exclusion. We ask her how these stories affected her own faith and what racial reconciliation in the church looks like today.

In Signs of the Times, we’ve got fun Catholic World Cup facts, an update on the synod on young adults and Pope Francis’ controversial comments on abortion and Nazis. Finally, we discuss the Trump administration’s policy of separating children from their parents at the border—and what you can do to help.

Have you checked out our Facebook page yet? Starting today, we’ll be asking for your consolations and desolations there. You can also find us on Twitter @jesuiticalshow, support us on Patreon and send us an email at jesuitical@americamedia.org.

Faith and the 2018 World Cup: little-known Christian details about soccer (football!) stars
Meet the nuns helping save a sacred species from extinction
Synod working document: Young Catholics need a church that listens to them
Pope Francis says abortion is ‘same thing’ as Nazi eugenics
Catholic leaders denounce Sessions’s asylum decision: ‘We have truly lost our moral compass.’
Father James Martin: Five things you can do to help immigrants at the border