Podcast: Rutilio Grande would not have been beatified a few decades ago. What changed?

Podcast: Rutilio Grande would not have been beatified a few decades ago. What changed? 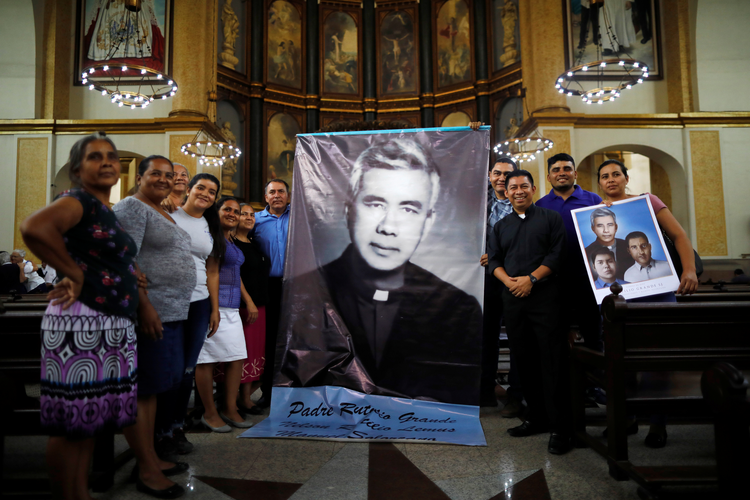 People pose with images of Jesuit Father Rutilio Grande following a Mass in his honor at a church in San Salvador, El Salvador, Feb. 22, 2020. The Vatican announced Feb. 22 that Pope Francis has recognized the martyrdom of Father Grande and two companions who were murdered en route to a novena in 1977. (CNS photo/Jose Cabezas, Reuters)

This week’s “Inside the Vatican” explores the relationship between faith, global politics, and the Catholic understanding of sainthood.

First up, America’s Vatican correspondent Gerard O’Connell and I discuss Pope Francis’ recent address to the Mediterranean bishops in the Southern Italian city of Bari. Speaking to a diverse group from North Africa, the Middle East, and Southern Europe, the pope addressed the many conflicts in the Mediterranean and North Africa that have displaced millions of refugees, and the global rise of populism that has swelled up in response. Francis stressed that the Gospel calls for peacemaking; on “Inside the Vatican,” we discuss the challenges that brings.

How can I reconcile the good and evil of Jean Vanier?
Colleen Dulle

Up next, the Vatican has taken a groundbreaking step towards making peace with another global power that is at times hostile to it: China. Holy See and Chinese foreign ministers met for the first time in more than 70 years. We explain how this meeting took the Vatican’s relationship with China to a new level and how much more lies beyond the surface of this diplomatic discussion.

We also give an update on the new credible allegations of abuse against L’Arche founder Jean Vanier. I express my disappointment with the revelations about a man who was considered a ‘living saint,’ and Gerry explains how it is a sign of progress that Catholic institutions are taking transparency measures themselves rather than waiting on external investigations.

Finally, we turn to a canonization cause that has long been in the works: that of Jesuit Father Rutilio Grande. Pope Francis recognized Father Grande’s death as a martyrdom last week, and Gerry explains how the church’s understanding of sainthood has grown to include those who work for social justice, who in the past may have been dismissed as primarily political actors.