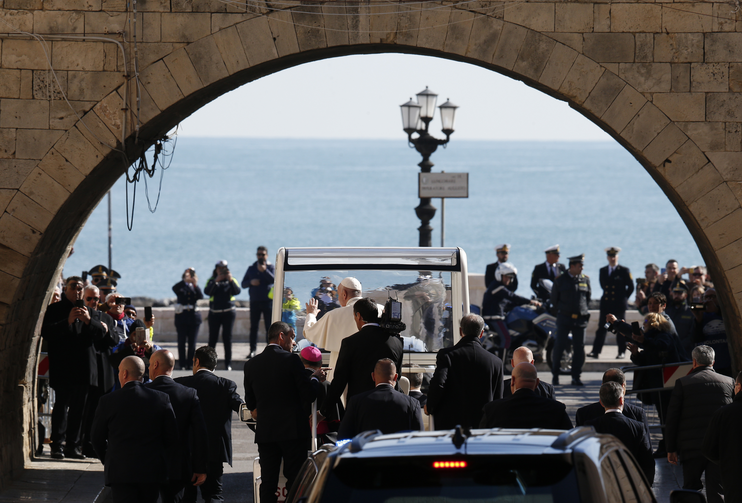 Pope Francis leaves through an arch of the old city after attending the meeting, "Mediterranean, Frontier of Peace," at the Basilica of St. Nicholas in Bari, Italy, on Feb. 23, 2020. (CNS photo/Paul Haring)

Seeking to promote peace in the region around the Mediterranean Sea, Pope Francis spoke out against those who conduct or foster armed conflict in the area, and against populist leaders who stir up fear and hate towards migrants and advocate the building of walls. He did so when he addressed a gathering of some 50 bishops from the 19 countries bordering the Mediterranean Sea, in the southern Italian city of Bari on Sunday morning, Feb. 23.

“The preaching of the Gospel cannot be detached from commitment to the common good; it impels us to act tirelessly as peacemakers,” Francis stated. Aware that fighting continued in Libya and northern Syria even as he spoke, he highlighted the fact that “the Mediterranean region is currently threatened by outbreaks of instability and conflict, both in the Middle East and different countries of North Africa, as well as between various ethnic, religious or confessional groups.”

Significantly, he added, “Nor can we overlook the still unresolved conflict between Israelis and Palestinians, with the danger of inequitable solutions and, hence, a prelude to new crises.” His reference to “inequitable solutions” appears to be his first public comment on the much-criticized proposal presented by President Donald Trump as a solution to the more than 70-year-old conflict.

Then in words that would have particular significance in the region, Francis strongly denounced war that “by allocating resources to the acquisition of weapons and military power, diverts those resources from vital social needs, such as the support of families, health care and education.” Saint John XXIII said “war is contrary to reason,” today Francis added, “[war] is genuine madness.... It is a kind of folly to which we cannot resign ourselves: war can never be considered normal.”

Francis read his text, seated at a table in front of the altar of the church of Saint Nicholas, which dates to the 11th century. He addressed bishops at the end of their four-day gathering at which they had discussed how to foster peace, promote dialogue between the region’s peoples, religions and cultures, and cooperate together to create a climate of hospitality for refugees and migrants.

The gathering, which began on Feb. 19 and ends today, was organized by the Italian Episcopal Conference. Francis thanked its president Cardinal Bassetti for inviting him. He recalled it was his second visit to Bari, a city “so important for its links with the Middle East and Africa,” that “always fostered ecumenical and interreligious dialogue, working tirelessly to create bonds of mutual esteem and fraternity.” He last came here in July 2018 to meet leaders of the Christian communities of the Middle East “to help our sister Churches to journey together and feel closer to one another.”

Francis recalled that historically the Mediterranean has been a crucial area for the transmission of the faith and the promotion of peace.

In his talk, Francis recalled that historically the Mediterranean has been a crucial area for the transmission of the faith and the promotion of peace, “it is the physical and spiritual locus where our civilization took shape as a result of the encounter of diverse peoples.” Today, he said, “globalization has highlighted the role of the Mediterranean as a crossroads of interests and important social, political, religious and economic currents. The Mediterranean remains a strategic region whose equilibrium has an impact on the other parts of the world.”

Francis reminded the bishops that “the ultimate goal of every human society is peace” and added, “there is no real alternative to peacemaking.”

He drew attention to the many who suffer today in the Mediterranean region, including “those who are fleeing war or who have left their homelands in search of a humanly dignified life.” He noted that “the number of these brothers and sisters—forced to abandon their loved ones and their lands, and to face conditions of extreme insecurity—has risen as a result of spreading conflicts and increasingly dramatic environmental and climatic conditions” and said, “it is easy to anticipate that this phenomenon, with its momentous developments, will have a profound effect on the Mediterranean, for which states and religious communities must not be found unprepared.”

He noted that today in different social contexts “there is a growing attitude of indifference and even rejection that reflects the mentality, condemned in many of the Gospel parables, of those who, caught up in their own wealth and freedom, are blind to others who, by speaking out or by the very fact of their poverty, are pleading for help.”

Francis denounced the fact that “fear is leading to a sense that we need to defend ourselves against what is depicted in demagogic terms as an invasion.”

Francis denounced the fact that “fear is leading to a sense that we need to defend ourselves against what is depicted in demagogic terms as an invasion” and said, “the rhetoric of the clash of civilizations merely serves to justify violence and to nurture hatred.” He said, “the failure or, in any case, the weakness of politics, and factionalism are leading to forms of radicalism and terrorism.”

He urged the bishops of the Mediterranean region to “speak out to demand that government leaders protect minorities and religious freedom” and said, “the persecution experienced above all—but not only—by Christian communities is a heart-rending fact that cannot leave us indifferent.”

While “acceptance and dignified integration is not easy,” Francis said, “yet it is unthinkable that we can address the problem by putting up walls.” Then, departing from his prepared text he said, “I feel fear when I hear some discourses of some leaders of the new forms of populism, it brings to mind speeches that sowed fear and then hate in the decade of the 1930s of the last century.” By putting up walls, he said, “we cut ourselves off from the richness brought by others, which always represents an opportunity for growth. When we reject the desire for fellowship present deep within the human heart and is part of the history of peoples, we stand in the way of the unification of the human family, which despite many challenges, continues to advance.”

Francis told the bishops, “may we not allow a spirit of nationalism to spread the opposite view, namely, that those states less accessible and geographically more isolated should be privileged. Dialogue alone enables us to come together, to overcome prejudices and stereotypes, to tell our stories and to come to know ourselves better.”

Dialogue alone enables us to come together, to overcome prejudices and stereotypes, to tell our stories and to come to know ourselves better.

He said that “for those who believe in the Gospel, dialogue is advantageous not only from an anthropological but also from a theological standpoint.” He said, “we need to develop a theology of acceptance and of dialogue leading to a renewed understanding and proclamation of the teaching of Scripture” but, he added, “this can only happen if we make every effort to take the first step and not exclude the seeds of truth also possessed by others.”

Pope Francis recalled that “all too often, history has known conflicts and struggles based on the distorted notion that we are defending God by opposing anyone who does not share our set of beliefs.” Indeed, he added, “extremism and fundamentalism deny the dignity of the human person and his or her religious freedom, and thus lead to moral decline and the spread of an antagonistic view of human relationships.”

He said all this “shows us the urgent need of a more vital encounter between different religious confessions, one motivated by sincere respect and a desire for peace,” and recalled that the Document on Human Fraternity signed at Abu Dhabi states that “the authentic teachings of religions invite us to remain rooted in the values of peace; to defend the values of mutual understanding, human fraternity and harmonious coexistence.”

Francis said, “religious groups and different communities can cooperate more actively in helping the poor and welcoming immigrants, in such a way that our relationships are motivated by common goals and accompanied by active commitment.” In this way, he said, “Those who together dirty their hands in building peace and fraternal acceptance will no longer be able to fight over matters of faith, but will pursue the paths of respectful discussion, mutual solidarity, and the quest for unity.”