How can I reconcile the good and evil of Jean Vanier? 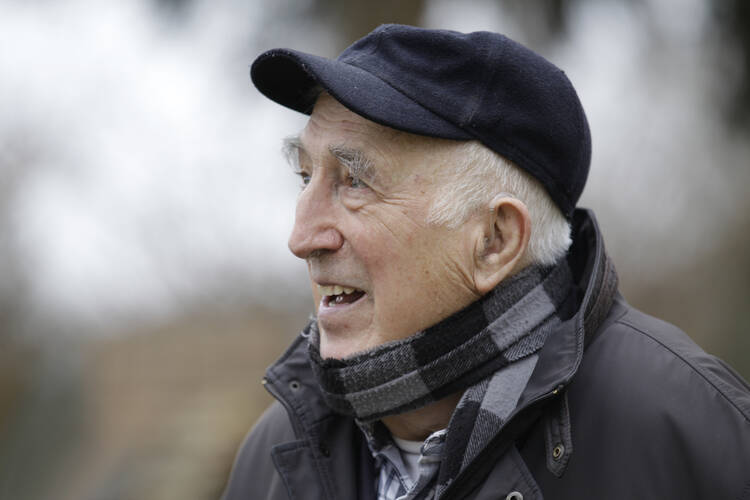 I keep a photo of Jean Vanier on my desk. It is painful to look at today.

I’ve written almost completely uncritically about the founder of L’Arche several times at America: I called him a “revered spiritual master and prophetic voice” whose messages “always bear repeating” in a review of his last book; I wrote America’s obituary of Vanier; I teared up on camera while talking with Tina Bovermann of L’Arche USA about Vanier’s life.

Now, L’Arche has released an internal report detailing credible allegations of sexual abuse against Vanier by six non-disabled women. The report says that Vanier initiated sex in the context of spiritual direction and offered “highly unusual spiritual or mystical explanations used to justify these behaviors.” This kind of behavior echoes the sexual abuse perpetrated by Vanier’s spiritual mentor, Father Thomas Philippe. The new L’Arche report also shows that Vanier lied about how much he had known about accusations against Father Philippe.

Ms. Bovermann, the L’Arche spokeswoman I interviewed just after Vanier’s death, spoke to my colleague Michael J. O’Loughlin about the abuse allegations against Vanier: “I can’t wrap my head around it,” she said.

I don’t mean that I disbelieve the women who brought these accusations forward. The public excerpts of their testimonies were harrowing, and I trust the thoroughness of the third-party investigation. What I mean is that it is difficult for me to reconcile Vanier’s abuse with my long-held image of him as a saint.

I was introduced to Jean Vanier’s thought as a senior in college, when I was stressed about my impending graduation to “the real world.” Would I make enough money? Would I move up quickly in my career? Would people think well of me?

One night, I sat with my friend Katie, who had recently returned from a year at a L’Arche community in Ireland. In response to my anxieties, she asked if I’d ever heard of Jean Vanier. She explained to me his idea that, while society tells us we will only find happiness by climbing the ladder of wealth and prestige, true Christian happiness comes from climbing down the ladder, choosing to give up power and money in order to live in community and solidarity with the poor and outcast.

The idea was a revelation. I chewed over it for hours in my prayer and writing and tried to apply it, however poorly, in my decision-making. I deeply wanted the true happiness Vanier pointed to. I read his books and listened to his interviews slowly and meditatively and urged others to do the same. After he died, I hung a photo of him on my desk. Like many, I believed he was a saint.

For All Souls Day, here are some of the holy folks who keep me company while I work: Jean Vanier, Madeleine Delbrêl, and Dorothy Day. pic.twitter.com/SIzwFxeHti

Part of me wonders now if I was foolish, if I should have known better than to valorize any Catholic this way after watching Theodore McCarrick’s precipitous fall from grace in 2018 or even watching St. John Paul II’s record on sexual abuse be called into serious question after hearing the crowds chant “Santo Subito” in 2005. If such widely respected men could commit decades of abuse or turn a blind eye to allegations, why should I have believed Jean Vanier could not do the same?

I think of the women who had to endure the trauma of hearing a man who had sexually manipulated them be called a “living saint” when he was alive and as the world eulogized him. Although none of the women’s allegations were public until this morning, perhaps if those of us praising him had thought more critically about Vanier’s relationship with Father Philippe, we would at least have been more hesitant to canonize Vanier in our popular imagination.

I can no longer in good conscience call Jean Vanier a saint, but I cannot accept the disturbing truth about him as proof, as some have understood it, that sanctity does not exist.

This kind of critical thinking will be vital as those of us who admired Vanier struggle to reconcile the good he did with the abuse he perpetrated. It is difficult, but possible and necessary, to hold the truth of both Vanier’s good and evil at the same time. Holding these facts in tension both invites, as the leaders of L’Arche International wrote, “mourn[ing] a certain image we may have had of Jean” and raises important concerns about who holds power in the church, the ways that power can corrupt those who hold it and the disturbing links between spiritual and sexual abuse in so many similar cases in the church. L’Arche, especially, faces a long road ahead of reimagining its past and protecting against future abuses.

Mourning and grappling with the upsetting paradox of Jean Vanier has made me angry, but I am trying to resist letting it drive me to despair. I can no longer in good conscience call Jean Vanier a saint, nor will I hypothesize about any conversion he may have had before or after his death, but I cannot accept the disturbing truth about him as proof, as some have understood it, that sanctity does not exist. Rather, I think it challenges us to consider our own and others’ simultaneous capacity for profound goodness and evil, to seek models of holiness away from the world’s spotlight and to pursue holiness ourselves far from the spotlight, at the bottom of the ladder.