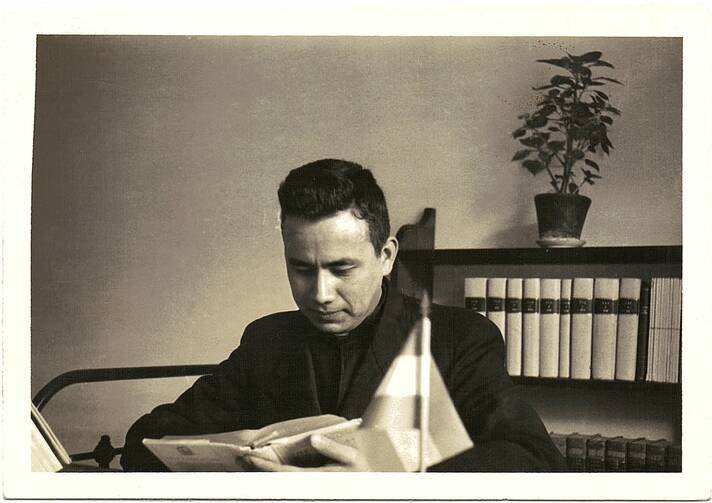 The Vatican announced today that Pope Francis has authorized the Congregation for the Causes of the Saints to publish the decree regarding "the martyrdom of the Servants of God Rutilio Grande García, professed priest of the Society of Jesus, and two lay companions, killed in El Salvador, in hatred of the faith, on March 12, 1977." The pope did so when he received the prefect of the congregation, Cardinal Angelo Becciu, in audience on Feb. 21.

The recognition of their martyrdom means that they may soon be beatified—that is, declared “blessed”—most likely in a ceremony in El Salvador later this year.

Rutilio Grande was born in El Paisnal, El Salvador, on July 5, 1928. He first entered the archdiocesan minor seminary and at the end of his course joined the Society of Jesus on Sept. 5, 1945. He followed the Jesuit formation in various countries, including Venezuela, Ecuador, Spain and Belgium. He was ordained on July 30, 1959.

While serving as a parish pastor, he was also engaged in the formation of young Jesuits preparing for the priesthood. He was an innovator, beginning a process of pastoral immersion for seminarians and later initiating base communities of spiritual and social development among the campesino communities he served. This work of evangelization and social awareness made his ministry suspect to El Salvador’s ruling oligarchy and made Grande a target.

Grande was the first priest to be killed before the country’s civil war, but others would soon suffer the same fate.

During his active ministry of evangelization in El Salvador, he courageously stood with El Salvador’s campesinos, teaching them how to become advocates for their own social and spiritual liberation. He suffered public persecution and was eventually assassinated alongside two campesino friends: the lay catechist Manuel Solórzano, 72, and Nelson Rutilio Lemus, just 16. The attack occurred while they were driving in a Volkswagen Safari from their parish in Aguilares to El Paisnal, the village of his birth, to celebrate the novena of San José.

They had picked up three small children on the road, who were in the back of the car when a group of men ambushed Grande and his companions, leaving 12 bullets in his body. The three terrified children were not injured physically and were allowed to escape from the back of the car.

Grande was the first priest to be killed before the country’s civil war, but others would soon suffer the same fate. His violent death greatly disturbed his friend, Óscar Romero, who had been installed as archbishop of San Salvador just three weeks before; indeed, the loss had a transformative effect on St. Óscar Romero’s life and ministry. Three years later, he too would die a martyr’s death.

After the slaying, Archbishop Romero celebrated Mass for the victims, together with the Jesuit provincial, in the little church of El Paisnal that evening. The three bodies were placed in front of the altar. He celebrated Mass there again the next morning, attended by many campesinos, and proclaimed that the following week one Mass would be held for all of El Salvador in the Metropolitan Cathedral, a gesture that accompanied the archbishop’s demand for an official investigation into Grande’s assassination.

“The martyrs give witness to the efficiency of the one redemptive sacrifice,” he said, “the sacrifice of life given out of love and with love, as Jesus did, to offer liberation and reconciliation. It is a sacrifice which, through the power of the Spirit, can also be assumed by those who accept the invitation to put into practice the Word of God and undertake the path of following his Son.”

The cause for the beatification of Father Rutilio Grande and his companions was opened in March 2014 by the archbishop of San Salvador, José Luis Escobar. It concluded in August 2016. The cause was then transmitted to Rome and finally resulted in today’s good news.