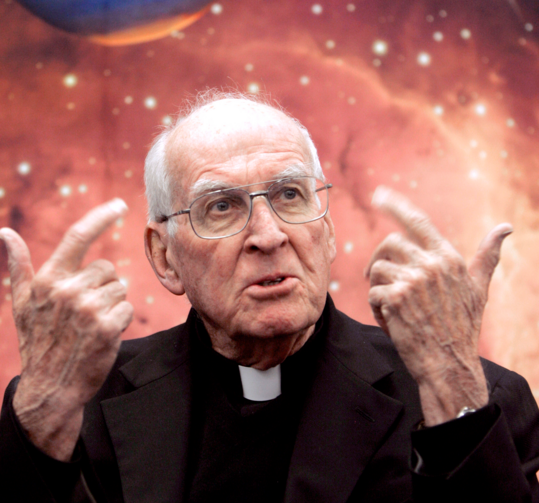 Editor’s note: This reflection has been adapted from a presentation at LeMoyne College Chapel on Feb. 17, 2020 at the funeral of Mass for George Coyne, S.J.

The New York Times ran an obituary of George Coyne, S.J., last Sunday, and they emphasized his activities to support Galileo and evolution in the church. But when I wrote about him for L’Osservatore Romano, I didn’t even mention those things. I’d completely forgotten about that episode to be honest. There was so much more to say.

I could list all his scientific work, his writings on faith and science, his honors and degrees. That would take about 20 minutes—if I read fast. But none of those are George.

I knew George long before he knew me: I knew George from listening to his homilies at Sts. Peter and Paul Church in Tucson. I was a grad student at the University of Arizona’s Lunar and Planetary Lab in the 1970s, when George was a young professor there.

The Lunar Lab was a wildly dysfunctional place in those days, with lots of infighting among the faculty, and I was living in a house with other grad students working for the various feuding professors. We would keep each other posted on what was going on in the department, and my contribution was to take the temperature of the fighting based on what George had preached on that morning.

I could list all his scientific work, his writings on faith and science, his honors and degrees. But none of those are George.

Eventually the other astronomers agreed to have George become the director of the Catalina Observatory, even though he was junior to all the rest of them. He was the only one that they all trusted. And liked.

Chris Corbally, S.J., another astronomer at Vatican Observatory, knew George even longer than I did. The first reading at George’s funeral Mass from Proverbs 8:22-31 was his idea; as it describes Wisdom, it also describes George’s relation to creation:

“The Lord brought me forth as the first of his works,
before his deeds of old;
I was formed long ages ago,
at the very beginning, when the world came to be.
When there were no watery depths, I was given birth,
when there were no springs overflowing with water;
before the mountains were settled in place,
before the hills, I was given birth,
before he made the world or its fields
or any of the dust of the earth.
I was there when he set the heavens in place,
when he marked out the horizon on the face of the deep,
when he established the clouds above
and fixed securely the fountains of the deep,
when he gave the sea its boundary
so the waters would not overstep his command,
and when he marked out the foundations of the earth.
Then I was constantly at his side.
I was filled with delight day after day,
rejoicing always in his presence,
rejoicing in his whole world
and delighting in mankind.

George, too, would take in all the marvels of creation, at God’s side observing it all, “filled with delight day after day, rejoicing always in his presence, rejoicing in his whole world and delighting in mankind.” Not only rejoicing in the world; but delighting in humankind.

He completely disarmed the Richard Dawkinses of the world who tried to debate him because they were not prepared for someone who wasn’t mad at them, who didn’t want to argue at them.

People liked George because he liked people. (I’ll be honest, I knew some people who didn’t like him; they were generally people who didn’t like themselves, either.) He completely disarmed the Richard Dawkinses of the world who tried to debate him because they were not prepared for someone who wasn’t mad at them, who didn’t want to argue at them. He honestly wanted to learn from them and hear what they had to say. If he would argue—and he was not afraid to do so—it would be with, not against.

That trait was a part of his scientific life and also his Jesuit life. We hear in Matthew’s gospel (19:13-29) the famous story of the rich young man who wants to know, “What good thing must I do to get eternal life?” He’s taken aback by the answer he hears. It’s not enough to follow the commandments, to just do what we’re expected to do. Rather we have to be ready to give up all our other possessions, “all our liberty, our memory, our understanding, and our entire will, all you have and call your own.”

Give up your understanding? Yes, indeed. That’s what a scientist does; you have to be willing to give up being satisfied with the way you understand something in order to understand it in a new and deeper way.

For the sake of their glorious obsession with science, like George, many scientists (including those who live celibacy even if they haven’t vowed it) have given up “houses or brothers or sisters or father or mother or wife or children or fields”—how many Jesuit scholars have been willing to give up their fields!—only to receive “a hundred times as much and…eternal life.”

In fact that passage about the rich man in Matthew is introduced by the episode where people brought little children to Jesus; and when the disciples rebuked them, Jesus said, “Let the little children come to me, and do not hinder them, for the kingdom of heaven belongs to such as these.”

George was a capo, a boss; and a pastor; and role model and friend to an entire generation of young astronomers on their way to their scientific careers.

George loved to do baptisms and weddings for the children of his scientist friends; and funerals as well. He was a pastor to astronomers. His secretary in Italy, Rita, married an American telescope engineer (George did the wedding) and when their little girls (George did the baptisms) would visit their mama at work, they would run into George’s office with delighted cries of “paco, paco!”

They really were trying to say “capo, capo”, which is the Italian for “boss;” that’s what Rita called him. And George loved it. Those little girls, by the way, are both scientists themselves now.

George was a capo, a boss; and a pastor; and role model and friend to an entire generation of young astronomers on their way to their scientific careers. Every two years another class would come to spend a month with us at our summer schools. I’ve gotten more than 100 emails from alumni and other colleagues, from every corner of the globe. From him they learned astronomy but also the joy of learning and the love of sharing what we’ve learned with each other.

There are three things that George would always tell us. First, his instruction to each of us upon arriving at the observatory was, simply: “Do good science.” The science itself was the goal. And he gave us the space to make it happen. But what made science itself a worthy goal?

And George would say, “In us, the universe has become self-aware.” Indeed, as St. Paul reminds us in the second reading (Romans 8:18-27), “creation waits in eager expectation for the children of God to be revealed.” Creation could not be revealed until we were ready to receive that revelation. We become the children of God when we become aware of God’s creation and thus, in it, of God’s presence.

In Psalm 8 the psalmist marvels before God: “What is mankind that you are mindful of them, human beings that you care for them? You have made them a little lower than the angels and crowned them with glory and honor.” And what had the psalmist done to earn this crown of glory? It was to “consider your heavens, the work of your fingers, the moon and the stars, which you have set in place…”

It is by being aware of the universe that we can become aware of the Creator. We, ourselves, creatures of that very same creator, become the consciousness of creation. And in that truth we find joy. That’s where we find God.

That was George. And that is why we found God in him. 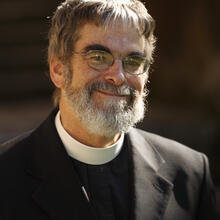