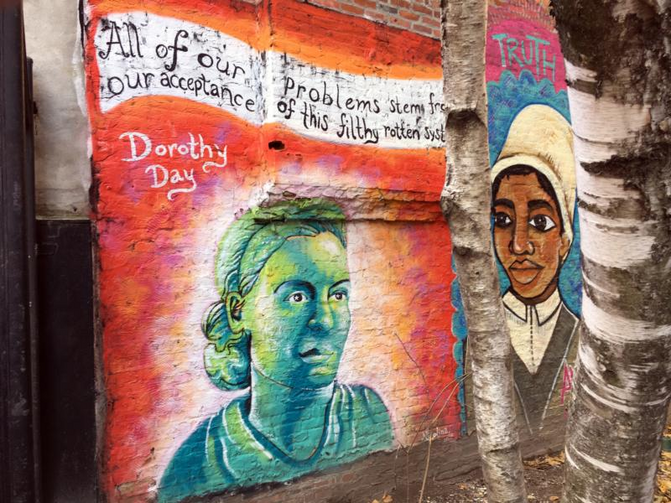 A mural depicting social activist and sainthood candidate Dorothy Day is seen Dec. 4 in a park near the Church of the Nativity in New York City Dec. 4, 2018. (CNS photo/Gregory A. Shemitz)

WASHINGTON (CNS) -- If you met Dorothy Day, you were changed, said panelists at a Jan. 27 discussion following an advance screening of a new documentary, "Revolution of the Heart: The Dorothy Day Story," which profiles the co-founder of the Catholic Worker Movement.

And if you were changed, they noted, you had the ability to make change yourself.

"Dorothy taught me to pay attention and feel the sufferings of others," said Martha Hennessy, one of Day's granddaughters, during the forum at Georgetown University in Washington.

Hennessy is a member of the Kings Bay Plowshares 7. They face prison terms of up to 20 years after being convicted on charges related to their faith-based nonviolent and symbolic disarming of a Trident submarine's nuclear weapons in Georgia. She had a "curfew" of 8:30 p.m., and left following the discussion.

Robert Ellsberg, publisher of Orbis Books and editor of Day's writings, recalled, "I didn't know I was going to spend so much time there" at Mary House, the first Catholic Worker house of hospitality in New York City, after he decided to take a year off from Harvard College. Attracted to the Catholic Worker's peace witness, "I knew there was a kind of learning I couldn't do in school," he said. Day made Ellsberg, then 20, editor of the Catholic Worker, its monthly newspaper.

As Kate Hennessy, another of Day's granddaughters, said in the documentary, "If you spend any time up close and personal with Dorothy Day, you never know what hit you." For Ellsberg's part, he said he's spent the rest of his life "trying to share with the world what had hit me."

Carolyn Zablotny, leader of the Dorothy Day Guild and the effort to have Day canonized, spoke about the evolution of her faith.

"At my Catholic grade school, I had my faith memorized. In college I intellectualized it," Zablotny said. "When I went to the Catholic Worker, when I saw a poor woman wrapped in layers and layers and layers of dirty clothes, I got what the Gospel was about."

Were Day to live long enough to see Pope Francis as the successor of Peter, "I think she'd be overjoyed," said Martin Doblmeier, who made the "Revolution of the Heart" documentary.

"I think she would have been cheering about the comments about the man when he went to Japan" and denounced the threat to use nuclear weapons. Pope Francis is, "in some way, a fulfillment of what she had been championing all her life," added Doblmeier, president and founder of Journey Films.

Martha Hennessy agreed, calling Pope Francis "a pope after her own heart. She herself talked about the necessity to do more than demonstrate and speak. There's also the necessity to act, and to act without fear. Fear is used to control us. What do we do to overcome that challenge?"

Ellsberg called Pope Francis "the pope Dorothy dreamed up. ... He reads the Gospel through a Franciscan lens, with the eye on the poor," he said, "going out to the peripheries to touch the wounds of Christ. That's what Dorothy did every day."

Popes are one thing, Ellsberg added, but presidents are another. "She didn't spend a lot of time talking about prsidents, be it (Richard) Nixon or LBJ (Lyndon B. Johnson)," he said. "Dorothy was a woman of the beatitudes. She lived the beatitudes."

Hennessy said her grandmother saw her role as "calling Christians to love God with all your heart and all your soul and love your neighbor as yourself." But in a weapons-laden world, she added, "we have a complicity," she added. "We cannot let ourselves off so easily, if we want to call ourselves Christians, 98% of the nuclear arsenal is in the hands of white Christians."

But by another token, "Life is beautiful. I've lived a privileged life," Hennessy said. "It was time for me to step up and do what I could do. ... There's a lot of joy in standing up to the most powerful force on earth and giving oneself over. I'm in the hands of God, and it's OK."

"We're all called to be saints. Dorothy understood that before Vatican II," Zablotny said. Advocating for Day's sainthood "is a way of getting her story told," she added.

But the church generally requires two authenticated miracles before it pronounces a new saint. In that instance, Ellsberg said, "God will supply a miracle if God wants to."