Pope Francis: “I will never grow tired of condemning every form of anti-Semitism” 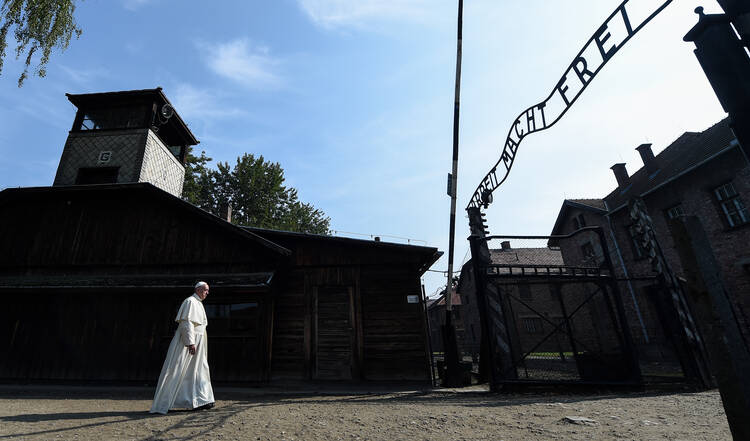 His remarks came on Jan. 20 during an address to a delegation from the Simon Wiesenthal Center in the Vatican. The center, established in 1977 by Rabbi Marvin Hier, is today is “a global human rights organization researching the Holocaust and hate in a historic and contemporary context.”

In his talk, Francis reminded the delegation that this resurgence of anti-Semitism has to be viewed in the wider “troubling” context where “in many parts of the world, an increase in selfishness and indifference, lack of concern for others and the attitude that says life is good as long as it is good for me, and when things go wrong, anger and malice are unleashed.” He said this attitude of indifference “creates a fertile ground for the forms of factionalism and populism we see around us, where hatred quickly springs up.”

Pope Francis firmly condemned “every form of anti-Semitism” on the eve of the commemoration of the 75th anniversary of the liberation of the Auschwitz-Birkenau concentration camp.

“To tackle the cause of the problem,” he said, “we must commit ourselves also to tilling the soil in which hatred grows and sowing peace instead.” He emphasized that “it is through integration and seeking to understand others that we more effectively protect ourselves.”

“It is urgent to reintegrate those who are marginalized, to reach out to those far away, to support those ignored for lack of resources or funds and assist to those who are victims of intolerance and discrimination,” Francis said.

He recalled that the Simon Wiesenthal Center “seeks to combat all forms of anti-Semitism, racism and hatred toward minorities” and for many decades has had contacts with the Holy See in a shared desire “to make the world a better place in respect for human dignity, which is due to every person in equal measure, regardless of his or her ethnic origin, religion or social status.” He declared that “it is essential to teach tolerance, mutual understanding and freedom of religion and the promotion of peace within society.”

Noting that the Wisenthal Center “keeps alive the memory of the Holocaust,” Pope Francis drew attention to the fact that Jan. 27 will mark the 75th anniversary of the liberation of Auschwitz-Birkenau. He recalled that he went to that infamous site in 2016 “to reflect and to pray in silence.”

“May the Almighty help us to respect one another and to love one another more and to make the earth a better place by sowing seeds of peace.”

In today’s world, the pope said, “with its whirlwind of activity, we find it hard to pause, to look within and to listen in silence to the plea of suffering humanity. Our consumerist society also squanders words: How many unhelpful words are spoken, how much time is wasted in arguing, accusing, shouting insults, without a real concern for what we say.” Insisting that “silence, on the other hand, helps to keep memory alive,” Francis said, “if we lose our memory, we destroy our future.”

He expressed the hope that next week’s commemoration “of the unspeakable cruelty that humanity learned of 75 years ago may serve as a summons to pause, to be still and to remember.”

“We need to do this,” he added, “lest we become indifferent.”

As part of that commemoration, at the invitation of the president of Israel, Reuven Rivlin, more than 40 leaders from different countries, including presidents, prime ministers and representatives of royal households from Europe, the Americas and Australia, will attend the Fifth World Holocaust Forum, at Yad Vashem in Jerusalem on Jan. 23. Participants include the vice president of the United States, Mike Pence, the United Kingdom’s Prince Charles, the presidents of Germany and France, and the new president of Argentina, Alberto Fernandez, who, like Mr. Pence, will visit Pope Francis at the Vatican in the coming days. The Holy See will be represented by Cardinal Kurt Koch, the president of the Vatican’s Commission for Religious Relations with Judaism.

In his address today, Francis recalled that the Second Vatican Council, in its decree “Nostra Aetate,” “pointed out that Jews and Christians possess a rich spiritual patrimony, which needs to be increasingly appreciated and put at the service of others.” He added: “I feel that we, above all, are summoned, especially today, to such service: not to take the path of distance and exclusion but that of proximity and inclusion; not to force solutions but to initiate ways of drawing closer together. If we do not do this—we who believe in him who from on high remembered us and showed compassion for our weaknesses—then who will?”

Concluding his talk, Francis said, “Let us, too, remember the past and have compassion on those who suffer and in this way till the soil of fraternity.” He ended with a prayer: “May the Almighty help us to respect one another and to love one another more and to make the earth a better place by sowing seeds of peace. Shalom!”