'Nostra Aetate' at 50: celebrating a new era of interreligious dialogue 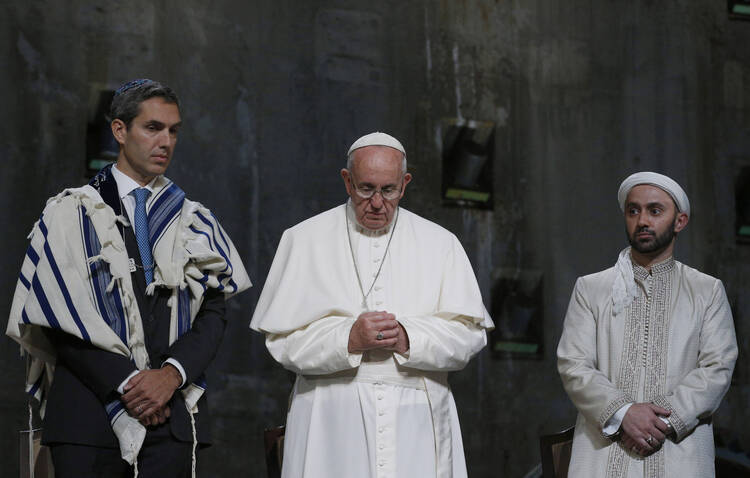 Wednesday Oct. 28 marks the 50th anniversary of "Nostra Aetate," a landmark document that ushered in a new era in interreligious relations, especially between Jews and Christians. America followed the development of the document closely—Jesuit Cardinal Augustin Bea was a primary architect—and paid special attention to the influence of Rabbi Abraham Joshua Heschel. You can read a selection of our coverage below.
Francis X. Clooney, S.J.,  writes about the influence of "Nostra Aetate" at In All Things, saying it "is distinctive even among Vatican II documents, in that it offers a courageously open stance toward other religions that does not dampen its effect by hedging its bold claims with overly cautious qualifications. It is open, and asks us to be open. "
PODCAST: Rabbi Daniel Polish talks about the strides in Jewish-Catholic relations since the publication of 'Nostra Aetatae' on "America This Week."
Understanding ‘the Other’: The legacy of Abraham Joshua Heschel
By Paolo Gamberini, S.J., Oct. 26, 2015

Rabbi Heschel’s approach to Jewish-Christian dialogue is different from that of many other Jewish and Christian theologians involved in the dialogue between these two faiths. He was not interested in discussing controversial issues that still divide Jews and Christians, like the divinity of Jesus, the Trinity or Paul’s Judaism. The aim of interreligious dialogue “is neither to flatter nor to refute one another but to help one another; to share insight and learning, to cooperate in academic ventures on the highest scholarly level, and, what is even more important, to search in the wilderness for wellsprings of devotion, for treasures of stillness, for the power of love and care for man.” Continue reading here.

Rabbi Daniel Polish talks about the strides in Jewish-Catholic relations since the publication of the landmark document 'Nostra Aetatae' on Oct. 28, 1965. Listen here.

Christians And Muslims Together: Interreligious relations and the Synod of the Middle East
By Elias D. Mallon, S.A., Oct. 11, 2010

If relations between Catholic and Muslim leaders are for the most part very good, relations on the local level are often problematic, if not dangerous. Since the publication of “Nostra Aetate” many events have transpired that have profoundly influenced local Christian-Muslim relations for the worse. Continue reading here.

Twenty-seven years after Pope John XXIII announced to the cardinals that he would call an ecumenical council, another pope announced that he would consult with world religious leaders to organize with them a special meeting of prayer for peace, in the city of Assisi. Pope John Paul II chose the same day (Jan. 25), place (the Basilica of St. Paul Outside the Walls) and occasion (the final service of the Week of Prayer for Christian Unity) to make his announcementsurely no accident of history. Pope John’s surprising news would transform Catholicism. Pope John Paul’s announcement would change the character of the Catholic commitment to interreligious dialogue. Continue reading here.

The history of the past 40 years confirms the importance of the definitive condemnation of anti-Semitism in Nostra Aetate for the development of closer Catholic-Jewish relations. Today, however, in our time, international terrorism poses a new and dangerous challenge to the document’s call for mutual respect for all non-Christian religions. Nostra Aetate urged Christians and Muslims to forget the past and to strive sincerely for mutual understanding. On behalf of all mankind, let them make common cause of safeguarding and fostering social justice, moral values, peace and freedom. Today interreligious dialogue must support Islamic leaders in their necessary campaign to reclaim their religious tradition from fascist fundamentalists who recklessly promote a clash of civilizations ("In Our Time," Editorial). Read the full issue here.

"Nostra Aetate" helped open the Catholic Church to dialogue with all religions and to see improved relationships, not only as human efforts, hut as God's mysterious initiative in history. Continue reading here.

Christians and Jews share a common spiritual patrimony, and that heritage should foster mutual respect—said Vatican II. Since 1965, this goal has been partially achieved. Continue reading here.

The moment had come for Professor Heschel candidly to describe to the Pope how Jews felt about the past. Of course, we also knew that not every Christian was aware of the pagan roots of anti-Semitism, and that at least some were deluded into thinking it is an article of Christian faith invented by the Apostles (forgetting that they, too, were Jews). Continue reading here.