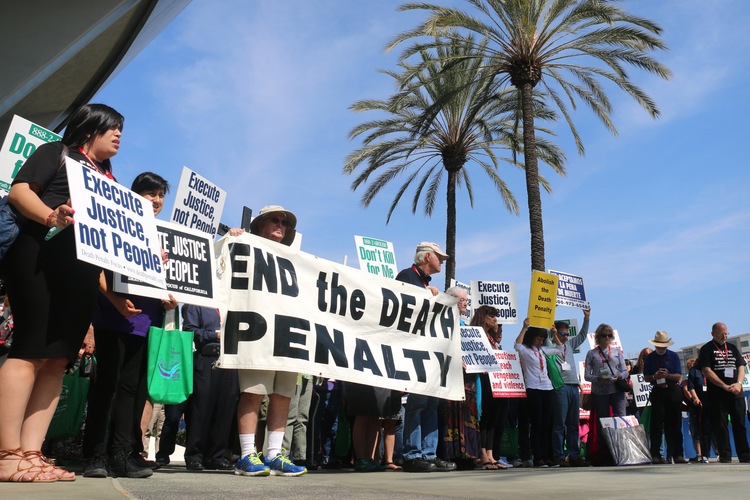 People gather in Anaheim, Calif., for a demonstration against the death penalty Feb. 27 as part of the Los Angeles Religious Education Congress (CNS photo/J.D. Long-Garcia, The Tidings).

The Eighth Amendment prohibits “cruel and unusual punishment.” In 1972, the U.S. Supreme Court put a moratorium on executions because legal inadequacies permitted arbitrary and capricious imposition of death sentences. States that wanted to reinstitute executions rewrote their laws, and in 1976 the court upheld capital punishment when rendered with enhanced procedural safeguards. Since then, however, the court has considered many death penalty laws and ruled on their constitutionality in the following areas:

Juries and Sentencing. The court’s first decision of the term that began in October 2016 considered impact statements in capital sentencing. The court ruled that family members may testify regarding the character of a crime victim and the loss suffered by the victim’s family, but may not give opinions regarding the appropriate sentence that should be imposed.

Last term the court reaffirmed that juries, rather than judges, must determine every fact necessary for the imposition of a death sentence. When that decision’s case was sent back to the Florida Supreme Court, the state court ruled that death sentences require a unanimous jury verdict. Alabama is now the only state that permits death sentences to be rendered without a unanimous jury determination—but that ruling likely will be overturned, as the U.S. Supreme Court just returned three death penalty cases to Alabama for reconsideration.

Racial Bias. In Foster v. Chatman (2016), the court vacated a death sentence rendered by a jury from which black jurors were systematically and notoriously excluded. This term the court will consider whether a defendant received ineffective assistance of counsel when his own attorney proffered racially biased testimony. The explicit bias in these cases is rare, but implicit racial discrimination throughout the criminal justice system is a serious constitutional concern.

Method of Execution. Since the death penalty was reinstated, all states with death penalty laws have adopted lethal injection as their primary method of execution. In 2008 the court upheld the constitutionality of a three-drug cocktail that renders the condemned unconscious and immobile before inducing a heart attack. In recent years, however, manufacturers of the most commonly used execution drugs have stopped selling their products for that purpose, which has forced states to create untried recipes. In Glossip v. Gross (2015), the court upheld the use of a substitute drug, midazolam, despite its seeming failure to impede pain in two lengthy executions.

Vagaries. Justice Stephen G. Breyer asserts that in the 40 years since the court reinstated the death penalty, states have been unable to apply it in a just and uniform manner, as required by the Eighth Amendment. The death penalty is meant to punish “the worst of the worst,” as Justice David Souter wrote in 2006, but it does not. Race, gender, the effectiveness of one’s lawyer and geography play a more important role in determining punishment than does the heinousness of the crime.

Even within states that regularly impose death sentences, the county in which a murder is committed, not the brutality of that murder, is a better indicator of punishment. Added procedural safeguards have resulted in fewer death sentences and fewer executions, but the process is still unreliable and unpredictable. The court recently denied review to a first-time violent offender convicted of a single murder who was sentenced to death because of woefully ineffective assistance of counsel. The attorney advised his client to plead guilty and then failed to submit evidence of obvious mitigating factors. According to Justice Breyer, “to receive that sentence...is the equivalent of being struck by lightning.” It is cruel and unusual and unconstitutional.

Ellen K. Boegel, who teaches legal studies at St. John’s University in New York, clerked for the U.S. Court of Appeals for the Second Circuit. She is a contributing editor for America.

Show Comments (
1
)
Comments are automatically closed two weeks after an article's initial publication. See our comments policy for more.
Henry George
4 years 4 months ago
When we look at the Death Penalty should we not also look at sentences that send a person to Prison for Life ? After all, if we can make legal/judicial mistakes in terms of the Death Penalty, can we, do we not make them for those we give a Life Sentence to ? If your Court Appointed Attorney easily tells you to plead guilty to a capital crime and then fails to provide adequate defense - what do you think they do for people facing 20 to 40 years in Prison for lesser crimes ? We need to admit our whole Justice System is broken and corrupt. Depending on the Judge/Prosecutor/Jurors/Country you are tried in - you could receive the Death Penalty or 25 years to Life. Are we not admitting institutional racism if we demand that your jury be composed of jurors of your racial background ? What about your educational background, your political background, your social/economic background your moral background... We should not simply dismiss the referendums that reaffirmed the Death Penalty by saying: Well it is Cruel and Unusual and so it must end. Yes, it should end, but understand why it is still supported and what it means to have a love one murdered by someone who will not pay the natural penalty that even Kant said was justly due.