Will the law back up cities and churches that offer sanctuary to the undocumented? 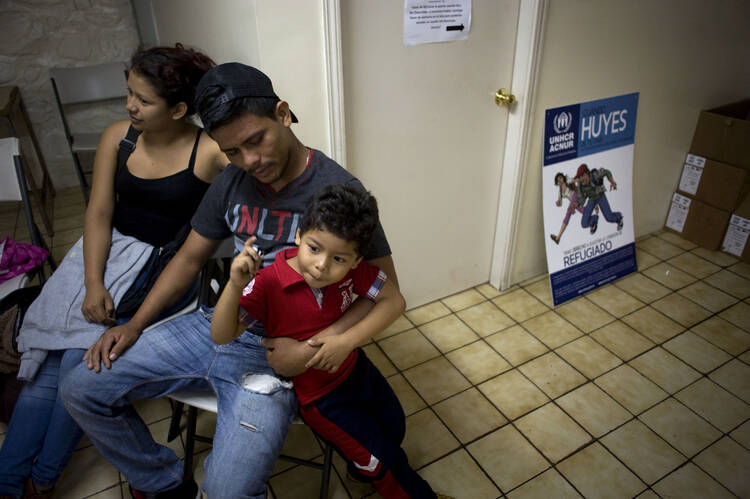 A family from the Mexican state of Guerrero at the Casa del Migrante shelter in Tijuana, Mexico in Jun 2016. (CNS photo/David Maung)

Kathryn Steinle was murdered in 2015 by an undocumented immigrant felon who, pursuant to San Francisco’s sanctuary policy, had been released from custody despite a detainer request issued by Immigration and Customs Enforcement. On Jan. 6, 2017, a federal district court in California dismissed a lawsuit brought by Ms. Steinle’s parents against San Francisco and I.C.E., which had missed other opportunities to deport the felon. Numerous factors other than San Francisco’s sanctuary policy led to Ms. Steinle’s death, but its role in this tragedy has fueled calls for political retribution, including Congressional defunding of sanctuary cities.

Immigration and naturalization (the process of becoming a citizen) is completely within the domain of the federal government, but state and local governments can aid or hinder enforcement of federal laws and enact policies that encourage or deter unauthorized immigrants from settling in a locality. The modern sanctuary movement began in the 1980s as a response to civil wars in Central America, particularly El Salvador and Guatemala, that led religious leaders to assist immigrants fleeing violence and economic disaster. These migrants were denied refugee and asylee status by the administration of President Ronald W. Reagan but were protected in the United States by private groups and some local governments. Several religious activists were convicted of harboring unauthorized aliens, but no action was taken against localities that refused to cooperate with federal immigration enforcement.

The number of localities with sanctuary policies has grown in recent years. I.C.E. reports that more than 500 counties have refused detainer requests to incarcerate individuals and 165 counties have anti-cooperation policies. The growth of sanctuary cities is partly a pro-immigrant response to increased deportations of nonviolent immigrants during the Obama administration. It is also partly a fiscally conservative response to civil liability imposed on localities that had unconstitutionally imprisoned individuals pursuant to improvidently issued I.C.E. detainers. In some instances, U.S. citizens were held in jail because I.C.E. incorrectly identified them as aliens.

Some of the controversy concerning sanctuary policies results from misunderstanding. The term “sanctuary city” and the more inclusive “sanctuary jurisdiction” are not clearly defined. Broadly, they refer to any locality, including a state, that welcomes unauthorized immigrants and promotes their involvement with the community. Sanctuary policies have been defined as including everything from issuing driver’s licenses and providing in-state college tuition to undocumented residents to encouraging immigrants to report crimes and employment law violations.

A more technical understanding limits the sanctuary definition to those policies that directly relate to immigration enforcement. These include limiting information-sharing with federal authorities, refusing to cooperate in the arrest of immigration violators, prohibiting inquiries into an individual’s immigration status, declining to honor federal detainers, shielding unlawfully present juveniles from federal detection and modifying sentences to avoid triggering deportation orders.

The 10th Amendment, which reserves all non-delegated powers to the states and the people, prohibits the federal government from commandeering state authorities. Thus, Congress cannot force localities to assist in the arrest of immigration violators, honor federal detainer requests or avoid criminal convictions that would trigger deportation proceedings. Anti-harboring laws, however, may prohibit local officials (and others) from actively shielding unauthorized aliens, including juveniles, from federal detection.

Current federal law also prohibits local governments from restricting the sharing of information “regarding the immigration status, lawful or unlawful, of an alien in the United States” with federal officials. The law does not, however, specifically require the gathering or sharing of that information, and it is uncertain whether such requirements would violate the 10th Amendment. Some sanctuary jurisdictions have ordinances or policies that seem to violate this federal law, but savings clauses that specify “except as otherwise provided under applicable federal law, no agent or agency shall disclose information” may preserve their legality.

The newly opened 115th Congress is considering a bill that would give teeth to the current law—not by requiring the sharing of information but by denying federal funding to local governments that prohibit the sharing of information. The proposed Mobilizing Against Sanctuary Cities Act, introduced by Rep. Lou Barletta of Pennsylvania, is more draconian than other enforcement efforts because it would cut off all federal funding, not just funding granted through specified criminal justice programs.

Congress may use the power of the purse to persuade localities to help with enforcement by providing funds to governments that actively cooperate with federal officials. Congress even may withhold some otherwise available funds to localities that refuse to participate in federal enforcement, but financial punishment that goes beyond persuasion to compulsion and is tantamount to “a gun to the head” has been held by the Supreme Court to be an unconstitutional exercise of the Spending Clause. Thus, the Mobilizing Against Sanctuary Cities Act is unlikely to pass and, if passed, may not be enforceable.

Controversies between localities and the federal government may become more frequent as a new administration and Congress increase immigration enforcement efforts. Federal officials will determine whether resources will be aimed primarily at dangerous criminals, like the murderer of Kathryn Steinle, or sweep broadly to target even those who fled violence in their homelands or were brought to the U.S. as children.

Local politicians will determine the extent to which their communities will participate in federal enforcement efforts or uphold sanctuary policies. When conflicts arise, the courts will be called upon to decide which government actions are constitutional. Many past immigration enforcement controversies, however, have been deemed non-justiciable political issues that cannot be resolved through litigation. In those circumstances, the voice and vote of the people will decide immigration policy.

Show Comments (
4
)
Comments are automatically closed two weeks after an article's initial publication. See our comments policy for more.
ed gleason
5 years 7 months ago
This story should also carry the facts that the immigrant stole the gun from a Federal agents car and Kathlyn was hit by a ricochet bullet by the man firing at seals in the bay. This was an urban tragedy by bizarre behaviour. Ed in San Francisco where church sanctuary was given to Salvadorans in the 80s and 90s and will do so again. .
Ellen Boegel
5 years 6 months ago

The only legal claim remaining is a negligence action against the U.S. Bureau of Land Management as the employer of the ranger who left the loaded government-issued gun in a backpack in a car parked in downtown San Francisco. To win this case, the Steinle's lawyer will have to convince a jury that the ranger's failure to adequately secure the gun caused Steinle's death because "the risk of a thief stealing the handgun and shooting someone, whether intentionally or negligently, was reasonably foreseeable."

It is time we face the facts about what is fair and responsible and stop the never-ending polarization of viewpoints. Santuary city officials are breaking the law they are required to uphold. If 'we the people' don't like a law, there is a process to change it. When some people don't like a broken Washington, the answer is not 'sanctuary cities'. This only makes the problem worse. Trump may not be perfect, but many of his policies are a step in the right direction as many of them will be modified from his rhetoric. On the other hand, Obama did nothing to resolve our immigration mess.

The word "alyee" appears in the second paragraph, is that a mispelling
of "alien" ?

The law is the law.
If there is a Federal Warrant out for me and I am arrested by the
County Sheriff for dangerous driving - should he just ignore the
Federal Warrant ?

Undocumented Aliens have broken the Federal Law.
You may think they deserve to stay in the United States.
But the Federal Laws says no, they are to be deported.
We cannot choose the Laws we will follow and not follow
and hope to have a stable society.

Either get the Congressmen you wish into Congress or
the President you support but don't act if you have a right
to ignore the law or if you do - dig into your own pocket, not mine
to fund the policies you support that enable law breakers to
avoid the law.

Nonetheless, it would be more just and charitable to allow those
immigrants - legal or il-legal amnesty one last time.