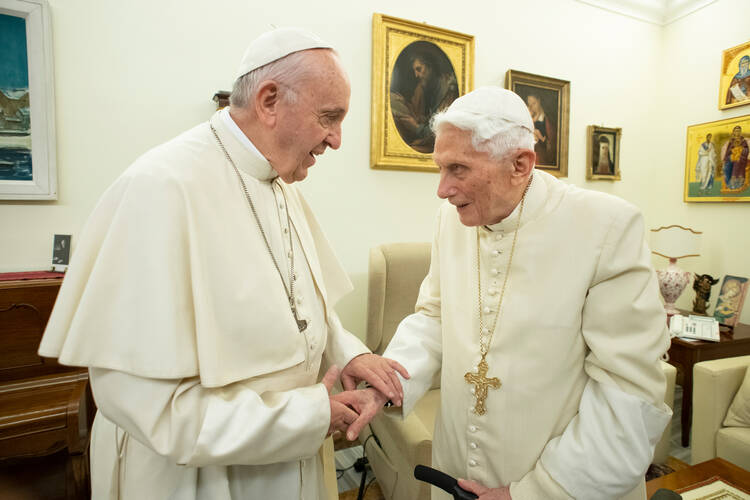 Update: On Jan. 14, America confirmed that Pope Emeritus Benedict XVI did not co-author the book Des profondeurs de nos coeurs (From the Depths of Our Hearts) with Cardinal Robert Sarah and has asked the Guinean cardinal to have his name removed as co-author. Read the full report here.

In a move that has stunned many in Rome and is sure to give rise to serious questions far beyond the theme of the book, the emeritus pope Benedict XVI, who will be 93 in April, and Cardinal Robert Sarah, prefect of the Congregation for Divine Worship and the Discipline of the Sacraments, have coauthored a book defending celibacy for priests of the Latin Rite church and expressing their total opposition to the ordination of married men, which was one of the recommendations approved by last October’s Synod for the Pan-Amazonian region. They perceive this opening to the ordination of married men as a great danger to the church.

The authors present themselves “as bishops” in “filial obedience to Pope Francis” who “seek the truth” in “a spirit of love of the unity of the church,” far from “the ideologies that divide” and far from “political maneuvers or power games or ideological manipulations.”

They said it is not possible “to keep quiet” after “the strange synod of the media.”

They call on the church “not to be impressed” by “the bad advocacies, the diabolical lies, the erroneous ways by which they wished to devalue priestly celibacy” in the media reporting of that synod. The authors claim that “in past months” they came to see that “the strange mediatic synod had prevailed over the real synod,” and this gave rise to their decision to write this text together. “We exchanged ideas and concerns. We prayed and we meditated in silence. Each of our meetings consoled us and calmed us mutually,” they said.

They call on the church “not to be impressed” by “the bad advocacies, the diabolical lies, the erroneous ways by which they wished to devalue priestly celibacy.”

The 175-page book, written in French, is entitled Des profoundeurs de nos couers (From the depths of our hearts) and will be published in France on Jan. 15. Le Figaro, France's oldest and second most-read daily, broke the news on Jan. 13 and presented some brief excerpts from the book together with background articles by its Vatican expert, Jean Marie Guenois, who sent an announcement of the work to more than 40 journalists from different countries.

News of the book’s imminent publication has taken the Vatican by surprise, and it is not yet known whether the authors had informed Pope Francis in advance of their project. One Vatican source (who asked for anonymity) told America he was very surprised because he knows that Benedict XVI is no longer physically able to write.

Another source (who also asked not be identified) said that he had visited the emeritus pope in recent months and noted that while Benedict’s mind is clear it is nonetheless difficult for him to engage in a conversation that lasts longer than 15 minutes. These sources wondered how this book came to be written.

Benedict XVI, who as pope often underlined “the great significance of priestly celibacy” while at the same time opening the door to the entry of hundreds of married Anglican priests into the Roman Catholic Church, writes in the book that “celibacy is indispensable so that our journey to God continues being the basis of our life.”

The book offers a “structured advocacy” justifying priestly celibacy, Mr. Guenois said, and it also sends “a message of support” to priests whom the authors say find their “consecrated celibacy” being ever more called into question. The authors dedicate the book “in homage to the priests of the entire world.”

The book comes on the eve of the publication of Pope Francis’ exhortation following the Amazonian synod, which is expected to be released by mid-February. It is already being perceived as a way of putting pressure on Pope Francis not to open the door, even in a very limited way, to the ordination of mature married men to the priesthood for communities in isolated areas (such as in parts of Amazonia) who are without the Eucharist.

News of the book’s imminent publication has taken the Vatican by surprise, and it is not yet known whether the authors had informed Pope Francis in advance of their project.

Pope Francis stated categorically in January 2019, in an airborne press conference, that he believes celibacy is “a gift for the church” and that he will not introduce optional celibacy. He said that he only saw the possibility of ordination of married men as an extreme measure to provide the Eucharist to people in remote areas who would otherwise remain without it for long periods.

It is particularly striking that this new book is coauthored by Benedict XVI. When he resigned from the papacy almost seven years ago in February 2013, he publicly committed himself to remaining totally silent from then onwards but has not done so.

Even before the book was published, Vatican officials and cardinals told America that Benedict’s interventions, especially on important issues, raises serious questions regarding the role of an emeritus pope; they expressed concern that such interventions risk undermining the present pope.

Cardinal Sarah, who has distanced himself from Pope Francis on a number of issues, participated fully in the synod and in an address to the synod fathers expressed his firm opposition to any opening to the ordination of married men, as he does in this book.

In Le Figaro, Mr. Guenois wrote that Cardinal Sarah and Benedict XVI share “a great spiritual friendship.” He said that the cardinal frequently visits the emeritus pope and that they began exchanging views in a fuller way at the beginning of 2019.

For some time, he said, Benedict was concerned about the crisis in the priesthood. After his participation during the synod, Cardinal Sarah shared his views on this and other questions with Benedict, and it seems encouraged the pope emeritus to write this book with him.

Benedict addresses the issue head-on in his chapter in the brief book, which is composed of a joint introduction and conclusion penned by Benedict and Sarah, and then a chapter apiece in between. Benedict’s chapter is dense with biblical references and he explains in scholarly terms what he says is the “necessary” foundation for the celibate priesthood that dates from the times of the apostles.

“The priesthood of Jesus Christ causes us to enter into a life that consists of becoming one with him and renouncing all that belongs only to us,” he writes. “For priests, this is the foundation of the necessity of celibacy but also of liturgical prayer, meditation on the Word of God and the renunciation of material goods.”

Marriage, he writes, requires man to give himself totally to his family. “Since serving the Lord likewise requires the total gift of a man, it does not seem possible to carry on the two vocations simultaneously. Thus, the ability to renounce marriage so as to place oneself totally at the Lord’s disposition became a criterion for priestly ministry.”

The joint conclusion of the book makes the case even stronger, acknowledging the crisis of the Catholic priesthood that it says has been “wounded by the revelation of so many scandals, disconcerted by the constant questioning of their consecrated celibacy.”