The papal hand slap divides Catholics and the media 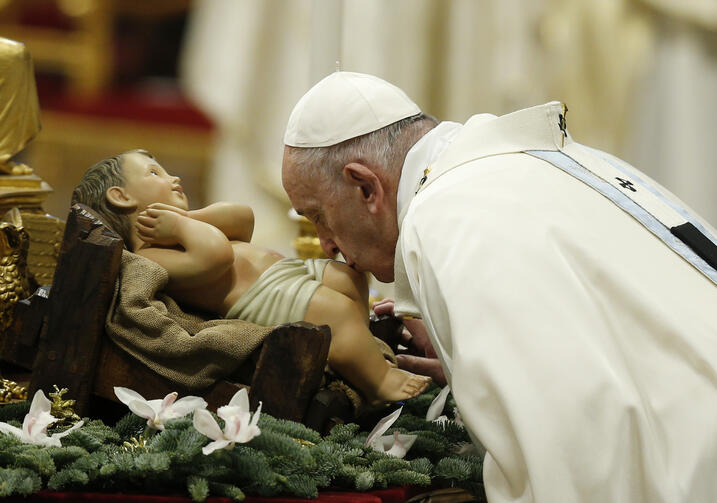 Pope Francis kisses a figurine of the baby Jesus at the start of Mass on the feast of Mary, Mother of God, in St. Peter's Basilica at the Vatican Jan. 1, 2020. (CNS photo/Paul Haring)

It was the hand swat seen ’round the world, drawing responses from folks on social media both defending and deploring Pope Francis’ reaction to an unexpected jerk on his arm on New Year’s Eve. After cheerfully greeting a long line of well-wishers on his way to the Nativity scene in St. Peter’s Square, the pope had been suddenly grabbed by an overeager pilgrim, who yanked him closer to her as he appeared to step away. The pope, after attempting to pull himself free, slapped at her hand before Vatican security could intervene.

Here is how the Vatican’s official news service described the incident: “As he greeted the faithful, a woman tugged his arm, causing a shooting pain to which the Pope reacted with an impatient gesture to free himself from her grip.”

Pope Francis went off script the next day during the midday Angelus prayer to acknowledge the incident. “Love makes us patient,” he said, adding, after briefly choking up, “We often lose our patience; me, too, and I apologize for my bad example last night.”

Perhaps predictably, Catholics who have come to view Pope Francis as a threat to the clarity of church teaching could only see the worst in the pope’s angry reaction to the grasping pilgrim.

But the encounter in St. Peter’s Square had by then provoked scores of headlines and tweets by secular and Catholic media alike. Some initial and disorienting headlines went no further than variations of “Pope slaps woman,” suggesting a level of violence absent from the actual encounter. The incident was even mockingly recreated on Instagram by Matteo Salvini, Italy’s former interior minister and leader of Italy’s radical-right Northern League—no fan of Pope Francis because of the pope’s frequent defense of the rights and dignity of refugees and migrants.

Perhaps predictably, Catholics who have come to view Pope Francis as a threat to the clarity of church teaching could only see the worst in the pope’s angry reaction to the grasping pilgrim. Some delighted in noting that the pope’s “mask” of conviviality and kindness had fallen away during the unexpected encounter.

Others speculated wildly on the meaning of the incident, suggesting without any evidence that the pilgrim, who appeared to be Asian, had come from China to complain directly to the pope about recent Vatican efforts at rapprochement with Beijing and attempts to integrate the so-called underground and government-recognized churches. Some insisted that Pope Francis had denounced her as “bruja” or used an even worse Spanish pejorative as he pulled his arm from her grasp and slapped at her hand. But the language used by the pilgrim and the pope’s angry remark as he escaped her grip are impossible to discern even after repeated viewing of the widely distributed video of the incident.

Other Catholics joined the social media battlements to argue that the pope’s defensive reaction was instinctive and completely reasonable, noting that the 83-year-old pontiff, who has a history of sciatica, was clearly reacting in pain to the hand grab and could have easily been facing a greater threat than an impulsive pilgrim. (On that point, many wondered at the apparent inattentiveness of Vatican security.)

Two days later what the unhappy encounter had to say about the “real” Pope Francis—revealed finally as a sour hypocrite or merely an actual human being who can be startled into anger—remained hotly disputed on social media.

“Disgruntled Pope Francis pulls himself free from woman’s grasp” was the Reuters headline, that “disgruntled” cited by some readers as an odd way to describe the reaction of an elderly man clearly surprised and pulled off balance.

“Disgruntled? Look at the video. He was in pain! He was very obviously in pain!” one Twitter member pointed out, and the frequent CNN commentator Father Edward Beck responded: “I GUESS EVEN @Pontifex HAS HIS LIMITS. HE ALSO MAY HAVE A SORE ARM…”

The theme of the pope’s homily on the feast of Mary, Mother of God, just a few hours after the incident, focused on peacemaking and a call for the end of violence against women. During his first Mass of 2020, Pope Francis said: “Every violence inflicted on a woman is a profanation of God, who was born of a woman. Humanity’s salvation was accomplished through the body of a woman; how we treat a woman’s body is an indication of our level of humanity.”

A few media professionals found the apparent irony irresistible. “Pope Francis has used his New Year message to denounce violence against women, hours after slapping a woman’s hand to free himself from her grip,” noted CNN’s official Twitter account. A similar tweet from EWTN’s Raymond Arroyo invited an avalanche of criticism for both Pope Francis, deplored as a hypocrite and worse, and Mr. Arroyo, whose intentions were challenged by other commentators. Mr. Arroyo defended his tweets as mere reporting of the night’s events, but many Twitterati (it should be noted, this correspondent among them) deplored connections to the pope’s words on violence against women as a distortion of the incident and a case of false equivalence.

Hours after the incident, more sober headlines attempted greater clarity. CBS news ran an AFP wire report with the headline: “Pope Francis apologizes for swatting hand of woman tugging his arm”; and at The New York Times: “Pope Francis Apologizes After Slapping Away a Clinging Pilgrim.” The Associated Press ran the story under “Pope: Sorry I lost patience with hand-shaker who yanked me.”

Two days later what the unhappy encounter had to say about the “real” Pope Francis—revealed finally as a sour hypocrite or merely an actual human being who can be startled into anger—remained hotly disputed on social media. It would appear that in ending a volatile and fractious 2019, the world’s Catholics have not made a great beginning in 2020, carrying on a hermeneutic of antagonism that has often poisoned dialogue over the era’s significant ecclesial, social and political challenges.

In his Angelus remarks on Jan. 1, Pope Francis urged Christians to step down from “pedestals of our pride...so that the coming year will be a journey of hope and peace, not with words, but with everyday gestures of dialogue, reconciliation and the care of creation.” Despite his slip up on the last night of 2019, that is perhaps a call to our better natures worth keeping in mind this month as we try to make a good start to the new year.