Pope Francis’ Visit Could Be a Game-Changer in the Philippines 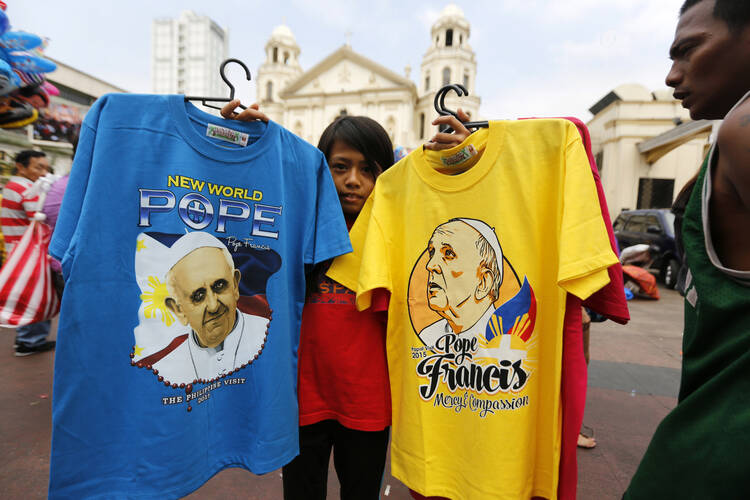 As Pope Francis prepared to journey to the Philippines (Jan. 15-19), the third most populous Catholic country in the world after Brazil and Mexico, I interviewed a well-known Filipino peace advocate, Ed Garcia, about the significance of the papal visit and the situation in the country today at both church and state levels.

The Jesuit-trained Garcia was active in the movement to bring down President Ferdinand Marcos, was a founder of the non-violent organization, Lakasdiwa, and a member of the commission that drafted the 1987 Philippine Constitution. He is now one of the 14 surviving members of that 48-member commission.

A former professor of political science at the University of the Philippines and of Latin American studies at the Ateneo de Manila University, he is both a writer and the author of several books and today serves as a consultant on formation at the Far Eastern University. Married with four children, he spent some twenty years in conflict resolution around the world, and is now chair of the GZO Peace Institute and accompanies the efforts of citizens to end the 46-year-old conflict between the government and the Communist Party of the Philippines.

Pope Francis will visit the Philippines on Jan. 15, for four days. What’s the atmosphere like now ahead of that visit? How is he perceived by the people?

Since more than a month ago, there has been a papal countdown demonstrating the people’s enthusiasm for Pope Francis’ visit. In a recent survey conducted by Pew Research the pope received 88 percent approval rating, with 6 percent no opinion. In all forms of media there is much expectation for his visit and a four day holiday has been declared—a first in the country.

Francis is the third pope to come to the Philippines after Paul VI in 1970 and John Paul II in 1981 and 1995. What’s different about his visit?

Filipinos are fervent Christians and there has always been enthusiasm for a papal visit. Pope Francis is a globally-admired and well-loved figure and the fact that he represents mercy and compassion has resonated well with church leaders and faithful alike. Jesuits are highly regarded in the country, and the fact that he is the first Jesuit pope is another highly-positive factor.

What has changed in the country, and in church-state relations, since John Paul II last came here for World Youth Day in 1995?

There is greater independence of state from church today; in Cardinal Sin’s time the church played an important role in the political changes in the country. Now, there is greater focus on the faith.

What do you see as the major problems in the country, and in the church, today?

The politics and economics of exclusion prevail leading to greater inequality and poverty; the politics of patronage and personalities has led to corrupt practices. Not enough church leaders have demonstrated inspired and selfess leadership—this failure in leadership is one key issue the papal visit can help address.

What are the particular strengths of the country and of the church today?

We are a resilient people, and to paraphrase the late Jesuit historian Fr. H. de la Costa, we are a pauper with three jewels: our faith, our music and laughter. And I add a fourth: our youth.

A peace accord has been reached in the predominantly Muslim island of Mindanao, between some of the armed groups and the government which had been in conflict for many years. Could you summarize what has been achieved here, and how stable is this peace?

You are one of those peace-activists who hope that Francis may be able to give a boost to the stalled negotiations aimed at ending the 46 year conflict between the Communist party and the government. Could you explain briefly the background to this conflict, and what areas are most affected by it?

The protracted armed conflict with the Communists is perhaps the world’s longest ideological insurgency that has eluded solution. If you recall the late Senator Pepe Diokno had proposed a formula: jobs and justice, food and freedom, land and liberation. The politics of exclusion and economic inequality, particularly involving land, lies at the roots of this conflict. The peace negotiations have been stalled for some two years now. The principal reasons for the conflict are violations of basic rights from both sides, disagreement on release of political prisoners some of whom the Communists claim fall under the Joint Agreement on Security and Immunity Guarantees (the Jasig Agreement) and the lack of political will on both sides particularly on the question of stilling the guns.

The peace negotiations to then that 46-year-old conflict failed. How could Pope Francis help to restart them? Could he even help to end the conflict?

My belief is that Pope Francis’ visit could be the ultimate game changer. For over two decades negotiations have failed to attain an elusive peace. The pope’s grace of office has deftly influenced the rapproachment between the U.S. and Cuba. Here in the Philippines, both sides have declared limited ceasefire in deference to the pope’s visit. If he insists in his messages of peace throughout the land in the main Christian nation in Asia it could lead to a renewed resolve. He could also ask for a symbolic gesture such as the release of key political prisoners such as Alan Jazmines, a former student of the Jesuits and a possible force for good in the negotiations. By the way, the chief negotiator of the National Democratic Front (NDF) is Louie Jalandoni, a former priest, and there is a also a former nun, Connie Ledesma, in the NDF negotiating panel. The pope could speak out on three issues: protect the human rights rights of all, particularly, indigenous peoples, socio-economic reforms and political/electoral reforms—which could all lead to a reduction of violence on the ground and a permanent cessation of hostilities. He could also designate a special envoy for peace to assist the offical facilitators of the peace negotiations, the Royal Norwegian Government or Norwegians. The envoy could consult with the Presidential Adviser on Peace Processes, Secretary Ging Deles, and the leader of the Communists now based in Utrecth, the Netherlands, Jose Ma Sison, a former student of the Jesuits for a brief period until he had to leave the Jesuit school. By insisting on peace in the main Christian nation in Asia during his private talk with President Noynoy Aquino, he can indeed be the game changer. We are prepared to be surprised.

You were one of those actively involved in bringing down President Marcos, and I remember you had high hopes then for reforming this country. But today we still see a big gap between the (small number of) rich and the many poor people, many have been forced to emigrate, and corruption has been rampant. How do you explain this? Why did the hoped for reform fail?

We fought for a new way of doing politics; the tragedy is that the old way of doing politics has largely been entrenched though there are good people in government like Butch Abad, Dinky Soliman, Ging Deles who all came from the parliament of the streets. However, there can be no authentic political democracy unless there is economic democracy as well. Besides, democracy does not automatically come after a change of political leadership. It requires vigilance and the sustained engagement of people on the ground, what I call, the marathon mentality.

How can you have such a gap between rich and poor in a country where the church has been such a dominant force? What do you hope Pope Francis will say or do when he comes?

I am confident that he will demonstrate leadership by example, that of the servant leader; thus the pope’s visit could dramatically alter the equation and demonstrate the preferential option for the poor in action.

What is the significance of the pope’s visit to Tacloban, in the Visayas, to meet the victims and survivors of Typhoon Haiyan?

We are a country devastated by natural disasters and visited by at least 20 typhoons a year. In fact a typhoon just hit the Visayas. His visit to Tacloban is important, but Tacloban should be a symbol of all those who have experienced natural disasters magnified by man-made disasters as well.

How important is Pope Francis’ meeting with the youth?

Youth is the hope of the Fatherland, Jose Rizal, the country’s national hero, once said. Youth is a double edged sword in the country: a scourge or a resource for peace.

How important is Francis’ meeting with the religious leaders?

Pope Francis’ meeting with religious leaders, I believe, could help highlight his consistent challenge of becoming the church of the poor, the harbingers of mercy and compassion. It will help define the quality of servant leadership felt and lived deep down day in and day out; of leaders able to pitch their tent amidst the people, while embodying their aspirations. I have always believed that the first task of a leader is to keep hope alive. Pope Francis keeps our hopes alive. Moreover, he comes at the right time and place. It is the opportune moment, the Kairos!