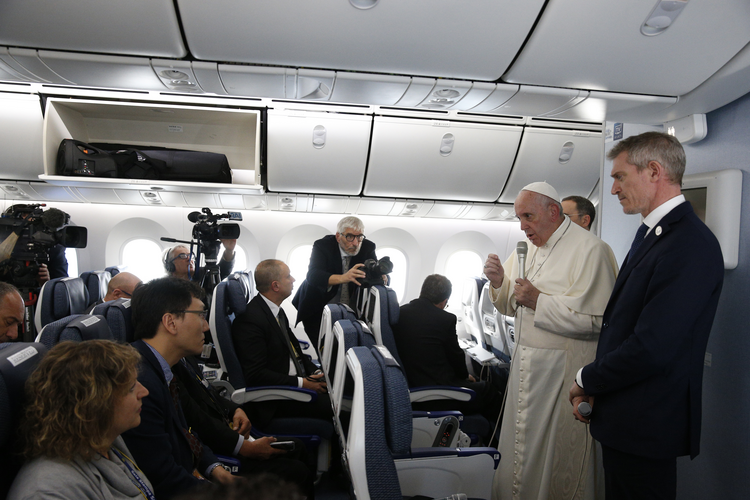 Pope Francis answers questions from reporters aboard his flight from Tokyo to Rome on Nov. 26, 2019. (CNS photo/Paul Haring)

On the flight home from Tokyo, Pope Francis came to the back of the plane for his traditional meeting with the press just one hour after take-off, clearly energized by his successful visit to Thailand and Japan and the warm reception he received in both countries.

Responding to a question from a Japanese reporter, Pope Francis restated his conviction that “the use of nuclear arms” and “the possession” of such weapons “is immoral.” He said the Catechism of the Catholic Church will be amended to include this teaching.

He added that he was moved by his visits to Hiroshima and Nagasaki, where atomic weapons were used by the United States at the end of World War II. He described what he learned about the suffering experienced at Hiroshima as “a true human catechesis on cruelty.”

At Hiroshima, he said, “I repeated that the use of nuclear arms is immoral…. Not just the use, but also the possession because an accident of possession or of the folly of some leader...could destroy humanity.

“Let’s think of what Einstein said: ‘The fourth world war will be fought with sticks and stones.’”

“There is no assurance [nuclear energy production] will not cause a disaster,” Pope Francis said, noting the twin disasters of Fukushima and the 1986 disaster at Chernobyl in Ukraine.

Responding to another question about the continued use of nuclear energy in Japan despite the ongoing crisis at the Fukushima Daiichi nuclear facility, which had been irreparably damaged by the 2011 earthquake and tsunami, Pope Francis said it was his personal opinion that nuclear power should not be used “until it is totally safe.”

He noted that many experts believe that “the custody of creation” cannot be fully protected against a nuclear energy accident, “and so it should be stopped.”

“There is no assurance [nuclear energy production] will not cause a disaster,” he said, noting the twin disasters of Fukushima and the 1986 disaster at Chernobyl in Ukraine.

He added that humankind has “gone beyond limits on the environment” in such areas as agriculture and food production, suggesting that he believed that path cannot be continued without “limit,” including on the use of nuclear power. He said there are already “so many rare diseases today due to the misuse of the environment.”

Pope Francis also faced questions regarding Vatican finances arising from recent events that have provoked concern about the possibility of mismanagement of the Peter’s Pence charity. Other concerns include possibly illicit real estate investments and the resignation of most of the members of the board of the Vatican’s Financial Authority, known by its Italian abbreviation A.I.F., which is meant to safeguard against improper financial dealings.

Pope Francis also faced questions regarding Vatican finances arising from recent events that have provoked concern about the possibility of mismanagement of the Peter’s Pence charity.

Pope Francis said no one should be bothered by the fact that the Vatican invests the money it collects from Catholics around the world: “The sum of Peter’s Pence arrives and what do I do? Put it in a drawer? No, that’s bad administration. I try to make an investment.” Peter’s Pence is a papal fund used for charity but also to support the running of the Roman Curia and Vatican embassies around the world. The collection for the fund occurs each year around June 29, the feast of Sts. Peter and Paul.

When handling Vatican funds, the pope said, it is best to follow what some people describe as a “widow's investment,” which is putting money into a variety of investments so that if one fails, the entire amount is not lost. Of course, he said, all of the investments must be moral. “If you make an investment with Peter’s Pence in a weapons factory, the offering is no longer an offering,” he said.

He emphasized that “the denunciation” regarding questionable investments “did not come from outside the Vatican, it came from the inside, thanks to the reform Benedict XVI had started.”

He revealed that the Vatican auditor had concluded that “something was wrong,” so “he visited me, and I asked him, ‘Are you sure about it?’ And I said, ‘There is the Vatican judicial system. File a report with the prosecutor.’ And he did.”

Pope Francis emphasized that “the situation is still not clear regarding the property in London,” referring to a $200 million real estate deal that has raised eyebrows and questions about Vatican stewardship.

Pope Francis said, “It’s the first time an issue like this has been brought to light from the inside in the Vatican. It’s happened a lot of times from the outside.” He added, “I was happy about this because it means that the Vatican’s own administration now has the resources to clarify the bad things that happen inside, like in this case.”

He emphasized, however, that “the situation is still not clear regarding the property in London,” referring to a $200 million real estate deal that has raised eyebrows and questions about Vatican stewardship. He said, “The prosecutor realized that there were some irregularities in the budget, so he asked for my permission in order to make raids,” referring to document seizures at the offices of the Secretariat of State and the Financial Information Authority in October.

Pope Francis said he believes that “in less than one month there will be interrogations of the five people who have been suspended because of corruption charges.” He added, “The presumption of innocence is guaranteed. But if there is corruption, then you will see it.”

He said, “It is not good that these things happen inside the Vatican, but everything has been clarified by the internal mechanisms which are starting to work.”

A U.S. journalist, noting that the Egmont Group, private financial authorities, had suspended the Vatican from secure communications following the A.I.F. raids, asked the pope how he could offer assurances about the integrity of the Vatican’s finances and especially to the faithful who have been asked to contribute to Peter’s Pence.

Pope Francis said that “the Vatican has taken steps forward in terms of how it is managed. Today, for example, the Institute for the Works of Religion,” better known as the Vatican Bank, “is accepted by all banks and can act like a normal Italian bank. This, only a year ago, wasn’t the case. There has been progress.”

Pope Francis on Vatican finance scandals: “The presumption of innocence is guaranteed. But if there is corruption, then you will see it.”

He said, “The matter with the Egmont group was a bit disturbing,” but he added, “It’s a private group, which is extremely useful, but it is not the regulatory authority.” He told the reporters that the European Union monitor authority Moneyval has that role. He said Moneyval plans an inspection of Vatican finances in “the first months of next year.”

He explained that “the director of A.I.F. has been suspended because there were suspicions of mismanagement… in the sense that proper vigilance wasn’t carried out.” The pope said he has already found a replacement, “an extremely high-ranking magistrate both on a national and international level in juridical and economic terms, and upon my return, he will take over A.I.F.”

He said, “We need to push forward with the law, with Moneyval, with the new A.I.F. president.” He added he would “really like for the suspended director to turn out to be innocent.”

He credited Pope Benedict for starting a process of reforming the Vatican’s various financial institutions. “He was very wise. He started a process that matured and matured…. Now the auditor had the courage to file a written report against five people…. The auditor is functioning.”

A French journalist asked if he were writing an encyclical on violence, as some have said.

Pope Francis acknowledged he was considering a “project” for an encyclical on violence, “but the next pope will conclude it.”

“There are some projects that end up inside drawers,” he said, “but the one on violence is still in progress. When the time is right, I will do it.”

On last day in Thailand, Pope Francis tells missionaries to ‘give faith a Thai face and flesh’
Gerard O’Connell

He explained that the possible encyclical has grown out of the presence of violence in life, from schoolyard bullying, which he mentioned in Japan, all the way to the level of the United Nations’ Security Council’s repeated inability to intervene to prevent conflict between nations.

Pope Francis said, “I am not capable of judging this, but I heard an opinion that—maybe—the U.N. should take a step forward to renouncing the veto power inside its Security Council,” since many efforts to intervene have been stopped by one major power’s veto.

He wondered how European countries with Christian cultures can “speak about peace and yet grow [economically] thanks to the production of weapons.” He called this “hypocrisy,” a word from the Gospels, he said, and one warned against many times by Jesus in Matthew 23.

Francis said, “A country should have the courage to say, ‘I cannot speak about weapons because my economy grows a lot thanks to the production of weapons.’ Let’s stop [this production] out of human fraternity. Let’s stop it because it is a bad thing.”

The question of just war and legitimate defense, Pope Francis said, “is always there, it is a hypothesis recognized also by moral theology.”

“But it is [to be seen as] the last appeal,” he said. Resorting to weapons “are the last step. Legitimate defense [should be done] with diplomacy, with mediation.”

This report is based on an unofficial transcript prepared by a group of anglophone journalists.