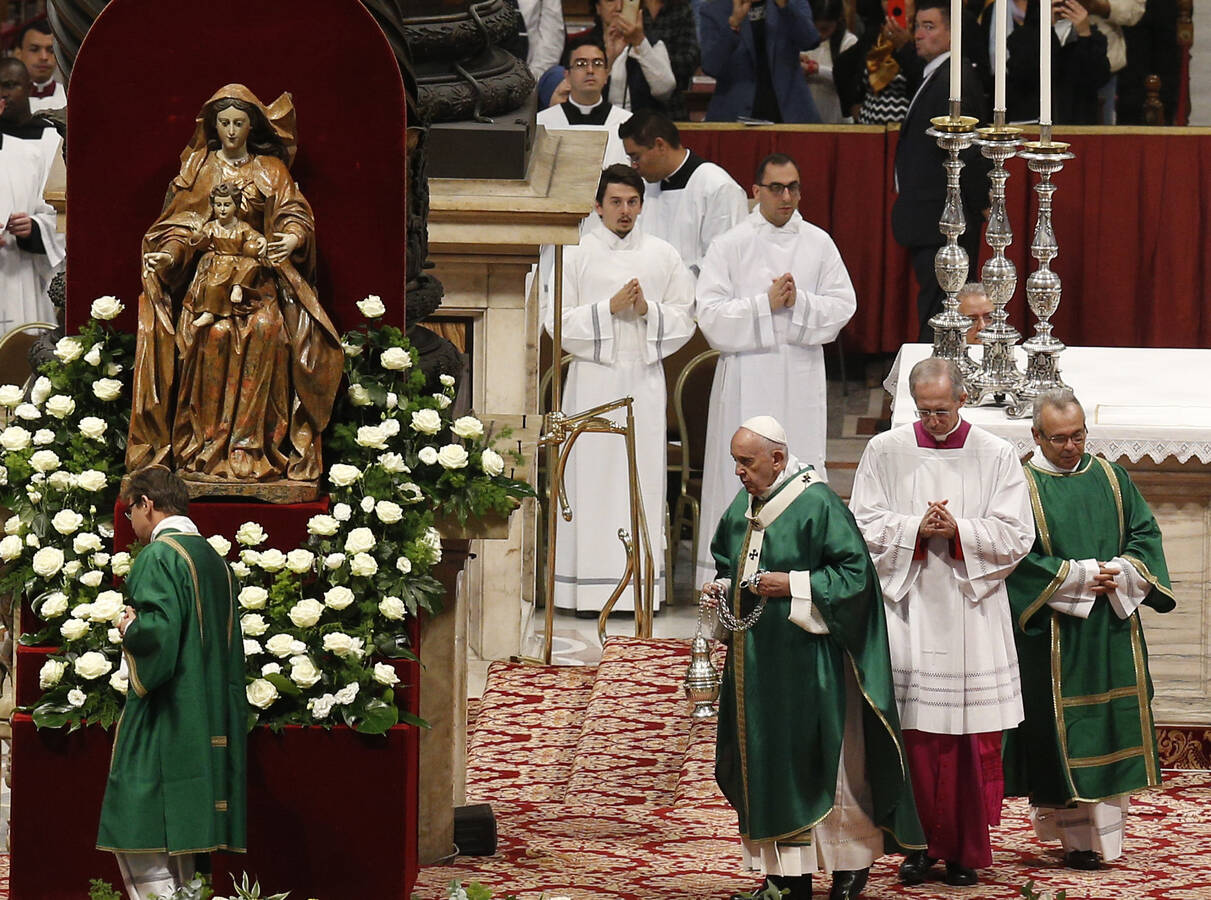 Synod participant: Women are already doing the work of deacons in the Amazon

As the Synod of Bishops on the Pan-Amazonian Region discussed the need to enhance the ministry of the permanent diaconate in the region, a married deacon who was appointed by Pope Francis as a synod auditor spoke to America about the global importance of the synod, the current state of ministry in the region and his favorable view toward the possibility of women being admitted to the permanent diaconate.

“The problems of the Amazon region on the level of ecclesiology and integral ecology are common problems for the whole world,” said Deacon Francisco Andrade de Lima, 45, of Tefé, Brazil, who serves as the executive secretary of North Region 1 of the National Conference of Brazilian Bishops.

Specifically referring to the effects of climate change and the lack of priests, the deacon said that as the synod responds to these problems in the Amazon, the effort can “become a global action” that is “implemented differently” in each region of the world.

Deacon Andrade de Lima, the son of farmers who grew up on the banks of the Amazon River in the Solimões region, said he is involved in the formation of pastoral workers in the region and assists the bishops in the implementation of their decisions.

The apostolic prelature in which he works, Tefé, was established in 1950, has nearly 200,000 Catholics, only 27 priests—a ratio of 7,133 Catholics per priest—and covers 102,231 square miles, which is about the size of Colorado. The prelature covers Amazonas, the largest state in Brazil, and Roraima, the northernmost and least populated state in Brazil.

In the interview with America on Oct. 24, Deacon Andrade de Lima, one of two permanent deacons who served as auditors at the three-week Amazon synod that concluded on Oct. 27 in Rome, described three major issues that emerged from the synod.

The first relates to ministries, he said, including the participation of women and lay men in ministry, how to respond to the needs of the people concerning the Eucharist, the ordination of married men and how to reach people in the vast Amazonian region.

The second is ecology and care for the earth, especially related to the experiences and concerns of the indigenous communities in the region. The synod is addressing “how the church can support initiatives that have been already taken by the indigenous populations,” he said.

The third relates to the political level.

“We have been asking what governments can do to implement legislation” that has been passed but not yet made real, he said, and also to “respect the convention of the United Nations concerning the problem of mining.” The synod is particularly concerned about the need to consult indigenous communities, he said.

The deacon said the most important message he wanted to convey to the synod is that communities in the Amazonian region “want the church to be present” and also “to make their voice present.”

In the synod, the Holy Spirit was most present in the “very beautiful process of listening to the representatives of the communities” in the region, he said, adding that what was heard “must be welcomed and implemented.”

A frequently discussed topic at the synod was the ministry of permanent deacons in the region. Deacon Andrade de Lima, who is married and has two daughters, explained that his prelature only started to ordain permanent deacons in 2010 and he was among the first four ordained.

“The church is often absent in the communities,” he said, but the ministry of deacons can increase the presence by simply being with people and “following the concrete life of the communities,” especially in offering one’s life in social services like that of Caritas, the Catholic relief and development organization.

The synod’s final document, which was approved and published on Oct. 26, says that “the promotion, formation and support of permanent deacons is urgent because of the importance of this ministry for the community” in the Amazon region. The diaconate today, according to synod text, needs to promote “integral ecology, human development, social pastoral work, service to those in situations of vulnerability and poverty, configuring it to Christ the Servant, becoming a merciful, Samaritan, compassionate and diaconal Church” (No. 104).

The formation program for permanent deacons, “adapted to each local reality,” needs to involve “academic study and pastoral practice, accompanied by a formation team and the parish community” and the deacon’s family (No. 105). The curriculum should cover dialogue (ecumenical, interreligious and intercultural), local church history, sexuality, integral ecology and other relevant topics (No. 106).

Each of the 120 paragraphs of the final document (available in Spanish only) were approved with the necessary two-thirds majority vote.

Deacon Andrade de Lima said that “women are taking on more and more ministries” in both rural and urban communities in his region, as leaders of Catholic communities, catechists, ministers of the Word, bringing holy Communion to people, and also as extraordinary ministers of baptism, a mandate received from the bishop.

The latter role is exercised especially by consecrated women, he explained.

The church needs to reflect on this possibility from a “vocational perspective,” he said “because there are several women, many women, who are called to this ministry but other women prefer to continue carrying out the same ministry” they are already doing.

“There should be a way of rethinking the hierarchical structure of the church,” he added.

The synod’s final document acknowledges that in “a large number” of the consultations carried out in the Amazon, “the permanent diaconate for women was requested,” adding that the theme was important during the synod. Then, referring to the Study Commission on the Diaconate of Women that Pope Francis had established in 2016, the synod expressed its desire “to share our experiences and reflections with the Commission and await its results” (No. 103).

In his remarks at the synod’s closing session, Pope Francis told the 265 synod participants that he would reconvene the papal commission on the diaconate of women, perhaps “with new members,” in order to continue studying “how the permanent diaconate worked in the early church.”

"There should be a way of rethinking the hierarchical structure of the church."

“I take up the challenge” for the synod “to be heard” on this topic, the pope said, as the synod hall responded with applause.

Bishop Robert McElroy of San Diego, a papal appointee to the Amazon synod, told America in an interview at the synod’s conclusion that the pope’s comments “certainly signaled” that the papal commission would have “a new perspective and new people” looking at the possibility of women deacons “to see is there a way that this can be accomplished.”

The bishop added, “It was clear to me that the majority of bishops at the synod were in favor of recommending women to be in the diaconate.”

More: Synod on the Amazon / Vatican / Women in the Church / Deacons

hansen@americamagazine.org
Show Comments ()
Join the conversation: Login or create an account
Before you can comment, you need to update your profile to include your first and last name, as required in our comments policy. Then reload this page and you'll be set up for commenting. Update your profile
Show Comments ()
Comments are automatically closed two weeks after an article's initial publication. See our comments policy for more.