Pope Francis: The church must listen to ‘the cry of the poor’ 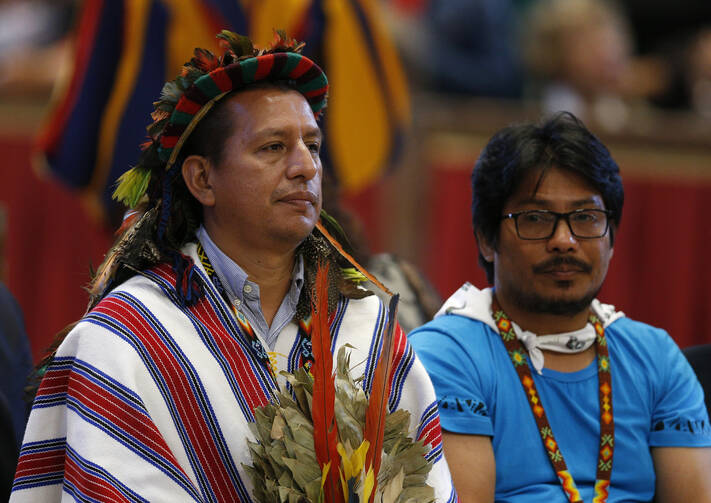 People attend the concluding Mass of the Synod of Bishops for the Amazon celebrated by Pope Francis at the Vatican Oct. 27, 2019. (CNS photo/Paul Haring)

The Special Assembly of the Synod of Bishops for the Pan-Amazonian Region concluded its work on Oct. 26 by approving all 120 paragraphs of its final document with the necessary two-thirds majority vote, including one proposing the priestly ordination of “suitable and esteemed” married men who are permanent deacons in communities of this vast region.

While that latter proposal attracted much of the media attention and had the most votes against it (41 against, 128 in favor), the most important thing to emerge from the synod was the unequivocal commitment by the church in the nine countries of the Amazon region to seek new ways to preach the Gospel and to promote justice and stand in solidarity with its 34 million inhabitants in defense of their rights and against all forms of violence and exploitation that they now suffer. Synod participants were especially attentive to the treatment of the region’s 2.5 million indigenous peoples in voluntary isolation, that is, living in communities that shun contact with the industrialized world.

At the same time, the synod committed the church in the region to work for the protection of the Amazonian rain forest, since deforestation threatens the entire ecosystem.

The synod is a consultative body and its proposals are considered as recommendations to the pope. He will decide how best to respond to them. Speaking at the end of the synod, Pope Francis gave instructions for the text and the votes to be published, and he announced his intention to issue an apostolic exhortation based on the synod’s conclusions before the end of the year.

He praised the media for its work of reporting the synod but appealed to journalists not to merely focus on “the disciplinary questions”—alluding to the ordination of married men—but to make known the other important issues that were central to the synod’s discussion. The 33-page final document calls for four conversions: pastoral, cultural, ecological and synodal.

The most important thing to emerge from the synod was the unequivocal commitment by the church to seek new ways to preach the Gospel and to promote justice and stand in solidarity with the Amazon’s 34 million inhabitants.

Presenting the text at a Vatican press briefing on Oct. 26, Cardinal Michael Czerny, S.J., said that without these four conversions there are “no new paths” and “no real change.”

“With the Amazon burning,” he said, “many more people are realizing that things have to change. We cannot keep repeating old responses to urgent problems and expect to get better results.”

Referring to the need for an ecological conversion at the personal and communal level, he said the ecological crisis is so deep that if we don’t change, “we’re not going to make it.”

Concerning the possibility of the priestly ordination of married men from church communities in Amazonia, the synod noted that many of these communities rarely have the Eucharist, the sacrament of reconciliation or the anointing of the sick—even going for a year or more without these sacraments because of the shortage of priests.

“We appreciate celibacy as a gift from God,” the synod affirmed, “to the extent that this gift enables the missionary disciple, ordained to the priesthood, to dedicate himself fully to the service of the Holy People of God.” Yet this discipline “is not required by the very nature of the priesthood,” the synod continued, quoting the Second Vatican Council’s decree on priesthood.

The synod then proposed “establishing criteria and dispositions on the part of the competent authority” to ordain as priests “suitable and esteemed men of the community, who have had a fruitful permanent diaconate” and “an adequate formation for the priesthood, having a legitimately constituted and stable family, to sustain the life of the Christian community through the preaching of the Word and the celebration of the sacraments in the most remote areas of the Amazon region.” The synod added that “in this regard, some [synod fathers] were in favor of a more universal approach to the subject.”

Pope Francis told the synod participants he accepts the request to reconvene the papal commission on the diaconate of women in order to continue studying “how the permanent diaconate worked in the early church.”

Another question that received great attention during the synod was what kind of “official ministry” could be conferred on women, in light of the decisive role they play in the Amazonian church.

The synod’s final document notes that in “a large number” of the consultations carried out in the Amazon, “the permanent diaconate for women was requested,” adding that the theme was important during the synod. Then, referring to a study commission on women deacons that Pope Francis established in 2016, which “arrived at a partial result based on what the reality of the diaconate of women was like in the early centuries of the Church and its implications for today,” the final document expresses the desire of the synod “to share our experiences and reflections with the Commission and await its results.”

In his closing remarks, Pope Francis told the synod participants he accepts the request to reconvene the papal commission on the diaconate of women, perhaps “with new members,” in order to continue studying “how the permanent diaconate worked in the early church.”

“I take up the challenge,” he said, leading to applause in the synod hall.

As the Amazon Synod nears the end, a Brazilian bishop makes the case for women deacons
Luke Hansen

In the final document’s reflections on new paths for a synodal conversion, the synod says it is “urgent” for the church in the Amazon “to promote and confer ministries for men and women in an equitable manner.”

There are many specific proposals in the final document that are destined to have a long-term impact on the church and peoples in the region. Among them is the significant proposal for the creation of “a liturgical rite for the indigenous peoples of the Amazon”—otherwise referred to as “an Amazonian rite”—in addition to the 23 different rites that already exist in the Catholic Church worldwide.

The three-week-long synod officially closed with a Mass in St. Peter’s Basilica on Oct. 27.

In an inspiring and challenging homily about the Gospel parable of the Pharisee and the tax collector, Pope Francis asked, “How many times, even in the church, have the voices of the poor not been heard and perhaps scoffed at or silenced because they are inconvenient?”

“In this synod,” he said, “we have had the grace of listening to the voices of the poor and of reflecting on the precariousness of their lives, threatened by predatory models of development. Yet precisely in this situation, many have testified to us that it is possible to look at reality in a different way, accepting it with open arms as a gift, treating the created world not as a resource to be exploited but as a home to be preserved, with trust in God.”

Luke Hansen, a former associate editor of America, is a Catholic writer and speaker.

The model of our Church is old and tired. Far too many churches today are empty because young and old Catholics alike are leaving the Church. Far too many feel disenfranchised. Our Church needs a new vision of inclusion because the old one is not working. Thank God, Pope Francis is charting a new course for our Church. He is changing our Church that has been dominated by Laws for centuries, to a Pastoral Church for the people dominated by mercy, forgiveness and inclusiveness. Witness the fact that the divorced and remarried without an annulment could never receive Holy Communion. Now this is possible through Amoris Laetitia. Going forward, I believe it is highly likely that Pope Francis will permit married men as priests and eventually woman deacons for the Amazon. While celibacy will be the preferred model for the priesthood, I believe it will eventually become voluntary, not only for the Amazon but for other regions of the world as well. Lastly, I hope that Catholics born gay or lesbian will be also given a realistic path to the Eucharist in the same way that the divorced and remarried have today. This may be possible as the Church becomes more synodal and bishops listen to the people, their needs and cries for change and compassion.

I am impressed by Pope Francis' genuine love for and identification with the poor. The cry of the poor IS the voice of God, and it can, of course, be challenging and threaten some of our ways of living... just as Jesus' parables did. How we treat those who are vulnerable reveals our character... they are the questioning presence of God among us.

With regard to the ordination of women, why should we be restricted to what happened in the early church? The early church was patriarchal. The church is still patriarchal. But the church is "one, holy, catholic, and apostolic," not necessarily patriarchal. The "impedimentum sexus" (Aristotle, Aquinas) is no longer credible. It is time to clarify the conflation of patriarchal gender ideology and our sacramental theology. For the redemption, and the sacramental economy, what matters is that the Word became flesh, a human being, not just a male.