Pope apologizes that statues were vandalized, says they were recovered

Pope apologizes that statues were vandalized, says they were recovered 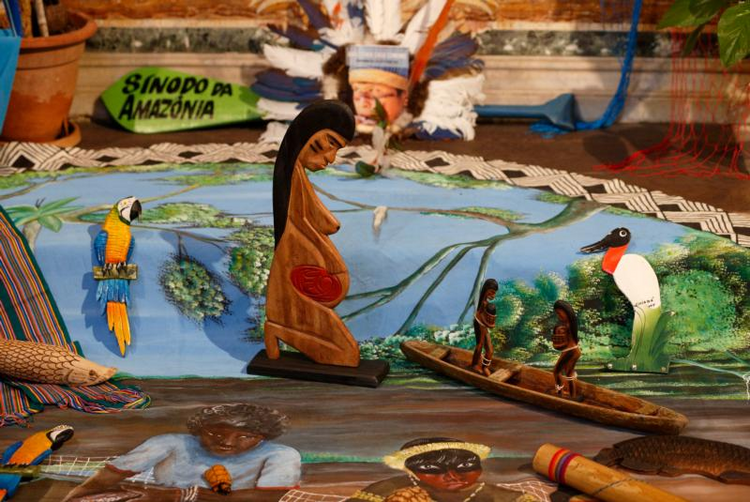 A wooden statue of a pregnant woman is pictured in the Church of St. Mary in Traspontina as part of exhibits on the Amazon region during the Synod of Bishops for the Amazon in Rome Oct. 18, 2019. (CNS photo/Paul Haring)

VATICAN CITY (CNS) -- Pope Francis apologized that two men entered a church near the Vatican, took controversial statues and tossed them into the Tiber River.

"As bishop of the diocese, I apologize," he said Oct. 25, the first time the full membership of the Synod of Bishops for the Amazon was gathered since the statues were taken from the Church of St. Mary in Traspontina Oct. 21.

Referring to the statue as "Pachamama," like many media had done, Pope Francis told bishops at the synod that the statues had been displayed in the Rome church "without any idolatrous intention," although the men who took the statues claimed on social media that they did so because the statues were idols. "Pachamama" is a term for "Mother Earth" used by some South American indigenous people.

Pope Francis apologized that two men entered a church near the Vatican, took controversial statues and tossed them into the Tiber River.

The pope also said that the statues, which floated, had been recovered by Italian police. The statues, "which created such a media clamor," he said, "were not damaged."

The statues are still in the custody of the Italian "carabinieri," the military police, who are awaiting instructions about what should be done with them, the pope said.

The commander of the carabinieri, he said, "suggested, for example, 'the exposition of the statues during the holy Mass closing the synod.' We'll see. I have delegated the secretary of state (Cardinal Pietro Parolin) to respond to this."

The statues are still in the custody of the Italian military police, who are awaiting instructions about what should be done with them.

The recovery of the statues, he said, "is good news."

The statues had been kept in several side chapels at the back of the Church of St. Mary in Traspontina, where prayer services connected to the synod were held daily during the synod.

The statue was present Oct. 4 when Pope Francis planted a tree in the Vatican Gardens and entrusted the synod to St. Francis of Assisi. It was used again Oct. 7 during a prayer and procession from the Basilica of St. Peter to the Vatican synod hall and early Oct. 19 as synod members and supporters prayed the Stations of the Cross on the main street leading to St. Peter's Square.

Statues, icons, paintings, drawings and stained glass scenes were appropriately used as media for recalling the good news, reminding of bible characters and events and adventures as a communication device for illiterate persons as well as readers.

Just as there has correctly been a series of judgments and pronouncements on ideas put in words, so too must there be judgements as to what are graven images, false idols and unique symbols as to their truth or falsehood, virtue or vileness.

Jews and Christians see the Creator taking slime or clay, fashioning into shape and breathing spirit into it.
Does an image of a pregnant woman depict that truthfully?
I think not. This is an image of a fertility goddess.

Could be. So what? Get a grip! An increasingly ultra-traditional church would be a shriveling church.
https://cruxnow.com/amazon-synod/2019/10/25/pope-apologizes-for-theft-of-pachamama-says-shell-be-back-on-sunday/
https://cruxnow.com/news-analysis/2019/10/22/perhaps-its-fitting-that-pope-francis-now-has-his-own-cadaver-synod/