Here’s what happened on day four of the Amazon Synod. 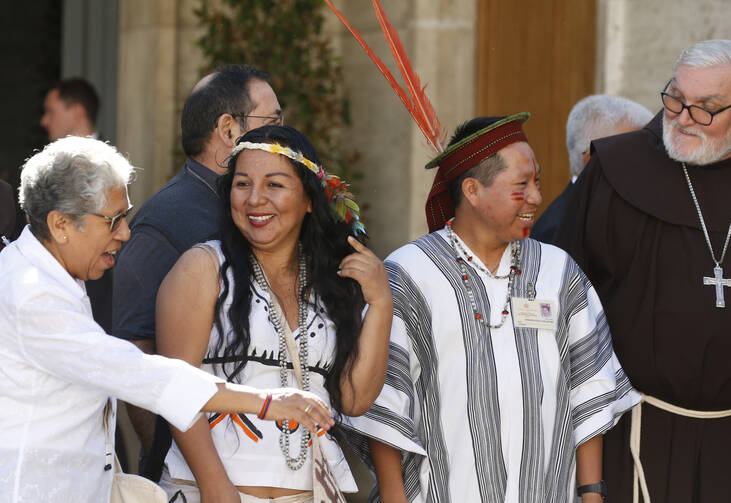 Participants leave a session of the Synod of Bishops for the Amazon at the Vatican Oct. 9, 2019. (CNS photo/Paul Haring)

The Synod of Bishops for the Amazon, currently taking place over three weeks in Rome, has entered a new phase, said Giacomo Costa, S.J., the synod’s secretary for information, at a press briefing on Oct. 10. On day four of the synod, the small language groups have begun to meet, signaling the moment in the synod process when “in a synodal way, everyone gives their contribution” and there is an in-depth “listening to experiences that are crying out, that have no voice.”

At previous Synods of Bishops in 2015 (on the family) and 2018 (on young people), several participants told America that of any part of the synod process, the Spirit was most clearly alive and at work in the small group meetings since these groups were places of encounter, listening and transformation among a variety of participants in the synod process—bishops, experts, auditors and fraternal delegates.

“Small groups have become a crucial place for listening and discernment during the official synod meetings.”

At the family synod, on the 50th anniversary of the institution of the Synod of Bishops, Pope Francis delivered a major address on his vision for a synodal church and explained he decided to consult the people of God in the form of two questionnaires before the official meetings of the synod as a way to learn the sensus fidei of the whole church. Francis asked: “How could we speak about the family without engaging families themselves, listening to their joys and their hopes, their sorrows and their anguish?”

For this reason, the small groups have become a crucial place for listening and discernment during the official synod meetings. At the present synod, there are 12 small groups: five in the Spanish language, four in Portuguese, two in Italian, and one in English/French.

On Oct. 10, the Vatican released a list of which participants had been elected to serve as relators and moderators of each group. Two Jesuit priests were elected as relators: Roberto Jaramillo of Peru, the president of the Conference of Jesuit Provincials of Latin America; and Alfredo Ferro Medina of Colombia, the coordinator of C.P.A.L.’s Pan-Amazonian Project. Two Jesuit cardinals were elected as moderators: Archbishop Luis Ladaria of Spain, the prefect of the Congregation for the Doctrine of the Faith; and Archbishop Jean-Claude Hollerich, the archbishop of Luxembourg and president of the Commission of the Bishops’ Conferences of the European Union.

According to a summary of synod discussions published by Vatican News, as well as what members of the Vatican communications team shared at a briefing on Oct. 10, synod participants have been emphasizing the interrelated nature of many issues at this synod: ecological destruction is a risk for the Amazon and the whole planet and constitutes a violence against the earth and against indigenous people; the importance of “a balance between inculturation and evangelization” and a “greater dialogue between theology and science”; and the conviction that issues that concern the church in the Amazon also concern the universal church, whether it is the importance of sacraments, the formation of ministers, the role of women or the protection of women against any form of violence.

“Participants have been emphasizing the interrelated nature of many issues at this synod, such as ecological destruction and a need for dialogue between theology and science.”

It is “important to keep the connection among all the themes” and to “combine the local and universal,” Father Costa noted. “In this tension, there is the prospect of a missionary synodality, a new face of the church, capable of announcing the contributions of everybody—lay persons and indigenous peoples and missionaries” and especially “women, recognizing the experience that is being lived out there.”

At the press briefing on Oct. 10, Gloria Liliana Franco Echeverri, O.D.N., of Colombia, the president of the Latin American and Caribbean Confederation of Religious, which represents religious women in 22 countries, said the group recognizes “the challenges we must rise up to: to live our vocation and communicate with passion, joy and hope the gifts we receive.” She added, “We want to walk with the church, in the church, to a new way of being church—more synodal and more participatory.”

Asked about the importance of women in church leadership, Sister Echeverri said that the church is experiencing a kairos moment, and “a sign of this kairos” is the number of female participants in this synod (33 women are serving as experts and auditors) and the “many others who have participated in the process of listening that took place before the synod.”

The church has a “female face” and “is a mother, a teacher,” she continued. “But in this time the church is a sister and a disciple, and for this reason we women still have a path to follow.” She said that women today are “not the protagonists because many before us have walked this path.” She gave the example of St. Clare of Assisi, “who played a part in reconstructing the church.”

The present time is “moment of grace” in which “the church is doing discernment” so that this “female face [of the church] becomes clearer,” she said. “God will continue to lead today in the church this process of discernment which continues to open up new paths.”

Sister Echeverri: The church has a “female face” and “is a mother, a teacher.”

Bishop Wilmar Santin, O.Carm., of Itaituba, Brazil, said his local church is “trying to intensify indigenous pastoral ministry” in order to “put into practice what the pope is calling us to do,” which is for the indigenous population “to give shape to the face of the Amazonian church.”

The bishop said he was inspired to begin a permanent diaconate formation program for the indigenous community after attending a meeting with Cardinal Claudio Hummes, O.F.M., general relator of the synod, in Manaus, Brazil.

The cardinal had said that “Pope Francis told him he has a dream of seeing that every village has its own indigenous priest. They spoke about the difficulties and the pope said, ‘Begin with what the church already allows: the permanent diaconate,’” the bishop recalled.

“When I heard this,” said Bishop Santin, “I said, ‘Let us start with this, with the permanent diaconate.’”

The diocese had wanted to begin with the formation of eucharistic ministers, the bishop said, but “we saw that it was much more important to begin with ministers of the word and not of the Eucharist.” The humid climate and swarms of ants in Itaituba make it difficult to preserve the consecrated hosts that permanent deacons or eucharistic ministers distribute in the absence of a priest.

Thus the diocese started by training lay “ministers of the Word,” now 39 men and nine women who celebrate and preach the Word in their native language. The bishop said the presence of these 48 lay ministers of the Word “fills me with joy” because it reminds him of Pentecost, where the people said, “We have heard in our own language about the great things of God.”

The next step, the bishop said, “is to ordain ministers for baptism and for matrimony.”

The people “have a great awareness of the importance of baptism,” he said, and when they are married, “they want the blessing of God” in a church, “not just married before the state.” Due to the vast distances of the region, “in every village there need to be ministers for baptism and for matrimony. We shall see, then, when the ordination of deacons is made possible.”

The presence of lay ministers also could help increase the church’s presence in indigenous areas where there are no Catholic churches, he said, recounting the story of a man who belonged to an evangelical church.

Here’s what happened on the first day of the Amazon Synod.
Luke Hansen

In the course of a conversation, he said, the man revealed that he had “two brothers who were priests and a sister who is a nun.”

“I asked him why he left the church,” Bishop Santin said. “He told me, ‘When I arrived, here, there was no Catholic church. I wanted to listen to the word of God, and I went to the church of the Assembly of God.’”

Bishop Santin told reporters: “We are not arriving in time to all the places because everything is centered on the figure of the father [priest]. We have to change a bit the structure of the church, so it is more agile, so that it can advance faster, so that it doesn’t depend just on the priest because if not, we will not fulfill our mission, which is to preach the word of God.”

According to the Vatican News summary of the afternoon plenary on Oct. 9, Pope Francis opened the session by praying for the “Jewish brothers and sisters” on the day of Yom Kippur, and at the end of the session he recalled in prayer the victims of the attack on the synagogue in Halle, Germany.

More: Synod on the Amazon

YES, Bishop Santin, Your Priority is in right order. The Word of God is FOUNDATIONAL. All other things come afterwards. It is Primary and FOUNDATIONAL.

Only when the Word of God is pronounced by the Priest, the Wheat Bread BECOMES the BODY of Christ, the FLESH of Jesus the Lord.

Hence WHY we need to give FIRST place to the Word of God in our day to day lives. When this is done the rest follows in order.

Please SEARCH on Internet for DETAILS. These are best suited to train People to PROCLAIM GOD'S SAVING WORD in AMAZON area.

Wonderful the Church is alive in the Spirit at this meeting. Let her continue to blow in fresh cleansing air. Yes the Spirit does wonders in small groups just like it did at Pentecost in a room filled with the 12 and Mary.

The sacramental priesthood was reserved for male baptised believers by Jesus Himself and so it continues according to His will.

There are historical precedents and contemporary men who do so and are married (married Anglican priests in Australia who came over to Rome preside as we speak) so that solution is possible.