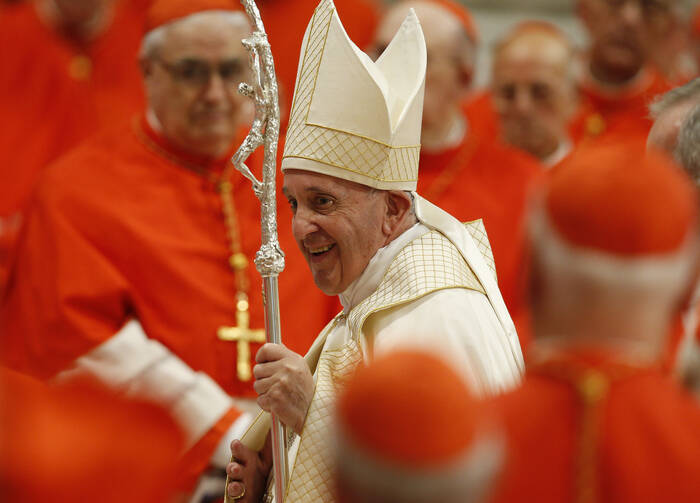 Pope Francis leaves in procession after a consistory for the creation of 13 new cardinals in St. Peter's Basilica at the Vatican on Oct. 5. (CNS photo/Paul Haring)

Compassion and loyalty are two essential qualities for a cardinal, Pope Francis stated in St. Peter’s Basilica today as he created 13 new cardinals, 10 of them with a right to vote in the conclave to elect his successor. He emphasized the intimate link between being compassionate and “the ability to be loyal in one’s ministry.”

He made clear in his homily that this was a message not only for those 13 new cardinals from 11 countries, dressed for the first time in their scarlet robes, but for the entire college of cardinals, most of whom were in the basilica for this colorful ceremony.

[Read more about all 13 new cardinals, who include three Jesuits.]

As a result of today’s consistory there are 128 cardinal electors (under the age of 80) with a right to vote in a conclave. Pope Francis has created a little more than half of them (67), with 43 created by Benedict XVI and 18 created by John Paul II. By Oct. 15, the number of electors will have been reduced to 124 because between four of the present electors will have reached the age of 80 and have lost the right to vote. Since one cardinal elector is currently in prison (George Pell of(Australia), if a conclave were to be held this year, there would be a maximum of 123 electors.

As a result of today’s consistory there are 128 cardinal electors (under the age of 80) with a right to vote in a conclave. Pope Francis has created a little more than half of them (67).

Europe now has 54 electors (including 23 from Italy); North America has 13 (nine from the United States and four from Canada); Latin America has 23; Africa has 18; Asia has 16; and Oceania has four.

Compared with the conclave that elected Pope Francis, there are fewer European and Italian electors today. Of the 115 cardinals who participated in the 2013 conclave, 60 were from Europe (including 28 Italians), 14 from North America (11 from the United States and three from Canada), 19 from Latin America, 11 from Africa, 10 from Asia and one from Oceania.

In today’s homily, Francis took his cue from the Gospel of the day (Mk 6, 30-37) which is about Jesus showing compassion. He reminded the thousands gathered in the brightly lit basilica—including relatives and friends of the new cardinals, the College of Cardinals, the diplomatic corps, and government delegations from Canada and the Archduke of Luxembourg—that “compassion is a key word in the Gospel. It is written in Christ’s heart; it is forever written in the heart of God.”

The pope directly asked the cardinals in front of him, “Do we have a lively awareness of this compassion that God feels for us?”

He said, “the more we read [the Gospels], the more we contemplate, the more we come to realize that the Lord’s compassion is not an occasional, sporadic emotion, but is steadfast and indeed seems to be the attitude of his heart, in which God’s mercy is made incarnate.” He reminded everyone that “this compassion did not appear suddenly at one moment in the history of salvation. No, it was always there in God, impressed on his paternal heart.”

The pope continued, “God’s love for his people is drenched with compassion, to the extent that…what is divine is compassionate, while, sad to say, it appears that what is human is so often lacking in compassion.” He recalled that the disciples of Jesus “often show themselves lacking compassion, as in this case, when they are faced with the problem of having to feed the crowds. In effect, they say: “Let them worry about it themselves…”

Francis, dressed in a white cope, noted that “this is a common attitude among us human beings, even those of us who are religious persons or even religious professionals.’”

“The readiness of a cardinal to shed his own blood...is secure if it is rooted in this awareness of having been shown compassion and in the ability to show compassion in return.”

Looking at the hundred or more cardinals seated in front of him, the pope said, “We can ask ourselves: are we conscious—we, in the first place—of having been the object of God’s compassion?” He put the question more directly: “In particular, I ask this of you, brother cardinals and those about to become cardinals: Do you have a lively awareness of always having been preceded and accompanied by his mercy? Do we have a lively awareness of this compassion that God feels for us?”

Francis added, “on this lively awareness also depends the ability to be loyal in our own ministry. This also holds true for you, brother cardinals. The readiness of a cardinal to shed his own blood— as signified by the scarlet color of your robes —is secure if it is rooted in this awareness of having been shown compassion and in the ability to show compassion in turn. Otherwise, one cannot be loyal. So many disloyal actions on the part of ecclesiastics are born of the lack of a sense of having been shown compassion, and by the habit of averting one’s gaze, the habit of indifference.”

After delivering his homily, Pope Francis read out the names of the new cardinals. The cardinals then recited the creed and read their oath of fidelity to Christ and obedience to the Successor of Peter. The pope and placed the red hat on the heads of the 13 new cardinals, and afterward put rings on their fingers and gave them the title to a church in the diocese of Rome. Henceforth they are members of the Roman clergy.

Pope Francis has held six consistories so far, and in all of them he has looked to the “peripheries” to make his choices. He has carefully chosen cardinals who share his ecclesial vision. He has also chosen men who are prayerful and humble, compassionate not judgmental. These are men with a missionary spirit, who reach out to people, who are not seeking status or career, who serve and not lord it over others, who embody the culture of encounter and dialogue, and who are sensitive to the sufferings of others. In making these selections, Francis has gone a long way toward ensuring that his ecclesial vision and legacy will be continued by his successor.

instead of wearing the red robes, they should have worn the striped jerseys of prison inmates so they might have a preview of what will happen to them if they do not uphold the laws of the societies in which they work (like Pell). And who are they supposed to be loyal to--the Church or civil society? The fact that they swore an oath of obedience to the Pope answers that question. This whole medieval monarchy with its princes is so out of date and out of touch with modern society.

History shows they all are doers. They are blessed with compassionate hearts.

Today, Over half the red hats came from Francis. In the next few days, because of retirements, this share will increase. And, if Francis is around for the next couple of years - simply because of more retirements - his share of appointments will grow even larger. Then, if makes one more round, the Francis appointments could reach the high 60% mark.

He understands this and since he thinks in decades, not days or years, he has set in motion a process for more changes.

Hey,I'm so excited my broken Marriage has been restored & my husband is back after he left me and our 2 kids for another woman. After 8 years of marriage, me and my husband has been into one quarrel or the other until he finally left me and moved to California to be with another woman. i felt my life was over and my kids thought they would never see their father again. i tried to be strong just for the kids but i could not control the pains that torments my heart, my heart was filled with sorrows and pains because i was really in love with my husband. Every day and night i think of him and always wish he would come back to me, I was really upset and i needed help, so i searched for help online and I came across a website that suggested that Dr.Solution can help get ex back fast. So, I felt I should give him a try. I contacted him and he told me what to do and i did it then he did a (Love spell) for me. 3day later, my husband really called me and told me that he miss me and the kids so much, So Amazing!! So that was how he came back that same day,with lots of love and joy,and he apologized for his mistake,and for the pain he caused me and the kids. Then from that day,our Marriage was now stronger than how it were before,All thanks to Dr.Solution. he is so powerful and i decided to share my story on the internet that Dr.Solution real and powerful spell caster who i will always pray to live long to help his children in the time of trouble, if you are here and you need your Ex back or your husband moved to another woman, do not cry anymore, contact this powerful spell caster now. Here’s his contact: Email him at:(solutionhome10@gmail.com), you can also call him or add him on Whats-app:(+2349060273197) for more information

Honestly, where the heck are the moderators?? Anyone there?? Knock knock...ring ring...beep beep.????

Why has George Pell not been removed from being a cardinal elector since he's in prison as a convicted serious criminal? Doesn't that make it rather obvious that he's not a fit and proper person to be able to rightly judge who should be the next pope?