A Catholic Cemetery Convention? Why focusing on ‘deathcare’ matters

A Catholic Cemetery Convention? Why focusing on ‘deathcare’ matters 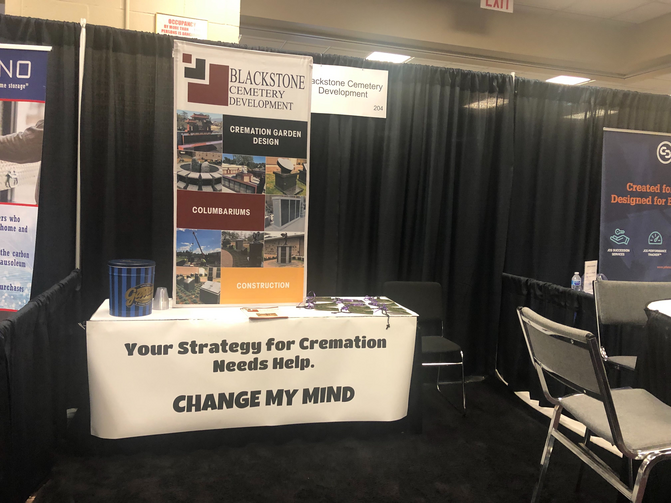 A dinner buffet was set up across from the “casket protection” vendor, which promised “proven solutions for the mausoleum” by way of large plastic bags that prevent “leaks, odor and infestation.” Just around the corner, about a dozen people waited in line for the open bar, which was stationed near a pile of brochures explaining the latest in human cremation equipment, which includes a “multi-chamber design” allowing “for rapid cremation time of approximately 100 minutes or less.” And by the front of the convention hall, a sign letting attendees know that a photo booth was available for their enjoyment.

This was the sometimes unsettling juxtaposition of jovial networking amid rows of death-related products at the Catholic Cemetery Convention held this week in Chicago. Richard Peterson, the group’s president, acknowledged that the scene can feel odd. But he said that the light atmosphere is driven, in part, by the Catholic belief that death is not final.

“Most people want to avoid death like crazy,” he said. “And yet, every single time we’re at Mass, we are reminded that we look forward to the resurrection of the body and life everlasting. That means we’re embracing the reality of death and what it means to us as Catholics.”

Mr. Peterson, who is in the middle of a two-year term as president, is also the director of cemeteries for the Archdiocese of Seattle. His ensemble embodied the juxtaposition between death and joy that was present at the conference. His dark suit was accented by Mardi Gras beads around his neck, part of a promotion for next year’s gathering in New Orleans.

One of the big trends in the “deathcare” industry—yes, that is what it’s called—is the pivot toward cremation. In recent years, more Americans chose cremation over casket and burial. In the nation’s more secular zip codes, the numbers are especially high.

Mr. Peterson noted that in his home state of Washington, about 75 percent of people who died were cremated. This presents challenges for Catholic “cemeterians”—another piece of cemetery jargon. Several of the vendors specialized in services related to cremation, including one booth, playing on the “debate me” meme, challenged conference attendees with a banner reading: “Your strategy for cremation needs help. Change my mind.”

The Catholic Church has permitted cremation for decades. But in 2016, the Vatican issued updated guidelines. “The ashes of the faithful must be laid to rest in a sacred place, that is, in a cemetery or, in certain cases, in a church or an area, which has been set aside for this purpose, and so dedicated by the competent ecclesial authority,” the document says. The spreading of ashes is prohibited, as is turning ashes into jewelry.

“How do we treat those things which are sacred? We treat them with care, dignity and respect. The church calls us to do that with our mortal remains as well,” Mr. Peterson said.

Human beings have been burying the dead for thousands of years, but the conference included several vendors offering modern technology to cemetery directors.

“How do we treat those things which are sacred? We treat them with care, dignity and respect. The church calls us to do that with our mortal remains as well.”

Ronen Rybowski is the president of Behar Mapping, a company that provides three-dimensional maps of cemeteries. He said a trend in housing human remains is going deeper into the earth—think multilevel mausoleums. In the past, cemeteries would rely on paper maps to keep track of where people were buried. That can get complicated, he said, and digital mapping helps eliminate mistakes and saves time. Plus, they allow family and friends to find their loved ones more easily—an essential amenity as interest in genealogy surges.

“Everyone uses a cell phone and GPS, and they want to find where a loved one is buried. So we have an app,” Mr. Rybowski said.

According to the research website Statista, the U.S. deathcare industry is worth more than $21 billion. Part of that money includes purchasing burial plots. Cemeteries must ensure that they will have the financial resources to care for the grounds, and some firms were on hand at the conference to offer information about financial products to cemetery directors. And there is the issue of attracting new customers.

Ryan Thogmartin runs Disrupt Media, a social media consultancy company focused on funeral homes. He works with more than 200 deathcare organizations, including some Catholic cemeteries. Social media, especially Facebook, is essential in reaching those most likely considering planning for funerals: women over the age of 55.

“Ideally, we want the cemetery to be a recurring presence in the newsfeed of the consumer so when they are ready to pre-plan or in an at-need scenario, this cemetery is top of mind from that engagement,” he said.

Mr. Peterson said Catholic cemeteries are responding to the changing marketplace when it comes to what people want when they die. They are offering more personalization options when it comes to gravestones; they are building columbariums to house ashes, and they are even moving into what he called the “natural burial” movement.

Interest in environmentally friendly funerals, which eschew toxic embalming chemicals and use biodegradable caskets, has been growing. Mr. Peterson said these types of burials are not at odds with church teaching, though cemeteries will need to make some changes if they are to begin offering them.

Death, Mr. Peterson admits, is a serious subject. He said part of his job is being there for families during difficult times. But the mood in the convention hall was light. People laughed as they shared drinks. The Catholic Cemetery Conference’s magazine, Catholic Cemetery, includes a section with photos of wild animals caught in amusing situations in graveyards. The conference included “Cemetery Jeopardy.”

That levity may surprise some people when it comes to their preconceptions about who works in the field, Mr. Peterson said.

“What they get wrong, they believe what they see from Hollywood,” he said. “That we are scary people. That we are to be avoided. That we have no personality.” He recounted one time in church when he met a woman who said she knew him as “the cemetery guy” and recoiled when he went to shake her hand. But he said the reality is different.

“What we really are are caring people who want to serve others in our church. We want to be Christ to others,” he said, before dearly departing to enjoy dinner—and to thank the casket vendors for their support.

Day by day large chunks of fellow humans show a preference for cremation. Cemeterians may soon be an endangered species.

Time to end the superstition that separating ashes makes bodily resurrection problematic. It is no different then putting a relic in an Altar.

But it cuts into Church profits.

I can wholeheartedly recommend "Don't drop the coffin! " by the English funeral director Barry Albin-Dyer. His small family business is based in a tough area of South London. His book is hugely informative, immensely touching and often riotously funny. If you want to know the Royal Family's funeral directors, ask Barry. His company owns one of the Queen Mother's Rolls-Royces, so the local working class occasionally ride to funerals in a genuinely Royal car. The attention to detail and genuinely caring approach is wonderful. The funeral cars carry colouring books to keep small children occupied. They also carry a battery powered keyboard for music in remote ancient cemetery chapels with no mains power. Barry recounts sitting for hours with a grieving young man. Shortly after wards the young man killed himself. He could not bear the loss of his mother.

Barry emphasises that being a funeral directors is a true vocation. Unless you are committed, it could be the worst job in the world.

I have argued and continue to argue for overturning the 1964 Holy Office decision allowing cremation. If cremation was banned because it was a "protest statement" by materialists once upon a time to deny the resurrection of the dead, it is fast becoming an approach that undermines Catholic theological anthropology by giving support to the idea that the body is not an essential part of the person but just a carbon footprint, best reduced to natural filler. But man is fundamentally and qualitatively different from the rest of the material world.

On the other side, I have also urged that November, which we normally celebrate to commemorate the faithful departed, should also be a month that churches engage parishioners to prepare for death and make decisions in that regard.