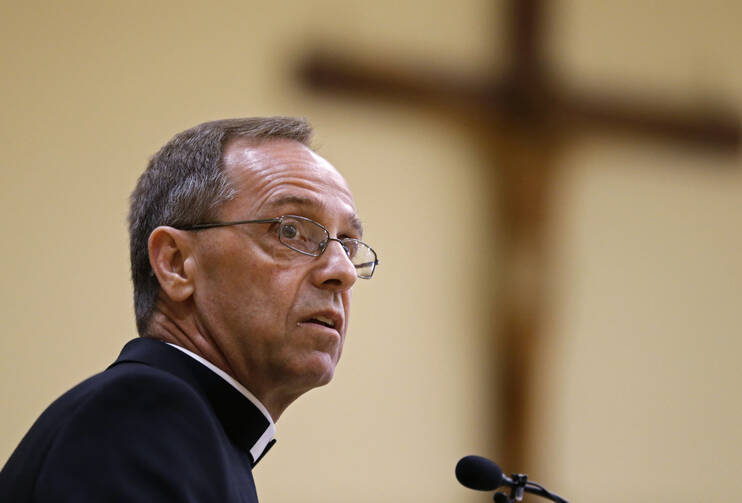 In this June 13, 2017 file photo, Bishop Charles Thompson speaks after he is introduced as the new archbishop of Indianapolis in Indianapolis. (AP Photo/Michael Conroy, File)

INDIANAPOLIS (AP) — The Indianapolis archbishop said Thursday that his orders for two Catholic high schools in the city to fire gay teachers was about upholding church teaching on same-sex marriage and not about sexual orientation.

Archbishop Charles Thompson said during a news conference that he didn't seek out information about the marriages involving the teachers but had to respond to what he called a "public situation" of Catholic school employees not following church doctrine.

Cathedral High School leaders announced Sunday that they were terminating the teacher's contract to avoid a split with the archdiocese that would cost the school its nonprofit status and its ability to have Mass celebrated on campus. That decision came just days after Thompson issued a decree saying the archdiocese would no longer recognize Brebeuf Jesuit Preparatory School as Catholic because it insisted on keeping a teacher who's in a same-sex marriage.

"This is not a witch hunt, we don't go looking for these situations," Thompson said. "When they are brought to my attention ... it is my responsibility, my duty, to oversee the living of the faith, especially for our ministerial witnesses."

The archdiocese requires all teachers, guidance counselors and administrators at Catholic schools to sign employment contracts that acknowledge they are considered ministers who must follow church teaching.

Thompson maintained Thursday that he wasn't focusing on same-sex marriages while overlooking school employees living together or who were divorced and remarried without receiving a church annulment. He said church leaders would help the employees take steps toward living according to Catholic teachings.

"It is about the living situation, it's not the orientation," Thompson said. "We would do the same thing if it was someone cohabitating."

Both Cathedral and Brebeuf are affiliated with religious orders and not directly run by the archdiocese. Archdiocesan-operated Roncalli High School of Indianapolis has fired or suspended two female guidance counselors in the past year because they're in same-sex marriages. The women have filed federal employment discrimination complaints and have said they intend to file lawsuits.

All three schools receive significant funding through Indiana's private school voucher program. Cathedral, for instance, received about $1.1 million last school year in voucher funding for about one-fifth of its 1,100 students, according to a state education department report.

The Republican-dominated Indiana House in February rejected a proposal from a Democratic legislator and Roncalli graduate to block voucher money from going to private schools that discriminate against gay employees and students.

Gina Fleming, the Indianapolis archdiocese's schools superintendent, pointed out that the voucher money isn't directed to the schools by state officials.

"It is the family that receives those voucher dollars to help pay for their tuition, their education and formation in our schools," she said.

A dream come true for His Eminence. Now he will be invited to dinner with Mike Pence, who ditched the Catholic Church for the bigoted sect he joined.

Only his Grace. He is not a Cardinal

He is driving people away

Once again, the Catholic hierarchy inserts itself in an untenable situation. Once again it comes down on the side of "rules". Let he who is without sin cast the first stone. But first let's clean out the divorced folks, the cohabitators and lord the clergy who have disregarded their vows. Keep following those rules Excellancy, pretty soon there won't be anyone left.

Archbishop Thompson doesn't seem to understand the Church's position on gay marriage. It is not a comment on the validity of a civil marriage, which does not involve the Church at all, but a prohibition on marriage in the Catholic Church. His argument smacks of sophistry. Enough has been said about the wrongness of such a decision in light of the biology of homosexuality and the love that Christ taught us we must have toward the least of his children. Remember the parable of the Good Samaritan where the Jews believed that God condemned the Samaritans for not following the faith as preached by Moses and a Levite priest followed the strictures of his office in refusing to contaminate his holy position by making contact with the wounded person's blood? Jesus cut through all this righteous nonsense and told us that the helpful Samaritan was the "neighbor" that God demands we all be. Archbishop Thompson is the Levite priest in the current drama and he should expect the same response from Jesus when he encounters him.

Has the Abp. enforced Church teaching regarding those in heterosexual "irregular relationships? Perhaps, none have been called to his attention because it's easier to turn a blind eye to those since they're not deemed as "offensive" to our morals.

Another grandstanding nasty gesture from a Church that has lost its' way.

The contract is a device by lawyers to fire anyone who has situations the Archbishop does not like. It is a dodge due to Hosanna Tabor and it will pass the smell test. The reason for all this posturing is because the National Organization for Marriage embarrassed itself by thinking the courts cared about the infallibility of Catholic doctrine on complimentarity. They lost big. Their stance is simple bigotry. They do not discipline civilly married heterosexual couples, although all civilly married couples are ignoring the doctrines expected of ministers.

There are Catholic children refugees in prison camps removed from their parents in conditions that would be considered a war crime if they were POW's. What is his priority? Sex

Funny you should mention that. The only married couple I know who are sponsoring a refugee family and inviting that family into said couple’s home are a gay married couple.

Funny you should mention that. The only married couple I know who are sponsoring a refugee family and inviting that family into said couple’s home are a gay married couple.

Same sex marriage is allowed by the Supreme Court. Is the Archbishop even prohibited under the employment laws to ask if someone is married, single or divorced? I understood those were not permitted questions because it is discrimination. We cannot enforce Church doctrine by practicing discrimination. We can however, categorize ministry to include and exclude certain school billets. The Archbishop is risking the nonprofit status of the Church. I urge him to be wiser.

No explanation or apology is necessary.
Canon law applied, canon law was broken, repentance was made available and defied.
End of story.
Just to be crystal clear, the Jesuits refused to comply with mandated conditions of employment for acknowledgement of a school to be endorsed as Catholic.

He is in a tough spot, considering where he lives. Cannon Law is made up by men. It is not infallible and can be changed. It isn't the teaching of Jesus at all. It will not get you into heaven no matter how strictly you follow it.

Paul, thank you. Canon law is essentially the policy and procedures handbook of the RCC.

Obedience, obedience, and more obedience.... But is obedience, in a Christian context, merely a matter of "following orders"? What if a superior commands you to practice "unjust discrimination"?

Ellen B
2 years 3 months ago

Are they throwing out everyone who is divorced? How about anyone who has lived with someone outside of marriage? Haven't been to confession in awhile or skip Sunday mass regularly?

Funny that they treat the homosexual teachers stricter than priests who abuse children... those they just shift to another parish.

These are the bishops who imposed the horrible new English translation of the liturgy.

Now they pursue a senselessly destructive policy, doing all in their power to wreck stable loving relationships and in practice telling gays and lesbians that casual sex is all they can expect.

In practice this contributed to the Aids epidemic.

The utter refusal of dialogue, and the reliance on robotic Vatican documents, bespeaks an opaque clericalist culture in which everyone has something to hide.

Not sure what vouchers has to do with this article

The Catechism of the Catholic Church speaks of the inclination toward homosexual acts as “objectively disordered” while, at the same time, insisting that persons with such inclinations “must be accepted with respect, compassion, and sensitivity. Every sign of unjust discrimination in their regard should be avoided.”
Thus, Archbishop Thompson fails to keep his oath of office when he unjustly discriminates against teachers who enter into same-sex civil marriages. I urge legislators not to punish parents who receive government scholarships to send their children to Catholic schools. Rather, Archbishop Thompson should be brought before the courts and be severely punished for his failure to protect those who have acted honorably according to the Supreme Court ruling in favor of same-sex unions. He cannot impede their civil rights. Even Pope Francis has gone on record to champion the rights of these civil unions.