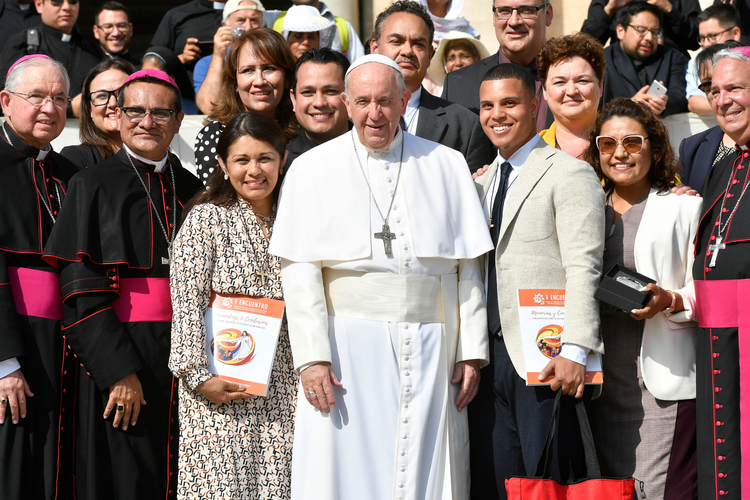 Pope Francis poses for a photo on Sept. 18 with members of a U.S. delegation that traveled to Rome to present the results of the Fifth National Encuentro to the pope and top Vatican officials. Archbishop Jose H. Gomez of Los Angeles, leader of the delegation, is seen at the far left. Next to him is Auxiliary Bishop Arturo Cepeda of Detroit and Paola Martinez of the Diocese of San Bernardino, Calif. To the right of the pope is Luis Pena of the Archdiocese of New York, Junuee Castro of the Diocese of Salt Lake City and Bishop Nelson J. Perez of Cleveland. (CNS photo/Vatican Media)

“Latinos are eager to participate in the life of the church in the United States, starting in the parishes and then going on and really becoming missionary disciples,” Archbishop José H. Gomez, vice-president of the U.S. Conference of Catholic Bishops, told America on Sept. 16.

Archbishop Gomez had come to Rome at the head of a delegation of U.S. bishops and laypeople to present Pope Francis with the proceedings and conclusions of the Fifth National Encuentro of Hispanic/Latino Ministry.” He told America, “I’m going to thank the Holy Father for supporting the V Encuentro in the United States because he sent a beautiful message to all of us.”

Joined by two other bishops on the delegation to the North American College in Rome, Archbishop Gomez explained that he also planned to describe the demographic impact of Latino Catholics in the United States, pointing out that some 40 percent of the U.S. Catholic community has a Hispanic background and that “more than 50 percent of the Catholics in the United States under the age of 18 are Hispanic.” He planned to remind the pope that there was a Hispanic presence in the country before the Mayflower pilgrims arrived and that Spanish was spoken in what would become the United States before English was.

Bishop Nelson Perez of Cleveland, another member of the delegation, told America, “In addition, we want to tell the Holy Father that in many ways the Encuentro is the incarnation of Aparecida and [the pope’s 2013 apostolic exhortation] ‘Joy of the Gospel’ in a missionary endeavor in the United States.”

The reference to the city of Aparecida, Brazil, where the Fifth General Conference of the Bishops of Latin America and the Caribbean was held in 2007, was significant because Cardinal Jorge Mario Bergoglio played a central role at that meeting before he became Pope Francis.

Bishop Perez, chair of the U.S. bishops’ Committee on Cultural Diversity in the Church, highlighted the fact that “the whole spirit of the Encuentro revolved around paragraph 24 of ‘The Joy of the Gospel’” and its reflections on “a community of missionary disciples that goes out into the periphery.”

Some 40 percent of the U.S. Catholic community has a Hispanic background and that “more than 50 percent of the Catholics in the United States under the age of 18 are Hispanic.”

He said, “That inspiration actually was the basis of the five sessions that took place in over 3,000 parishes in the United States with over 350,000 participants in 175 dioceses.” He described it as “a massive endeavor” that is now at “the halfway point.”

“We can continue now with gathering the hopes and the dreams, the aspirations of the people that were picked up along the way from the parish to the diocese, to the region and to the national Encuentro,” Bishop Perez said. He explained that the U.S. bishops are also receiving the Encuentro report and “will discern how to respond to the Hispanic community.”

A third member of the delegation, Bishop Arturo Cepeda, an auxiliary bishop in Detroit, was born in Mexico (as was Archbishop Gomez). He told America that the report that will be delivered to Pope Francis is the result of a “process of discernment, conversion, listening and consultation, that began from the grassroots—that is, in the parishes and dioceses in the United States.”

Bishop Cepeda, who is chairman of the U.S.C.C.B.’s Subcommittee on Hispanic Affairs, mentioned some of the main topics that church leaders heard about from the process. He said young Hispanics “moving into the second and third generation in the United States...want formation and leadership development.”

He said the Encuentro showed “the importance of the presence of ecclesial movements,” especially “in bringing about integral formation for families as they develop to become leaders and they develop in nurturing their faith.” He said he believed the church has a role in preparing Hispanic leadership in the United States to advocate for their communities on issues like health care and education.

Bishop Cepeda said the Encuentro revealed that “our people want to have a leadership that is well formed theologically and spiritually and catechetically.” To achieve this, he said, “we need materials that will reach out to our people in English and Spanish” that will “help our people grow in our faith and share that faith with others.”

Bishop Perez concurred on the importance of nurturing leadership for both the church and civil society among the U.S. Hispanic community. He recalled that about 20 years ago people spoke about the Hispanic communities as if they were only present on the U.S. coasts and in the Southwest. “But when we studied the demographic situation for the Encuentro,” he said, “we saw that the Hispanic community is in virtually every diocese in the country now.”

He noted that today “the Hispanic population is already the largest minority group in the United States, but it is a diverse group because they come from 23 different cultures and countries” and represent different waves of migration over time. He predicted that in 10 to 20 years, “probably more than 50 percent of the Catholic population of the U.S. will be Hispanic.”

He described the Encuentro “as a beautiful example of how the church is alive in the United States” and underlined that “it is important for the conference of bishops too,” who are already working to see “how to include the exercise and the conclusions of the Encuentro” in their future priorities.

“One of the things that stand out from the Encuentro,” said Bishop Cepeda, “is that the Hispanic community in the United States is now ready to take the leadership [and be] responsible for their baptismal call in the church, and not only in the church but also in the nation, to make a change.” At the Encuentro, he said, “you could see that we’re moving the process to become protagonists of who we are and what we can offer to the church and to the world, and that’s exciting.”

Bishop Perez added that the process that was used in the Encuentro is now being presented to dioceses all over the country as “Building the culture of encounter.” This language “goes beyond the Hispanic community to bring the message and the methodology of the Encuentro process to every parish and diocese that wishes to embrace that.”

He noted that “about 165 dioceses of the 175 Latin rite dioceses in the country, or 94 percent of the dioceses, are engaged in the Encuentro process, and about 125 dioceses attended the V Encuentro.”

Archbishop Gomez said he hopes that when Pope Francis receives the results of the Encuentro from the delegation, “he will encourage us to continue with this process and that he sees that his ministry is loved in the United States and that we are following his lead.”

Bishop Cepeda hopes that when Pope Francis receives the report, he will understand that “the Catholic Church in the United States is very much alive.”

Bishop Perez, for his part, hopes that “the Holy Father knows that the bishops of the United States heard the spirit of the ‘Joy of the Gospel,’ which became the framework and the foundation of the whole Encuentro process. It was actually his vision.”

Asked by America if he felt that the Hispanic Catholic church in the United States is strongly with Pope Francis, Archbishop Gomez responded without hesitation, “Absolutely!”

The other two bishops agreed. “The whole church is too,” they said.

Well, so much for the joy of all Catholics coming together in unity for our love of Christ. Perhaps we should just move on and schism into each of our identity/church groupings and call it a day. And, of course, worship Christ, just be certain to ignore Him.

The article totally lacks 2nd level data reality and I see this elsewhere in the Church. Readers need to see how many Latinos are actually Catholic in the full sense of attending weekly Mass and donating to keep parishes open and paying the bills. Right now there is a death penalty debate at one Catholic website and not one debater has mentioned the second level of data either....does the dp prevent future murders. Not one Pope nor one debater at that website has any interest in data reality. Likewise here. Do 70% of Latinos attend Mass on Sundays or 20% or 7%. From the article...heavy on cheerleading...we have no clue. We only know of the 4+% of clergy who sex abused because the Bishops hired an outside firm to study that problem. Had they not done so, we would have no clue therein either. We are the no data Church for some reason so used to self flattery in our writing have we become. Every article is the flattery of something and data works against flattery.