Pope Francis to visit Japan and Thailand in November 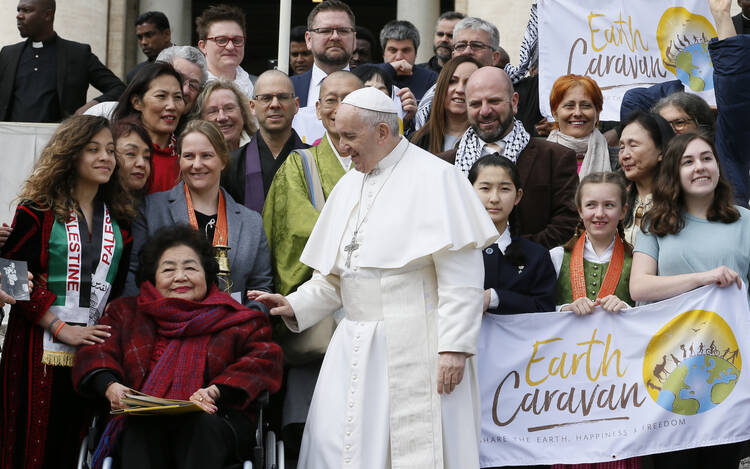 Pope Francis greets Setsuko Thurlow, a survivor of the 1945 atomic bombing in Hiroshima, Japan, and a delegation from the organization Earth Caravan during his general audience in St. Peter's Square at the Vatican March 20, 2019. (CNS photo/Paul Haring)

Pope Francis will visit Thailand and Japan from Nov. 19 to Nov. 26, the Vatican announced today. During his stay in Japan he will visit Tokyo, meet Emperor Naruhito and then go to Hiroshima and Nagasaki, the two cities destroyed by U.S. atomic bombs in 1945.

It will be his fourth journey to Asia since becoming pope. He went to South Korea in 2014, Sri Lanka and the Philippines in 2015, and Myanmar and Bangladesh in 2017.

Christians are a small minority of the population in all Asian countries, except for Timor Leste and the Philippines, where Catholics are the majority. But Pope Francis believes that Christianity and the Catholic Church can have a great future in this continent where two-thirds of humanity live. The Holy See has diplomatic relations with most Asian countries, including Thailand and Japan, but not China.

Pope Francis believes that Christianity and the Catholic Church can have a great future in this continent where two-thirds of humanity live.

Francis is the second pope to visit both countries. St. John Paul II visited Thailand in 1984 and Japan in 1981. It will be Francis’ second visit to Japan, a country he wanted to serve as a missionary when he was a young Jesuit. Pedro Arrupe, S.J., the head of the order at the time, turned down his request for health reasons. Francis went there first as a priest, after a meeting of the procurators of the Society of Jesus in Rome in September 1987, to visit Jesuits from the Argentine province working there.

On his 32nd foreign journey since becoming pope, Francis will go first to the Kingdom of Thailand, an overwhelmingly Buddhist country of 69 million people. Catholics there make up less than 1 percent of the population, around half a million believers. He will reside in Bangkok for the duration of his visit.

He is visiting Thailand to celebrate the 350th anniversary of the foundation of the Mission (Apostolic Vicariate) of Siam in 1669. (Siam is the former name of Thailand.) The Dominicans were the first Catholic missionaries to arrive in Siam in 1567, and their missionaries were killed two years later. They were followed by the Franciscans, then the Jesuits in 1606 and finally the Paris Foreign Missions, which arrived in 1662 and set up a mission in 1669.

The logo for the visit to Thailand mentions the establishment of the mission, with the motto “Christ’s disciples, missionary disciples.” It also includes the sign of the cross with three sails that symbolize the Holy Trinity.

The pope is also expected to meet his second cousin, Sister Ana Rosa Sivori, a missionary nun from Buenos Aires who is the vice principal of a girls school in Udon Thani.

While in Thailand, Francis is expected to visit King Maha Vajiralongkorn and celebrate Mass for the country’s Catholics. According to Associated Press, he is also expected to meet his second cousin, Sister Ana Rosa Sivori, a missionary nun from Buenos Aires who is the vice principal of a girls school in Udon Thani, about 355 miles northeast of Bangkok. Sister Ana Rosa and Pope Francis share one great grandfather.

Francis will fly from Thailand to Japan on Nov. 23. In Tokyo, he will meet Emperor Narhuito, who was educated at Oxford University and acceded to the throne on May 1 after the abdication of his father, Emperor Akihito.

From Tokyo, he will travel to Nagasaki and Hiroshima, the two cities that were destroyed by the U.S. atomic bombs in 1945, the only cities in the world to suffer such a fate.

After Pope Francis’ Africa trip, stay focused on a ‘poor church for the poor’
The Editors

Pope Francis is likely to again appeal for total nuclear disarmament in the world. He has not only condemned the threat of the use of nuclear arms as his predecessors had done, but he went further in a landmark statement. At a Vatican symposium on disarmament on Nov. 10, 2017, he firmly condemned “the very possession” of such weapons for the first time challenging the long-held moral acceptability of nuclear deterrence as a defensive strategy.

Japan has suffered not only from the devastation of World War II but from the undersea earthquake and tsunami off the Pacific Coast of Tōhoku on March 11, 2011, that caused the deaths of more than 15,000 people and did immense damage. The theme chosen for the pope’s visit is “Protect all life,” a phrase taken from the end of the prayer in his encyclical “Laudato Si’.”

Although the Vatican has not yet released the program of the visit to the two countries, in Japan Francis is expected to celebrate Masses for the tiny Catholic population of some one million faithful, less than half of whom are native Japanese; the rest are mainly migrant workers from the Philippines and other Asian countries. During his stay, he is also likely to visit the renowned Jesuit-run Sophia University in Tokyo and meet the former superior general of the Jesuits, Adolfo Nicolàs, who spent most of his life in Japan until his election as head of the Jesuit order, a position he held when Francis was elected pope.