After Pope Francis’ Africa trip, stay focused on a ‘poor church for the poor’ 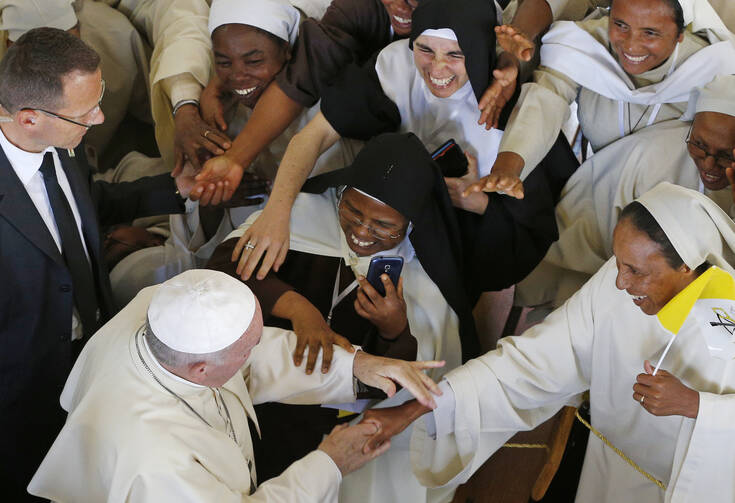 Over the last week in Mozambique, Madagascar and Mauritius, Pope Francis celebrated Masses with almost 1.5 million people in total. Most of the people at those Masses were poor, and in Madagascar, many people spent the night sleeping outside in the field where Mass was celebrated in order to be present.

Throughout this papal visit to Africa, the universal church was invited to see what a “poor church for the poor” looks like. One striking example was Akamasoa, a cooperative project outside the capital of Madagascar through which the local people have built more than 3,000 brick homes, along with schools and clinics, in what was formerly a garbage dump. In his remarks there, Francis described Akamasoa as “an expression of God’s presence in the midst of his people who are poor.”

That is what happened on the ground in Africa. But for much of the church in the rest of the world, it has been overshadowed by what happened on the plane. On the flight to Africa, Pope Francis described himself as “honored” by some attacks on him during an informal conversation with a French journalist who had written a book about American opposition to Francis. In the press conference on the return flight to Rome, asked about whether these attacks could lead to schism, Francis said, “There is always schismatic action in the church” but that it comes from “an elitist state, from ideology detached from doctrine” and from detachment “from the people of God, from the faith of the people.”

Those words on the plane make for striking headlines and lead to plenty of arguments about how Francis has responded to those who have criticized and attacked him. But despite the sometimes obsessive attention given to ecclesial factionalism and infighting, on the ground, among the people of God, something far more hopeful was going on. The Gospel was preached and good news was announced to those who are poor. Let’s keep our attention there.

There is nothing wrong with helping the poor. That has been the mission of the Church since the beginning. But it is also wise to understand poverty. That is why Thomas Sowell says we ask the wrong question. Not why some are poor but why so many are not poor any more. Poverty was the natural condition of mankind for all of history. That started changing 200 years ago so now while the world population is 7 times larger, the percentage in extreme poverty is less than 10%. Venezuela is a lesson that it can go from prosperous to poor while the rest of the world is going the other direction.

Actually it started changing in small places 300 years ago. First in England and Holland then in some English colonies. Pennsylvania was called the poor man’s country as even the lowliest could become prosperous. As an example 80,000 poor Germans came there in the 1700’s and most became prosperous. Philadelphia became the second largest city in the British empire and the most vibrant in all the Western Hemisphere. There is no reason it couldn’t happen in Mozambique or Madagascar if the right conditions happened.

The poor are blessed with strong faith. It's the poor that keep the church going.

It's easy to keep the poor in their impoverished condition, just follow Bergoglio's economic nostrums, far from "go forth, be fruitful and multiply". It has been said in these columns that Francis is neither a philosopher or theologian. I would add that his lack of knowledge of economics condemns hundreds of millions to misery. Is this "the Plan?".