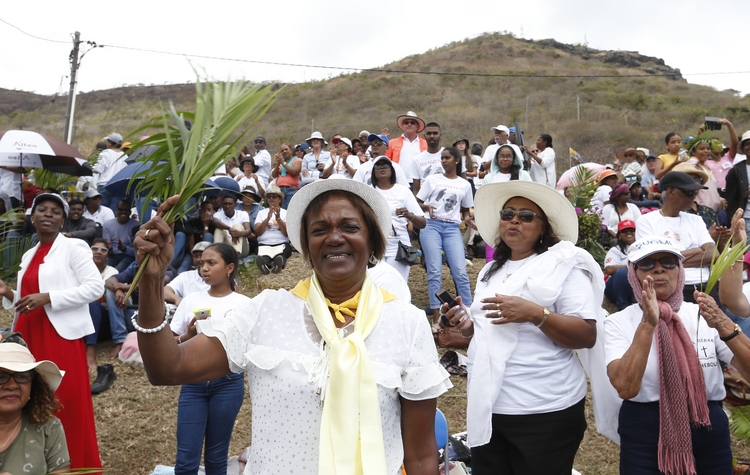 A woman waves palm fronds as people wait for the arrival of Pope Francis to celebrate Mass at the monument to Mary, Queen of Peace in Port Louis, Mauritius, Sept. 9, 2019. (CNS photo/Paul Haring)

Pope Francis spoke frankly in Port St. Louis, Mauritius, when he addressed the political, civil and religious authorities of this small island in the Indian Ocean on Sept. 9. He called on the government to welcome and protect migrants, resist every form of discrimination, combat corruption and promote an economic policy “focused on people.”

He encouraged the Mauritian people to support “a better division of income, the creation of jobs and the integral promotion of the poor.” He also counseled them “not to yield to the temptation of an idolatrous economic model that feels the need to sacrifice human lives on the altar of speculation and profit alone, considering only immediate advantage to the detriment of protecting the poor, the environment and its resources.”

He delivered this message at the presidential palace after holding private conversations with interim President Barlen Vyapoory and Prime Minister Pravind Kumar Jugnauth. Mr. Vyapoory’s predecessor had to resign on charges of misappropriating public funds, and Mr. Jugnauth, a Hindu, is considered the real power in Mauritius, a parliamentary republic based on the British system.

In his welcome address, the prime minister expressed the joy of the people at the pope’s coming to this island “as a pilgrim of peace,” referring to the motto of the papal visit. Mr. Jugnauth hailed Pope Francis as “a man of conviction, wisdom and dialogue, a man who breathes humility and simplicity and is very close to people, their sufferings and concerns.”

He encouraged the Mauritian people to support “a better division of income and the integral promotion of the poor” and “not to yield to the temptation of an idolatrous economic model that sacrifices human lives on the altar of speculation and profit alone.”

He said the pope’s presence would serve to “awaken conscience,” and Mr. Jugnauth thanked Pope Francis for his contribution to interreligious dialogue and his stances on climate change, the arms trade and the fight against poverty. Then he thanked the pope for his concern “for the sufferings of our citizens who were expelled from the Chagos Archipelago by Great Britain after separating that part from our territory on the eve of independence,” an issue of great concern to the Mauritian people. He recalled the recent judgment in Mauritius’ favor by the International Court of Justice, which calls for a rapid end to the British occupation.

Pope Francis began his address by expressing his esteem not only for the island’s “cultural, ethnic and religious diversity,” but “above all for the beauty born of the ability to acknowledge, respect and harmonize existing differences in view of a common project.” He was referring to the fact that over the centuries this country of 1.2 million people, which was colonized by the Dutch in 1598, possessed by the French in 1715 and controlled by the British from 1815 to 1968, has become a multiethnic, multireligious, multicultural and multilingual nation. Mauritius is shared by people of Indian-Pakistani, Creole, Chinese and French descent. Nearly half are Hindus, but Catholics (28 percent) and Muslims (17.5 percent) represent substantial minority faiths here.

He reminded the Mauritian people that their nation was “born of the arrival of migrants from different horizons and continents, who brought their own traditions, cultures and religions and gradually learned to be enriched by the difference of others and to find ways of living together and striving to build a society committed to the common good.”

Indeed, he said, today Mauritius is a lesson to the world on “reconciled diversity.”

He reminded them, “Your people’s DNA preserves the memory of those movements of migration that brought your ancestors to this island and led them to be open to differences, to integrate them and to promote them for the benefit of all.” For this reason, he said, “I encourage you, in fidelity to your roots, to take up the challenge of welcoming and protecting those migrants who today come looking for work and, for many of them, better conditions of life for their families.”

The pope’s appeal to the government to open its borders to migrants is significant. Two years ago, Mauritius offered citizenship to anyone who came to the island nation with a “contribution” of $1 million, but it has adopted what is effectively a closed-door policy to poor migrant workers from countries like Sri Lanka.

Francis recalled that since independence in 1968, Mauritius has had “a democratic tradition” and been “a haven of peace,” and he expressed the hope that “this art of living democracy can be cultivated and developed, especially by resisting every form of discrimination.” The mention of discrimination appears to allude to the fact that the jobs in public administration are mainly given to people of the largest, Hindu ethnic group.

Pope Francis then went on to call for the elimination of corruption in public life. He expressed the hope that “those of you engaged in the political life of the Republic of Mauritius may be examples to the men and women who count on you and in particular to the young.” He told them, “By your conduct and your determination to combat all forms of corruption, may you demonstrate the grandeur of your commitment in service to the common good and always be worthy of the trust placed in you by your fellow citizens.” He may have been alluding to the resignation of the former president and the former prime minister, who turned over power to his son without an election.

The island’s economy has depended on sugar, but today it has become a tax haven, a tourist destination and a textile producer. The pope recalled that since independence “the country has experienced a steady economic development that should certainly be a reason to rejoice”—around 5 percent growth in recent years. But he warned that “economic growth does not always profit everyone and even sets aside—by certain of its mechanisms and processes—a certain number of people, particularly the young.” Youth unemployment here stands at 25 percent.

He recalled that the Mauritian Cardinal Maurice Piat, in a letter on the 50th anniversary of Mauritius’ independence, called for the authorities to work for “an integral ecological conversion,” one that “seeks not only to avoid terrible climatic phenomena or extreme natural catastrophes, but also to promote a change in the way we live, so that economic growth can really benefit everyone, without the risk of causing ecological catastrophes or serious social crises.”

By highlighting the ecological question in his address, Francis was touching on something very important to the government and the people here, aware that sea level rise as a result of climate change represents a very grave threat to their island. The government is taking strong measures to reduce the emissions of CO2 here, but of course change must also be undertaken in other countries. Francis is perceived here to be an advocate for Mauritius on climate change; the prime minister in his speech hailed the pope as “an ardent defender of the environment” who had “brilliantly shown…that the external desert is created by the internal desert.”

Pope Francis also expressed “appreciation” for the way the different religions in Mauritius “work hand in hand to contribute to social harmony and to uphold the transcendent value of life against every kind of reductionism” and reaffirmed the desire of Catholics to participate fully in that dialogue.

He concluded by thanking the authorities for the warm welcome he received. “I ask God,” he said, “to bless your people and every effort you make to foster the encounter of different cultures, civilizations and religious traditions in the promotion of a just society, one that does not forget its young and, above all, those who are most vulnerable.”

From the presidential palace, the pope was driven to the airport to take the plane back to Madagascar, from whence he will return to Rome tomorrow.