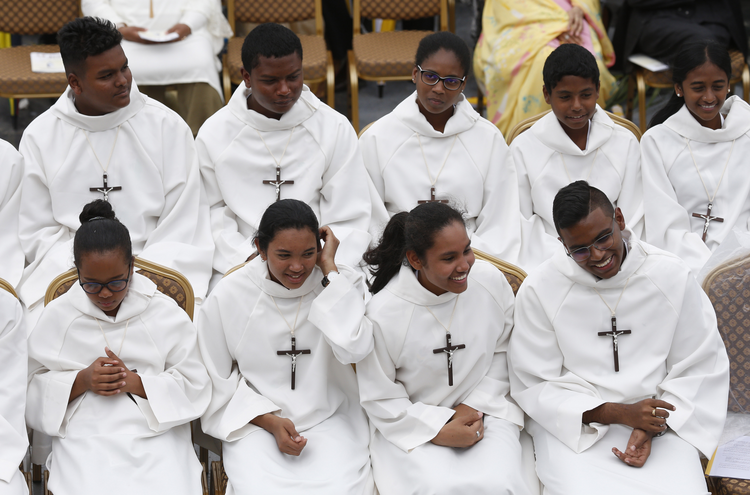 On Sept. 9, Pope Francis celebrated Mass in Port Louis, a small island in the Indian Ocean and the capital of Mauritius. Over 100,000 people waved palm branches and sang the Creole song “Un soleil se léve sur notre église” (“The sun is rising on our church”) as Pope Francis arrived at the Monument of Mary Queen of Peace. In his homily, he urged them to live the beatitudes in daily life, reach out and involve young people and develop a “missionary momentum.”

St. John Paul II celebrated Mass here in 1989, but from a historical perspective, there was something different this time. The Jesuits celebrated the first Mass ever on this island in 1616, and now 403 years later, the first Jesuit pope came to celebrate another Mass for the 368,000 Catholics who form 28 percent of the population. Many had lined the road to greet him as he drove from the airport to Port Louis, and a great many followed the ceremony on television. This celebration was special for another reason; today is the anniversary of the death of Pére Jacques-Désire Laval, the French missionary priest who worked here among the recently freed slaves in the mid-19th century. The government declared today a national holiday in honor of the pope’s visit.

For the 1.3 million inhabitants of this island, Pope Francis’ visit was something of enormous significance, as Valerie Kallee, a reporter for MBC, the national television network, and a Catholic of Indian origin, told America. “It’s huge and such a grace for this small country. Mauritius is honored that the pope should come to such a small place.” It was also significant, she said, because this island is now threatened from rising seas as a result of climate change, and he is a pope who is very sensitive to these issues.

The Jesuits celebrated the first Mass ever on this island in 1616, and now 403 years later, the first Jesuit pope came to celebrate another Mass for the 368,000 Catholics.

The pope celebrated the festive Mass in French, with prayers in Creole, French and English. The majority of Catholics here are Creole. Just under a third are of Indian origin, and many are of French or English origin. A small minority are Chinese.

Francis celebrated Mass under a canopy, over which stands the statue of Mary Queen of Peace, which the islanders erected in 1940 to thank God that Mauritius was spared from the First World War.

Speaking from that vantage point, where he could see the city and the sea beyond, Francis delivered his homily in Italian, with simultaneous translation into French and Creole, and focused on the Sermon on the Mount, which was read at Mass. He told the vast crowd before him: “We are part of a great multitude. A sea of faces come from Mauritius and other islands of this Indian Ocean region to hear Jesus preach the beatitudes.

“We have come to hear that same word of life that today, as 2,000 years ago, has the power and the fire able to warm the coldest of hearts.”

The beatitudes “are like a Christian’s identity card,” he said. “If anyone asks: ‘What must one do to be a good Christian?’ the answer is clear. We have to do, each in our own way, what Jesus told us in the Sermon on the Mount.” This is exactly what it the “apostle of Mauritian unity,” Father Laval, did, the pope said.

Francis said that “love for Christ and for the poor so marked [Laval’s] life that he could not conceive of an aloof and sanitized preaching of the Gospel. He knew that evangelization entails becoming all things to all people, and so he learned the language of the recently freed slaves and taught them the Good News of salvation in simple language.”

“Through his missionary outreach and his love, Father Laval gave to the Mauritian church a new youth, a new life, that today we are asked to carry forward.”

In this way, the pope said, “he was able to gather the faithful, to train them for mission and to establish small Christian communities in the neighborhoods, towns and nearby villages—small communities, many of which gave rise to present-day parishes.” Indeed, he said, “his pastoral solicitude earned the trust of the poor and outcast and made them the first to come together and find responses to their sufferings. Through his missionary outreach and his love, Father Laval gave to the Mauritian church a new youth, a new life, that today we are asked to carry forward.”

Drawing on this, Francis told the Catholics of this island, “We need to foster this missionary momentum because it can happen that, as the church of Christ, we can yield to the temptation to lose our enthusiasm for evangelization by taking refuge in worldly securities that slowly but surely not only affect the mission but actually hamper it and prevent it from drawing people together.”

He said this “missionary momentum always has a young and invigorating face” because “it is the young who, by their vitality and generosity, can give it the beauty and freshness of youth, when they challenge the Christian community to renewal and urge us to strike out in new directions.”

He acknowledged that “this is not always easy” for a church community to accept because “it means learning to acknowledge the presence of the young and to make room for them in our communities and in our society.”

The pope was aware that unlike Mozambique and Madagascar, where at least half of the population is under 18, in Mauritius most couples have one or at most two children, and the society is aging. According to the government’s own figures, 25.2 percent of young people are unemployed.

“Our young people are our foremost mission! We must invite them to find their happiness in Jesus.”

Francis focused on this problem in his homily: “It is a hard thing to say, but, despite the economic growth your country has known in recent decades, it is the young who are suffering the most. They suffer from unemployment, which not only creates uncertainty about the future but also prevents them from believing that they play a significant part in your shared history.”

Furthermore, he said, “uncertainty about the future makes them feel that they are on the margins of society, leaves them vulnerable and helpless before new forms of slavery in this 21st century.” He was referring to the fact that drugs, which come from Madagascar and South America, are a big problem in this country.

Francis told the local church: “Our young people are our foremost mission! We must invite them to find their happiness in Jesus—not by speaking to them in an aloof or distant way, but by learning how to make room for them, learning their language, listening to their stories, spending time with them and making them feel that they, too, are blessed by God.”

He urged them to draw on Father Laval’s example in relating to young people.

The pope is aware that there are very few priests serving the church in Mauritius—only 95 for the whole island—and they are aging, too. Likewise, vocations to the priesthood and religious are scarce. But he noted there are 1,335 catechists, and the church is depending more on the laity.

Pope Francis declared that “when young people see the project of a Christian life being carried out with joy, this excites and encourages them.”

He urged them not to lament the lack of vocations but to work first and foremost for vocations “to holiness” along the lines of the beatitudes. He said: “When we hear the threatening prognosis that ‘our numbers are decreasing,’ we should be concerned not so much with the decline of this or that mode of consecration in the church but with the lack of men and women who wish to experience happiness on the paths of holiness. We should be concerned with the lack of men and women who let their hearts burn with the most beautiful and liberating of all messages.”

“If anything should rightly disturb us and trouble our consciences,” he said, “it is the fact that so many of our brothers and sisters are living without the strength, light and consolation born of friendship with Jesus Christ, without a community of faith to support them, without meaning and a goal in life.”

Francis declared that “when young people see the project of a Christian life being carried out with joy, this excites and encourages them. They, too, feel a desire to say, in so many words: ‘I, too, want to climb this mount of the beatitudes; I, too, want to meet the gaze of Jesus and to learn from him the path to true joy.’”

He concluded by inviting everyone to “pray for our communities, that they may testify to the joy of Christian life and see a flowering of the call to holiness in the many and varied forms of life that the Spirit proposes to us.”

He reminded them that “Blessed Father Laval also experienced moments of disappointment and difficulty with the Christian community, but in the end, the Lord triumphed in his heart. For he had put his trust in the Lord’s power. Let us pray that that same power may touch the hearts of many men and women of this land and our hearts as well, so that its newness may always be capable of renewing our lives and our communities.”

At the end of Mass, Pope Francis thanked the Mauritian Cardinal Maurice Piat for this welcome, and he also greeted “with deep gratitude all the people of God here present and particularly the faithful from Seychelles, Réunion, the Comoros, Chagos, Agaléga, Rodrigues and Mauritius.” He assured them all of his prayers and asked them to pray for him.

Following the Mass, Pope Francis spent some time in prayer at the tomb of Pére Jacques-Désire Laval.

This comment is instructive: It’s huge and such a grace for this small country. Mauritius is honored that the pope should come to such a small place.” Hence those who are poor and in need of God see the Holy Father as a messenger of Light and Hope. Pope Francis is a Gift from God to the World. People see God is with him because it is so apparent.

“If anything should rightly disturb us and trouble our consciences,” he said, “it is the fact that so many of our brothers and sisters are living without the strength, light and consolation born of friendship with Jesus Christ, without a community of faith to support them, without meaning and a goal in life.”
The same could be said for many Americans who have no meaning in life, no goals and though surrounded in riches find themselves to be very much alone. Telling