Pope Francis to Mozambicans: ‘You have a right to peace’

Pope Francis to Mozambicans: ‘You have a right to peace’ 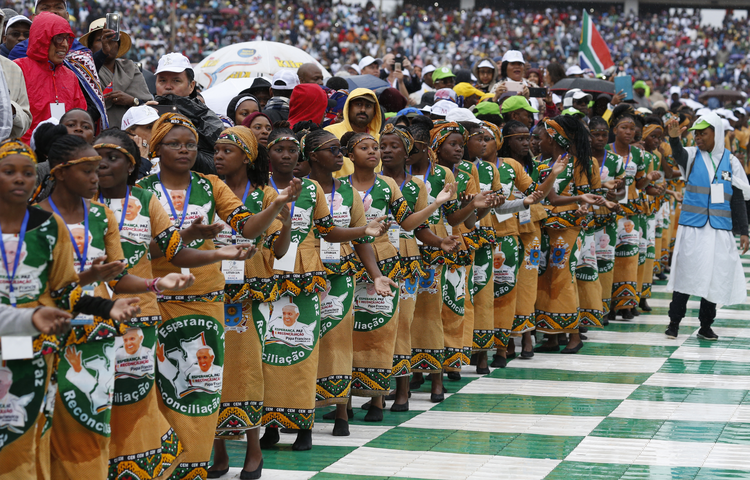 “You have a right to peace!” Pope Francis told the people of Mozambique in a powerful homily at a Mass that was broadcast nationally on radio and television. Before leaving the country on Sept. 6, Francis made a last, passionate appeal for reconciliation and the healing of the wounds that had opened in the hearts of the nation during its long civil war (1977 to 1992) and more recent spasms of civil violence.

“No family, no group of neighbors, no ethnic group, much less a nation, has a future if the force that unites them, brings them together and resolves their differences is vengeance and hatred,” Pope Francis told the 60,000 believers gathered in the stadium at Zimpeto, 15 miles from the capital city, in a zone marked by shanty towns and poverty.

In his first public address to the authorities yesterday, Francis praised the recent peace accord signed a month ago between the government and opposition Renamo, which could open a new era of peace and development for this land. In his first address, he spoke in a clear but diplomatic way, but today he spoke with great frankness, using more colloquial language, knowing well that he was addressing not just to those in the stadium but the country’s 30 million citizens.

He was greeted with ecstatic scenes of joy accompanied by the sound of African drums and rhythmic dancing when he arrived in the stadium, on this slightly cold and wet day. The crowd had cheered as they watched video footage of him being driven to the stadium from the nearby Zimpeto health center. That facility had been established by the Sant’ Egidio community and hosts its pioneering Dream project to assist AIDS/H.I.V. victims. When the pope finally reached this audience they cheered again.

In his homily at a Mass full of energy, drum beats and African song and dance, Francis spoke powerfully from the heart and told the crowd: “We cannot come to terms and unite for the sake of revenge, or treat others with the same violence with which they treated us, or plotting opportunities for retaliation under apparently legal auspices. Weapons of violence, rather than providing solutions, create new and more serious conflicts.” He reminded them that “an equity born of violence is always a spiral with no escape, and its cost is extremely high.”

He reminded them that “an equity born of violence is always a spiral with no escape, and its cost is extremely high.”

The audience listened in silence as he told them, speaking in Portuguese, “Another path is possible, for it is crucial not to forget that our peoples have a right to peace. You have a right to peace.” He told them that Jesus spelled out that path to peace and reconciliation in the Sermon on the Mount, which they had just heard, when he told his disciples “love your enemies” (Lk 6:27). Francis reminded the crowd that “today, his words are also addressed to us.”

Pope Francis said, “Jesus speaks with clarity, simplicity and firmness as he traces a path, a narrow path that demands certain virtues. For Jesus is no idealist, someone who ignores reality. He is talking about specific enemies, real enemies, the kind he described in the previous Beatitude (Lk 6:22): those who hate us, exclude us, revile us and defame us.”

Since independence in 1975 approximately one million people have died during Mozambique’s civil strife and millions were displaced from their homes or forced to become refugees. Pope Francis acknowledged this suffering. “Many of you can still tell your own stories of violence, hatred and conflict; some concerning things that happened to you personally, others concerning people you knew who are no longer alive, and others still, out of fear that the past wounds will reopen and reverse the progress already made towards peace, as in Cabo Delgado,” he said, a reference to the recent resurgence of violence in that part of the country.

He told them that “Jesus is not calling us to an abstract, ethereal or theoretical love, like that celebrated in fine speeches.” On the contrary, he said, “the path Jesus proposes is one that he himself already took, the path that led him to love those who betrayed him, who judged him unjustly, who killed him.”

Pope Francis admitted that “it is not easy to speak of reconciliation while wounds are still open from the years of conflict."

Pope Francis admitted that “it is not easy to speak of reconciliation while wounds are still open from the years of conflict, or to take a step towards forgiveness, which is not the same as ignoring pain or giving up our memories or ideals.” Even so, he said, “Jesus Christ is calling us to love and to do good. This means much more than simply ignoring the persons who harmed us or trying to avoid encountering them.”

He told them that “Jesus commands us to show an active, impartial and extraordinary benevolence towards those who have hurt us.... He also asks us to bless them and to pray for them. In other words, to speak of them with words of blessing, with words of life not death, to speak their names not in insult or revenge, but to establish a new bond which brings peace.”

Fully conscious from his experience in Argentina that this is a hard road, especially for people who have lost family members in the violence, Francis explained that “in inviting us to do this, Jesus wants to end forever that common practice of being Christians yet living under the law of retaliation. We cannot look to the future, or build a nation, an equitable society, on the basis of violence.” He put it even more explicitly: “I cannot follow Jesus if I live my life by the rule of ‘an eye for an eye, and a tooth for tooth.’”

While 70 percent of Mozambicans are Christian, including over 7 million Catholics, there are also millions of Muslims here and people of other religions. Pope Francis recalled “the golden rule” which all religions have in common and which Jesus proposed when he told his followers, “Do to others as you would have them do to you” (Lk 6:31).

Pope Francis said, Jesus told us “love one another” but, he noted, “the world disregards and continues to ignore the virtue of mercy, of compassion. It kills or abandons the handicapped and the elderly, eliminates the wounded and infirm, or shows itself more concerned with the suffering of animals. It has not practiced the goodness and kindness that lead us to consider the needs of our beloved neighbor as our own.”

“I cannot follow Jesus if I live my life by the rule of ‘an eye for an eye, and a tooth for tooth.’”

He told his nationwide audience, “overcoming times of division and violence calls not only for an act of reconciliation or peace, in the sense of an absence of conflict. It also calls for daily commitment on the part of everyone to an attentive and active concern that makes us treat others with the same mercy and goodness with which we ourselves want to be treated.”

Francis hopes that peace will lead to greater social justice and alleviate Mozambique’s widespread poverty. In his homily, he referred to the fact that despite Mozambique’s natural wealth, “great numbers of its people live below the poverty level” and noted that “at times it seems that those who approach with the alleged desire to help have other interests” and “sadly, this happens with brothers and sisters of the same land, who let themselves be corrupted.” In what seemed to be an allusion to attempts by foreign companies to gain lucrative contracts through illicit means, Francis said, “it is very dangerous to think that this is the price to be paid for foreign aid.”

He prayed that the peace of Christ “may act as the umpire” in their hearts “whenever our feelings are in conflict or we feel torn between two contrary feelings, and told them “we should play Christ’s game,” and let his decision keep us on the path of love, the path of mercy, in the option for the most poor and the protection of nature.

At the end of Mass, he expressed his thanks to President Filipe Nyusi “for the great consideration accorded to me both on a personal level and through the various governmental institutions and the security forces of the nation,” and he bade farewell to the local church, which had given him such a tremendous welcome. And then, after blessing them and asking them to pray for him, he got into his car amid resounding cheers and set out for the airport to fly to Madagascar for the next stage of his African journey.

I admire Pope Francis for his powerful appeals for reconciliation with a hope for peace for the opposing factions in a nation that has a long history of civil war. But there can be hope. As a man of Irish heritage I grew up learning about the troubles in Northern Ireland. The dispute was between Catholics and Protestants based on differences related to religion, culture, and economics. Rev. Ian Paisley was a fundamentalist Presbyterian minister who for decades fiercely attacked the Catholic Church and was a leader of the Unionists. These were those who wanted Northern Ireland to remain part of the United Kingdom. Catholics were primarily represented by Sinn Fein, a political party that favored the province being united with the Irish Republic. T ragically, some members of Sinn Fein supported the terrorist group the Irish Republican Army (IRA). For years there was ongoing violence between the IRA and the British army which (in the view of many Catholics/IRA supporters) ",occupied" Northern Ireland. Over many years and despite vigorously opposing efforts to bring peace between the two opposing factions, Rev. Paisley gradually moderated his views. He came to support sharing power with the political arm of Sinn Fein. In 2007, a crucial agreement was reached. Paisley was elected First Minister of Northern Ireland, and Martin McGunniss of Sinn Fein was elected deputy minister. Rev. Paisley in a speech before an international audience on May. 2007 in Northern Ireland said that he believed the power-sharing government agreement was the beginning of bringing peace to the province. An article by Catholic News Service (September 6, 2019) noted the Catholic lay-movement Sant'Egidio, helped mediate the Mozambique peace talks in the early 1990's. I'm proud that this Catholic lay group helped contribute to a lessening of political disputes that resulted in such horrific violence among different groups in Mozambique. I truly hope that with the support of the Church and the influence of Pope Francis that the nation's general elections on October 15 will lead to the election of leaders who will work both for lasting peace and economic development for all the people of Mozambique.

We need to work for peace and justice.