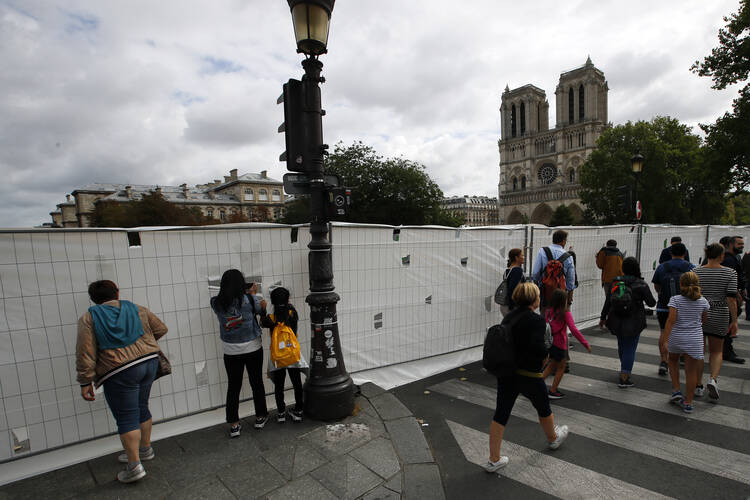 Tourists peer through protection panels securing a perimeter around the Notre Dame Cathedral ahead of the start of a massive lead decontamination in Paris, Thursday, Aug. 15, 2019. (AP Photo/Francois Mori)

Under a warm summer sun in Paris, a vast enclosure of scaffolding keeps much of the reconstruction work at Notre-Dame Cathedral hidden from curious onlookers. Seen from afar, not much has changed since April 15, when the cathedral’s wooden attic, roof and spire collapsed in flames as the world watched aghast. While the current work focuses on strengthening the fire-damaged walls of the church so they do not tumble, different ideas about how to restore the cathedral have been circulating among church and state officials.

Msgr. Patrick Chauvet, the rector and archpriest of Notre-Dame, would like to restore the cathedral exactly as it had been before the fire. That would mean recreating the great wooden attic, nicknamed “the forest,” that was consumed in the blaze. The forest had been a medieval engineering marvel built from more than 1,300 ancient oak trees.

“You don’t put your ego in this,” Msgr. Chauvet told America. “You are small and humble in front of this 900-year old building.” For Msgr. Chauvet, the work of the original cathedral builders must be respected. Restoring the cathedral to its previous glory and reviving the craft of masonry to that end he deemed “practical and noble work.”

Christophe Girard, Paris’ deputy mayor for culture and Socialist Party member, agrees. “There are so many contemporary architectural projects around the world already, so common; let’s leave Notre-Dame alone,” he said. To him, the attic, crisscrossed by giant, timber beams, had represented the genius of France’s craftsmanship.

“I had the chance to visit ‘the forest’ a week before the fire because there was construction work in the cathedral that I needed to oversee,” he said. “The memory of this extraordinary structure has stayed with me since then.”

Msgr. Patrick Chauvet, the rector and archpriest of Notre-Dame, would like to restore the cathedral exactly as it had been before the fire, recreating the great wooden attic, nicknamed “the forest,” that was consumed in the blaze.

Mr. Girard supports allowing visitors to tour the attic once it is rebuilt. “People need to know that humans did an extraordinary job 900 years ago,” he said. “It’s the first time I agree with the conservatives,” he added with a laugh.

Both men are determined to comply with the goal of getting most restoration done within five years, a deadline set by President Emmanuel Macron and approved by the French legislative assembly last July. “The idea is to give back the cathedral to [Archbishop Michel Aupetit] as soon as possible,” Msgr. Chauvet said.

Parisians hold Notre-Dame close to their heart, of course, and some object to the hurried schedule. Macha du Bourblanc, an author at the French Catholic magazine Le Rouge et le Noir told America that the restoration should be “a work of patience, affection and an awareness of a job well done; it’s not something industrial. How we can build something in five years that has taken hundreds of years to be built?”

Ms. du Bourblanc also looks forward to seeing Notre-Dame as it was before the fire, while respecting modern-day ecological norms. “We could, for example, paint metal beams to give it a wooden appearance and so avoid disfiguring the cathedral,” she said.

But Msgr. Chauvet and Mr. Girard are both hopeful that the forest will be rebuilt with wood, not metal. The French timber industry has stated it is ready to support the reconstruction of the attic.

Since the Notre-Dame is owned by the French state, public officials will make the final call. In July, some French parliamentarians tried to enshrine in law a commitment to rebuild the church as it was before the fire, but the measure did not pass.

“If we rebuild, we should do so modestly. Modestly means not spending large sums of money on it.”

For now, the public institution responsible for collecting funds to restore Notre-Dame has received almost 13 percent of the promised money from large and small donors alike. “We have received 110 million euros out of the promised 850 million,” Msgr. Chauvet said, explaining that large donors prefer to pay smaller sums in intervals to make sure the funds are used appropriately.

Plans to rebuild the forest with wood have provoked criticism at a time when comparisons between the Amazon fires and the Notre-Dame fire are made. To some commentators, the rush to make donations to rebuild the cathedral has been unseemly when compared to the apparent lack of public interest in raising money to suppress fires raging in the Amazon last month.

But Msgr. Chauvet argues the Amazon fires and the Notre-Dame fire are two very different issues. “One is about a climate and an ecological problem for the future of our planet, and in France, Notre-Dame is about a treasure, a heritage, and it’s also important for tourism,” he said.

“In our country, there will always be critics, and this time it will be because we [plan to use] wood.”

He believes the French people have been particularly moved to save the cathedral because of its importance to French culture and history and their attachment to the Virgin Mary’s motherly love, symbolized by her statue in the church. “People don’t always know who Mary is, but when we enter the cathedral, we feel safe in a turbulent world,” he said.

After another record-breaking heatwave, will Europe take the lead in the fight against climate change?
Melissa Vida

Charles Delhez, S.J., a priest from Belgium, initially believed the cathedral should be rebuilt to its previous form for the sake of art, history and nostalgia. But he has changed his mind.

“Sentimentally, I would say, ‘Yes,’ for the oak forest, but it was my own brother who made me think when he told me, ‘I won’t give a penny to rebuild the cathedral,’” he said. Father Delhez now believes that there are more urgent priorities to be addressed, like poverty around the world and in France itself and combating the fires in the Amazon.

“If we rebuild, we should do so modestly,” he said. “Modestly means not spending large sums of money on it.”

Without undermining the important symbolic nature of the cathedral, Father Delhez believes that “after seeing these flames in the Amazon forest,” he said, “we need to be aware of our blindness” to the great emergencies of our time.

“Is there a genius out there who would find a way to restore the cathedral in a modest way, but still save its beauty and symbol?” he wondered.