After another record-breaking heatwave, will Europe take the lead in the fight against climate change? 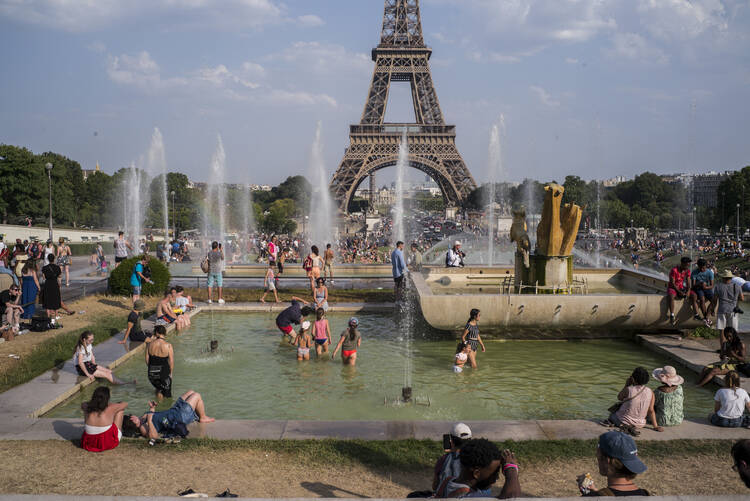 People enjoy the sun and the fountains of the Trocadero gardens in Paris, on Thursday July 25, 2019, when a new all-time high temperature of 42.6 degrees Celsius (108.7 F) hit the French capital. (AP Photo/Rafael Yaghobzadeh)

The air was stifling in the offices of the Jesuit European Social Center in Brussels, Belgium. Its director, Peter Rožič, S.J., paused a moment to consider the most suitable place to talk. “I had a Skype call earlier in our own offices and I nearly died of the heat,” he told America. “Better go downstairs, where it’s cooler.”

The sweltering conversation took place on July 26, at the end of the hottest week ever recorded in Belgium, Germany, the Netherlands, France and the United Kingdom. It was Europe’s second record-breaking heat wave this summer, with several European countries issuing public health warnings. Temperatures rose to more than 105 Fahrenheit (40.6 Celsius) in Belgium and reached 109 Fahrenheit in France.

People fainted on public transport in England after trains stalled and lost their air-conditioning. In Paris schools postponed exams and the fire-damaged Notre Dame Cathedral was at further risk as its ancient, water-soaked masonry dried and crumbled. The heat wave also aggravated wildfires in Spain and Portugal, and in Scandinavia it threatened to hasten Arctic melt.

At the Jesuit center, water was served on the table with more reverence than usual. J.E.S.C. has been working on multiple fronts to raise awareness about climate change.

People fainted on public transport in England. In Paris schools postponed exams, and the heat wave aggravated wildfires in Spain and Portugal. In Scandinavia it hastened Arctic melt.

This election cycle, “the question of ecology came to the fore in some countries, which was an interesting turn, and, I think, a positive one,” Father Rožič said.

In the Continental balloting, the fear of global warming appears to have outpaced the fear of migrants by a few votes. Green parties in Parliament now hold 74 seats—22 more than before. Greens saw a rise in Germany, Finland, France, Ireland and the United Kingdom. Traditional center-left and conservative-right parties lost their majority for the first time since elections were held in 1979. Now they will have to share power with a rebranded center-right party, called “Renew Europe,” and the Greens.

Confounding pre-election polling, nationalist parties did not win as many seats as they were expected to. Rebranded in the parliament as Identity and Democracy, that group, led by Marine Le Pen of France and Matteo Salvini of Italy, captured 73 seats, landing it in fifth place right behind the Greens.

For Olivier Costa, director of European Political and Governance Studies at the College of Europe, that outcome represents a victory for pro-Europeans. “The Euroskeptics will still carry weight in the European Parliament, but less than what was expected,” Mr. Costa said. “And symbolically, it is a real setback for them.”

Migration is still framed in European politics as a fundamental challenge, but after the heat, climate and environmental policies may enjoy a boost in attention. As a candidate, Ms. von der Leyen, the first woman to be elected president of the European Commission, added ambitious climate goals to her agenda for Europe. She plans to propose a “European Green Deal” in her first 100 days after she assumes office in November. If accepted, her plan could mean that Europe would become the first carbon-neutral continent by 2050.

Ms. von der Leyen will seek to reduce the use of fossil fuels in energy-intensive industries and plans investments in strategies to minimize waste. She also promotes a “Just Transition Fund” to ease adaptation of the new technologies that will be required for this shift in production and energy use.

“Becoming the world’s first climate-neutral continent is the greatest challenge and opportunity of our times,” she writes in her proposal. “Europe sees itself as a leader on this.”

Comece, the Commission of the Bishops' Conferences of the European Union, “supports making the union carbon-neutral by 2050,” according to a statement delivered to the current presidency of the E.U. Council, one of Europe’s governing institutions.

If the European Union requires more green measures from aid recipients or trading partners, it may lose diplomatic or economic ground to competing world powers. “The environment is not a major concern for the Chinese, the Russians or the Americans: They do business,” Mr. Costa said.

The European Union could have more leverage if it had more aid money to offer, he said, but while E.U. member states maintain their own overseas aid budgets, the European Union itself disburses a tiny, “relatively ridiculous” foreign aid budget. The union’s entire budget, in fact, represents a small fraction—2 percent—of the combined national budgets of all 28 E.U. countries.

What influence on climate policy the European Union can achieve derives from its reputation, commercial power and through the regulatory and ethical norms it can help establish, according to Mr. Costa. Advocates at Comece and Caritas Europa argue that the European Union has the means and the obligation to lead on the issue. “Europe has a huge responsibility in contributing to climate concerns in its development aid and in reducing the use of fossil fuels,” Ms. Pfohman said. “Europe is part of the problem and the poorest countries are suffering the most.” She argued that Europe has a historical debt to pay in mitigating climate change.

Ms. Pfohman remains hopeful because of widespread agreement on practical policy shifts that could mitigate climate change. But “the challenge is how to get politicians, who are only there for short term mandates, to be willing to implement [them].”

Father Rožič noted that E.U. politicians also worry about the kind of backlash represented by the Yellow Vests protests in France if they are too aggressive on climate change. That grassroots movement broke out when President Emmanuel Macron increased taxes on fuel as part of an energy transition plan in 2018. Listening to the concerns of the public, including the poor, who are most affected by climate change, and the youth, who have been demonstrating for ambitious climate policies, is crucial, according to Father Rožič.

Listening leads to conversion, he said. A few months back, when the European Commission members asked Father Rožič what to do about climate change, he told them that the response starts with the people around the table. “It's about being convinced and changing one’s behavior.”

He said the E.U.’s politicians must accept that the threat of climate change is real before real change can happen and urges them to consider imaginative responses to the crisis. He thinks they could start by setting a good example themselves.

Air travel has proved a significant contributor to the production of greenhouse gases. “It would be wonderful to see European leaders go to a meeting, let’s say in Slovenia, by train or by boat” instead, Father Rožič said.

It was a cold winter. And I was told that temporary weather patterns mean nothing.

LOL. After each time that the weather is extremely cold, we're always told we're so stupid to confuse weather with "climate." But the reverse is never true, is it? And we call these people "scientists?"

You do realize it is not just this current heat wave that scientist are talking about. You do realize that due to global warming that 1/2 of what was the Great Barrier Reef in Australia has already died and the rest is continuing to die out and that almost all other ocean reefs are dead or dying as we speak? That has nothing to do with, Gee! it is just another typical 108 degree day in France (which is not at all typical for France or Europe!) In the U.S. there are already areas that for centuries and I assume much longer have had healthy clam beds that now can't produce healthy clams because the warmth of the water won't allow for the shells to form in the early stages.

Fossil Fuel use and overpopulation are doing a number on our climate and hiding our heads in the sand is not going to stop the reality from overtaking us later on. The time to wake up is now! More accurately the time to wake up and change things meaningfully was 50 years ago, but we didn't, so now it is even more important because this situation is ready to explode on a global scale many have not truly begun to imagine.