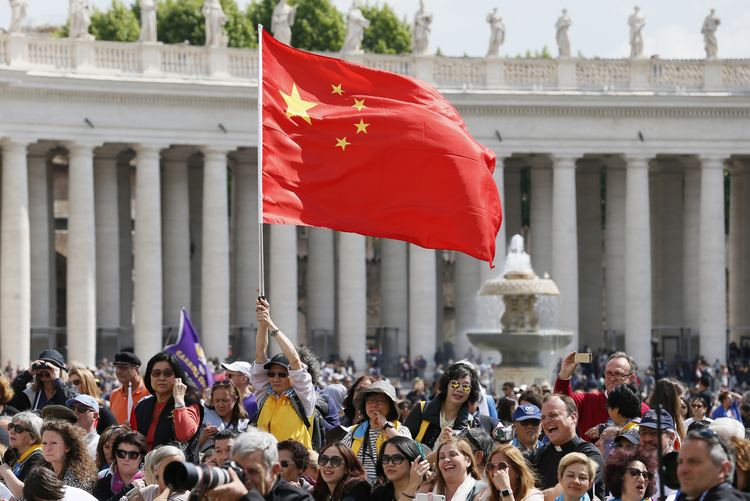 A man waves the Chinese flag as Pope Francis leads his general audience in St. Peter's Square at the Vatican May 22, 2019. (CNS photo/Paul Haring)

VATICAN CITY (CNS) -- The ordination of Bishop Anthony Yao Shun of Jining in China's Inner Mongolia autonomous region was the first episcopal ordination in the country following the provisional agreement signed in 2018 between China and the Vatican.

The Aug. 26 ordination was "the first to take place in the framework of the provisional agreement" on the appointment of bishops, Matteo Bruni, director of the Vatican press office, said in a written statement Aug. 27. Details of that agreement were never made public.

Bruni confirmed that Bishop Yao "received the papal mandate, as was also stated by the ordaining bishop during the ceremony" in China.

Two days later, a second bishop was ordained; Father Stephen Xu Hongwei, 44, was ordained Aug. 28 as coadjutor bishop of Hanzhong in the northern state of Shaanxi.

The Vatican approved Bishop Xu as a candidate in April, but, like Bishop Yao, there was a monthslong wait for the government to give the appointments the go-ahead, according to ucanews.com.

Bishop Yao was ordained bishop by Bishop Paul Meng Qinglu of Hohhot, a vice chairman of the Chinese Catholic Patriotic Association. Three other bishops and more than 120 priests concelebrated, and 50 nuns and more than 1,000 Catholics attended the Mass.

During the ceremony at Our Lady of Rosary Cathedral in Jining, a letter by the Bishops' Conference of the Catholic Church in China was read aloud, stating that Bishop Yao had been elected "according to the tradition of the election of bishops by the holy church and the regulation of the (bishops' conference)."

"After verification and a valid election, we give an official approval now. This candidate was approved by the pope," the letter said, according to ucanews.com.

The nomination and assignment of bishops had been a key sticking point in Vatican-Chinese relations for decades; the Catholic Church insisted that bishops be appointed by the pope, and the Chinese government maintained that would amount to foreign interference in China's internal affairs.

Vatican officials always said that giving up full control over the nomination of bishops would not be what it hoped for, but that it could be an acceptable first step toward ensuring greater freedom and security for the Catholic community there.

When the provisional agreement was signed in 2018, Pope Francis also lifted the excommunications or irregular status of seven bishops who had been ordained with government approval, but not the Vatican's consent. The move meant all of the Catholic bishops in China were in full communion with the pope for the first time in decades.

Vatican News said Bishop Yao chose "Misericordes sicut Pater" (Merciful like the Father) as his episcopal motto, the same motto as the 2015-2016 Jubilee Year of Mercy called for by Pope Francis.

Bishop Yao, who was born in Ulanqab in 1965, was ordained a priest in Jining in 1991. He studied in the United States from 1994 to 1998 and pursued a specialization in liturgy at St. John's University in Collegeville, Minnesota. He also spent time in Jerusalem concentrating on biblical studies.

The bishop, 54, who is considered a liturgy expert in China, taught and worked as a spiritual director at the national seminary in Beijing. He has been working in the liturgical commission that is under the Patriotic Association and the Council of Chinese Bishops since 1998, serving now as its vice director.

Why the Vatican’s potential deal with China is a good thing
Drew Christiansen, S.J.

It is believed that Bishop Yao was secretly approved by the Vatican in 2010 when he returned to the Diocese of Jining from Beijing. In Jining, he served as vicar general of the diocese.

Jining has about 70,000 Catholics served by 31 priests, one deacon and 12 nuns. It has two seminarians, ucanews.com reported.

Bishop Xu was ordained by Bishop Joseph Ma Yinglin of Kunming, head of the Bishops' Conference of the Catholic Church in China. Seven other bishops concelebrated and about 500 people attended the Mass at St. Michael Cathedral in Hanzhong.

Bishop Xu, who was born in Shaanxi in1975, was ordained a priest in Hanzhong in 2002. He studied pastoral theology in Rome and served in the Archdiocese of Vancouver, British Columbia, from 2008 to 2010, according to ucanews.com.

It's kind of hard to imagine any dialogue with the Chinese that is fruitful. The concept of freedom is not in their lexicon. Hopefully this will work out well.