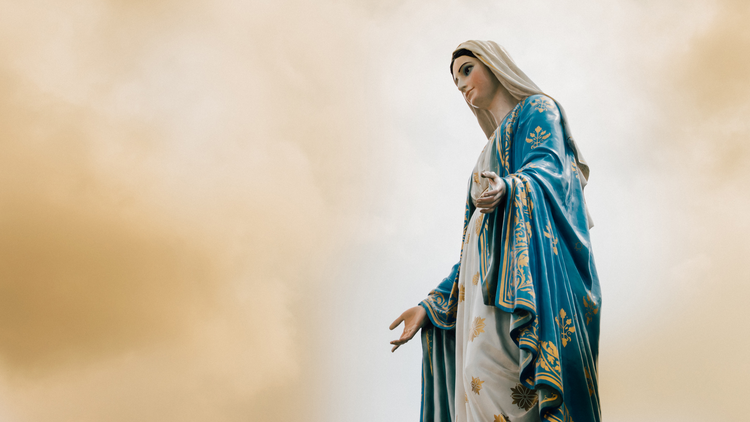 In “Pietà” the Welsh poet and Anglican priest R. S. Thomas (1913-2000) echoed the deep union of mother and son, which Michelangelo so famously sculpted. The bond between a mother and son is one of earth’s strongest, yet already in the Gospels, the church was insisting that another bond was the stronger: the deep adherence of Mary the disciple to the mission of her Son the Savior.

St. John presents Mary as the model disciple, who teaches us to “do whatever he tells you” (Jn 2:5). St. Luke insists that the Holy Spirit infused both mother and son at the very moment of the child’s conception.

Father Thomas’s poem expresses the constant conviction of the church that Mary is not a mere instrument nor are the sacred events recorded in the Gospels some of what were many possible scenarios. The incarnation of the Son in the womb of the virgin was the preeminent work of God. As such, it exceeds chance, possibility, even fate.

Doctrines and dogmas do not exist to provide esoteric data. Their purpose is always to tell us who we are, to proclaim who we can be in Christ.

Here are the two small stanzas of the poem. The scene is Calvary, but the time is decades before the death.

Always the same hills
Crown the horizon
Remote witnesses of the still scene.

And in the foreground
The tall Cross,
Sombre, untenanted,
Aches for the Body
That is back in the cradle
Of a maid’s arms.

Doctrines and dogmas do not exist to provide esoteric data. Their purpose is always to tell us who we are, to proclaim who we can be in Christ. In 431 C.E., it was not piety or devotion that led the Council of Ephesus to declare Mary to be the Mother of God. Once the priest Arius, always quoting from sacred Scripture, had declared that Jesus had not always been the Son of God, the church responded by rooting his identity, and therefore that of his mother, in the pure plan of God. There was never a moment when he was not the Son of God. Therefore, even in the womb and at his birth, the Virgin was the God-bearer, the Mother of God.

Belief in the Assumption of the Blessed Virgin Mary also arises very early in the history of the church, though, like so many foundational beliefs of all Christians, it would take time and meet with some resistance before its truth would be clear.

Because both belong fully to God, nothing separates mother and Son. Her assumption is the clear echo of his resurrection.

To say that the Virgin was conceived immaculately is to insist that our salvation was preordained by the will of the Almighty. To say that she left this earthly life and entered into resurrected glory, body and soul, much as her son had before her, is to say that God’s deepest design for Mary, his creature, was to be given fully, absolutely and without corruption back to her creator.

On the Assumption of Mary: Why sinners fear death more than the saints
Terrance Klein

Because both belong fully to God, nothing separates mother and Son. Her assumption is the clear echo of his resurrection. But all of this is proclaimed to teach us that only sin—and whatever measure of us it has claimed—limits our life in Christ. Christ did not need death to free him from sin. He chose the dread for us. His mother did not experience death as we do because Christ had given her the grace to stand free of sin.

Sin brought death, as we experience it, into the world. Calvary overturned its direction. Everlasting death was the fruit of sin. Now, death is the portal that sets us free from the very possibility of sin. Mary was inseparable from Jesus in the plan of God. Soon enough, when death sets us free from sin, we will be as well.

Mary is one of the most problematic figures from the NT for me. There isn't much about her in the gospels - in some she isn't even mentioned by name - but the church has built up a whole legend about her. There's nothing about the assumption in the gospels, nothing about Mary's perpetual virginity, nothing about her immaculate conception. She wasn't the "modal disciple" ... she thought Jesus had flipped his wig! (Mark 3:20). The church does use these stories it invents to try to tell women who they are = that we have to be subservient, that motherhood is our main purpose.

my thoughts exactly!!!! so much of what we are 'fed as 'gospel' is simply a way to give words to a concept--not a reality. at some point, the institutional church will need to acknowledge this truth........ we are no longer ''little children'' who believe in Santa Claus. we are, in fact living, breathing 'adults' who want to acknowledge that our parents worked very hard to put gifts under our ''tree.'' ..and so it is with all.

Thank you, Fr. Klein, for another beautiful reflection. Love the two stanzas, the image of the aching cross.