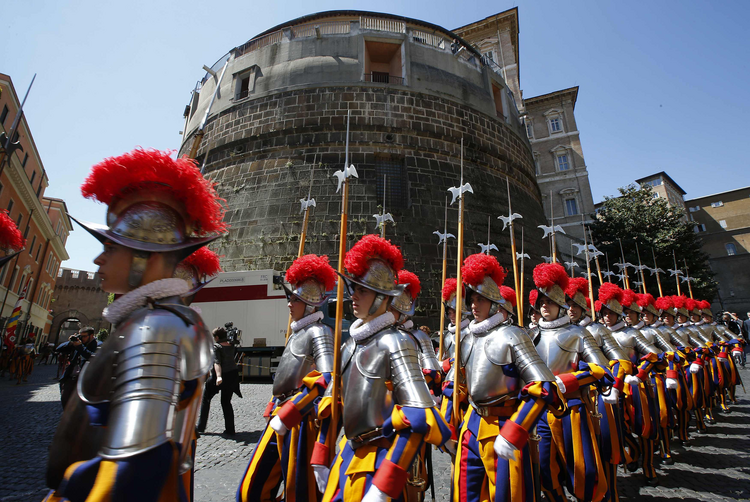 In this 2014 file photo, recruits of the Vatican's Swiss Guard march in front of the tower of the Institute for Works of Religion. (CNS photo/Tony Gentile, Reuters)

Pope Francis has approved newly revised statutes for the Institute for the Works of Religion (I.O.R.), often referred to as “the Vatican Bank,” to ensure that it not only meets the highest international standards in the financial field but is faithful to its original mission and conducts its business solely for “the works of religion and of charity.”

The I.O.R. was a cause of major concern to the cardinals when they met in March 2013 to elect the new pope; they wanted an end to scandals linked to the “Vatican Bank” and wanted the new pope to ensure that it operated only for the purposes for which it was created. Soon after his election, Pope Francis set in motion a process to understand the Vatican finances, including the I.O.R. Then, after considerable reflection on whether to abolish the I.O.R., Francis decided not only to retain it but also to radically reform it together with all Vatican financial operations. He has acted with determination and considerable success to clean up the entire operation of the I.O.R., and this has involved the approval of new legislation in the Vatican City State in accordance with international standards, the closing of many bank accounts and the prosecution of some top I.O.R. managers.

The revised statutes are meant to ensure that the Vatican Bank conducts its business solely for “the works of religion and of charity.”

Today’s publication of the revised statutes is another important step on the path of the I.O.R.’s reform. The Vatican published them together with a chirograph from the pope in which he recalls the I.O.R.’s history and explains the significance of the new statutes. In the chirograph, Francis recalls that his predecessor, Pius XII, established the I.O.R. on Jan. 27, 1942, and absorbed into it the pre-existing “Administration for the Works of Religion,” the origins of which go back to another entity set up by Leo XIII in 1887. He recalls, too, that Pius XII appointed a commission of cardinals to oversee the institute.

He explains that he has revised the I.O.R.’s statutes, which John Paul II had reformulated in 1990, “with the aim of continuing to adapt ever better the structures and the activities of the Institute to the needs of the times, having recourse in particular to the collaboration and responsibility of competent lay Catholics.” He indicated that he wants to keep a close watch over what is happening by announcing that he has renewed the statutes “for an experiment of two years.”

He declares that the purpose of the I.O.R. “is to provide for the custody and the administration of the mobile and immobile goods transferred or entrusted to the same Institute by physical or juridical persons and destined for the works of religion and of charity.” He explains that it has a juridical public personality under canon law and is located in the Vatican City State and regulated by its laws.

The I.O.R. was a cause of major concern to the cardinals when they met in March 2013 to elect the new pope.

Under the new statutes, the I.O.R. has four “organs” of control, the members of which have term limits.

First, there is a five-member commission of cardinals, whose task is to ensure that the institute is “faithful” to the norms of the statutes.

The supervisory council, composed of seven members nominated by the commission of cardinals, “is responsible for the administration and management of the Institute as well as the vigilance and supervision of its activities on the financial, economic and operational fields.”

The fourth organ of control is the directorate, or senior management, which includes a director general and a deputy. The commission of cardinals approves their nomination.

Francis lays down that the I.O.R. will have an “external auditor,” which can be an individual or a firm, nominated by the commission of cardinals.

The importance of the revised statutes is underlined in an article by Andrea Tornielli, the editorial director of Vatican Media, titled “Vatican Bank (IOR): greater fidelity to its original mission.” He explains that the new statutes seek to ensure “the best international standards” in the financial field.

He describes the introduction of the role of the prelate as “one of the most significant novelties” in the revised statutes. He explains that the prelate is “a key figure in maintaining contacts with each member of the I.O.R., thereby guaranteeing the circulation of information and the care of relations.” The prelate “maintains constant exchanges between the administrators and dependents” and promotes “the ethical dimension of their work.” He will also keep the archive of the commission of cardinals.

Mr. Tornielli notes that the operations of the I.O.R. are not only subject to canon law but to the legislation introduced by both Benedict XVI and Pope Francis governing financial transactions, transparency and money laundering. He also draws attention to the fact that the I.O.R. employees are asked to abide by the code of ethics approved by the supervisory council and are to be employees “exclusively” of the I.O.R., without consultancies or other work linked to the institute.

The new statutes come into effect immediately once they are published in L’Osservatore Romano, the Vatican daily.

I first read the caption to say he approved new statues. I was wondering about who are the patron saints of commerce. That would have been more interesting .

1
How can we grieve with funerals on hold?
Valerie Schultz
2
Looking for a good summer read? Check out these books by authors of color.
Vivian Cabrera, Maeve Orlowski-Scherer
3
I am a Black Catholic convert and believe the church must address racism now.
Tevin Williams
4
Joe McCarthy’s Controversial Catholic Faith
Larry Tye
5
What makes us ready to receive the word of God?
Terrance Klein