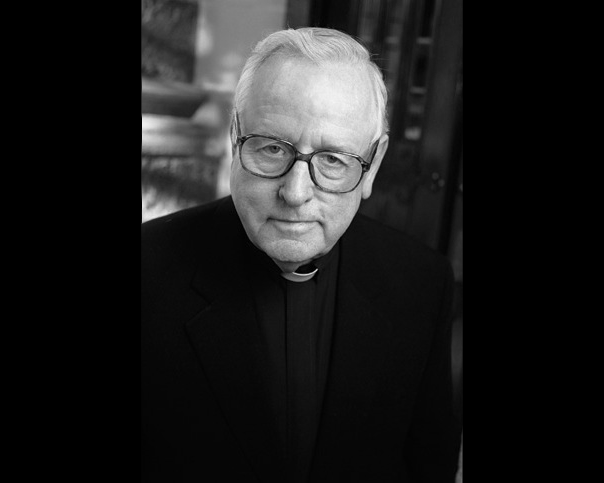 Michael Buckley, S.J. (Photo courtesy of the Society of Jesus)

His funeral will be held on Friday, Aug. 2, at 10 a.m. at the Santa Clara Mission Church on the campus of Santa Clara University.

Father Buckley was well-known for an essay he wrote in the 1970s about the vocation to the priesthood that is widely used in priestly and diaconate formation around the United States. Among its most famous lines are the following:

Is this man weak enough to be a priest? Is this man deficient enough so that he cannot ward off significant suffering from his life, so that he lives with a certain amount of failure, so that he feels what it is to be an average man? Is there any history of confusion, of self-doubt, of interior anguish? Has he had to deal with fear, come to terms with frustrations, or accept deflated expectations? These are critical questions and they probe for weakness. Why weakness? Because, according to Hebrews, it is in this deficiency, in this interior lack, in this weakness, that the efficacy of the ministry and priesthood of Christ lies.

How critically important it is for us to enter into the seriousness of this revelation, of this conjunction between priesthood and weakness, that we dwell upon deficiency as part of our vocation! Otherwise we can secularize our lives into an amalgam of desires and talents; and we can feel our weakness as a threat to our priesthood, as indicative that we should rethink what was previously resolved, as symptomatic that we were never genuinely called, that we do not have the resources to complete what we once thought was our destiny and which once spoke to our generosity and fidelity.

Father Buckley is remembered by many Jesuits for his pioneering leadership of the Jesuit School of Theology at Berkeley, where he served as rector during the theologate’s 1969 move from the rural Alma College to Berkeley’s “Holy Hill” and inclusion in the Graduate Theological Union. He “provided a foundational spirituality for young Jesuits” during that tumultuous time in the Catholic Church, wrote Patrick Howell, S.J., in his 2019 book Great Risks Had To Be Taken: The Jesuit Response to the Second Vatican Council, 1958–2018.

Michael Buckley, S.J., combined scholarship and spirituality with a warm and life-affirming humanity as few others could.

Drew Christensen, S.J., a former editor in chief at America, was a colleague of Father Buckley for many years and remembered him for his intellectual rigor in an email to America:

One of my favorite stories of Michael Buckley concerns his book At the Origins of Modern Atheism. At a meeting in Rome, he presented a copy of the book to Pope John Paul II. The pope asked him, “Who was at the origins of modern atheism?”

Mike answered, “the theologians.” His argument was that the 17th-century theologians had undermined theology by relying too heavily on natural philosophy, that is, the science of the day. When the underlying science proved wrong, the credibility of theology was undercut. Following his mentor Richard McKeon, Mike believed all theological texts should be written with methodological rigor. He expected his students to find that same strength of argument in the books they read. At J.S.T.B. [the Jesuit School of Theology at Berkeley] in my time, he pressed students so hard on their control of the text, they called him ‘the prosecuting attorney.’

Thomas Rausch, S.J., emeritus professor of theological studies at Loyola Marymount University in Los Angeles, noted Father Buckley’s spiritual contributions to the Jesuits. “When I remember Michael Buckley, I think with gratitude of his recovery of the directed Ignatian retreat, lost for several centuries, and making it available to young Jesuits in formation,” Father Rausch said by email. “Coming at the end of the turbulent ’60s, few initiatives had greater effect in supporting their vocations. ‘Buckles,’ as we called him, combined scholarship and spirituality with a warm and life-affirming humanity as few others could. Scholar, mentor, guide and friend, he was one of the giants of his time.”

Father Buckley was the president of the Catholic Theological Society of America from 1991 to 1992 and was the executive director of the Committee on Doctrine and Pastoral Research and Practices at the United States Conference of Catholic Bishops in the mid-1980s. His appointment to that post was contested by some Catholics because Father Buckley had signed a public objection to a 1977 Vatican statement on the church’s opposition to the ordination of women to the priesthood.

For a number of years Father Buckley organized the program for the yearly retreat of California’s Catholic bishops. He was also a theological adviser to the Pontifical Commission on Religious Life in the United States, chaired by Archbishop John R. Quinn of San Francisco.

The Madman And the Crowd: For the new atheists, God is not worth a decent argument.
Michael J. Buckley

Father Buckley received his B.A. and M.A. in philosophy from Gonzaga University and his Ph.D. in theology from the University of Chicago.

He was a frequent contributor to America and also published widely elsewhere; his books included At the Origins of Modern Atheism (Yale, 1987), Papal Primacy and the Episcopate (Herder, 1998) and The Catholic University as Promise and Project (Georgetown, 1998).

May he rest in peace and rise in glory.

Let's hope no disgusting facts emerge about him as they have about Father Richard John Neuhaus and Avery Cardinal Dulles.

Eternal rest grant unto him O Lord and let your perpetual light shine upon Fr Mike.

Thanks to Fr. Buckley - in 1977, the faculty from the Jesuit School of Theology in Berkeley, including Michael J. Buckley SJ, placed an open letter in he Los Angeles Times dissenting from the Vatican's 1976 opinion that women could never be priests. He did this even though it was possible it would blight his career. He seemed like a good and brave person.

Crystal, I am his niece and can tell you he never complained, but did suffer for that letter. He was a man full of integrity. Thank you for your nice comment.

Thanks, Mary. I've read some of his articles on Ignatian spirituality too - he was a gifted person :)

Jim, thanks for a wonderful memorial. Especially for the citation about weakness -- a magnificent reminder. And reminded me of Lynch's focus on irony. Ironic that the priest must be weak, and always aware of weakness, to mediate the reality of Christ who saved by weakness.