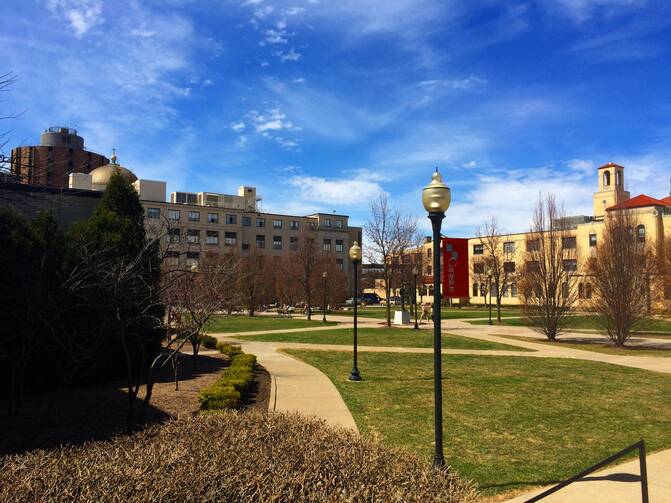 The Buffalo community answered the call when over 100 asylum seekers from Africa arrived at the city’s Vive Shelter in mid-June, pushing it past capacity. The group reflects a growing phenomenon at the U.S.-Mexico border: applicants from outside Latin America, particularly from the Middle East and Africa.

Among the Buffalo institutions that offered to lend a hand was Canisius College, a Jesuit school a few miles down the road from Vive. Making room for the new arrivals, 13 asylum seekers who had been at Vive for up to a year moved to Canisius residence halls on June 23 for three weeks before moving into apartments of their own or returning to the shelter.

“Canisius has been fantastic,” said Brian, one of the guests who asked not to be identified by his real name. “They gave us everything we needed.”

Vive is a homeless shelter for those who are seeking to make a refugee claim in Canada or asylum protection in the United States. In a July 8 press conference held by Jericho Road Community Health Center, which runs the Vive program, founder and chief executive Myron Glick explained that over 100 Congolese asylum seekers, mostly families, had suddenly arrived at the center “and almost overwhelmed our capacity to help.”

“Canisius has been fantastic. They gave us everything we needed.”

The Congolese migrants had been released from a detention center in San Antonio. They were a part of a larger group of African migrants who had been detained at the southern border since October, he said.

Their journey has not been easy. “Most flew to Brazil,” Dr. Glick said, “and then traveled on foot and by bus all the way from Brazil to Texas, a journey that was over 2,500 miles, through jungles, deserts, across rivers and at great personal hardship.” According to Dr. Glick, the journey took anywhere from three to nine months.

A record number of African migrants are coming through the southern U.S. border, many of them from the Democratic Republic of the Congo, according to the Border Patrol. The Associated Press reported in June that migrants are fleeing violence in that country at a rate of 311 per day.

For asylum seekers, there is no doubt about the decision to leave their home country. “Everybody who leaves a place where they’re unsafe knows that they have to leave,” said Brian, who came to the United States from Uganda last year. “It’s just a matter of getting the chance. When you have the chance, then you leave.”

"Think creatively about what you can offer, even if it may seem small.”

Brian said his journey became even more difficult after he lost all of his belongings while traveling by Greyhound bus.

Instead of sending some of the new arrivals to Canisius, Vive asked the college to take some of those who had been at the shelter the longest so they would get a break from the spartan surroundings. Brian stayed at Canisius with 12 other men, all in various stages of applying for asylum. Sarah Signorino, the college’s director of mission and identity, organized volunteers from the school and surrounding neighborhood to bring lunch and dinner for the refugees. Brian compared the stay to “a five-star hotel.”

“Canisius is trying to look strategically at how we can best use our resources for the needs of our community,” said Ms. Signorino. “We weren’t just saying, ‘Donate money, donate money.’ We were saying, ‘Come eat with our guests that are here.’”

“Buffalo over the last several years has been very welcoming to refugees,” said John Hurley, the president of Canisius College, in an interview with America. “The new Americans in our midst bring vitality, diversity and a lot of positive things to neighborhoods all across the city.

“We’ve come to see that welcoming the stranger can be a good thing,” Mr. Hurley said. “It’s caused us to recall the roots of Buffalo’s founding as a welcoming place for Irish, Italian, German immigrants.”

“I’ve come to see that this whole issue is an incredibly complex, human issue. And we should do what we can to ease that as much as we can.”

Mr. Hurley saw the college’s hospitality to the asylum seekers as a way to apply the apostolic priorities of the Society of Jesus “and the obligation to walk with the marginalized and the excluded.”

President Trump’s racist comments about four members of Congress hung over the conversations about the college’s efforts for asylum seekers. Brian described himself as disappointed and saddened by them.

Mr. Hurley said that considering the Trump administration’s hostile rhetoric toward migrants and its new policies making it more difficult to seek asylum, “the idea that simply providing shelter is going to solve all their problems—I’ve come to see that that’s unrealistic.”

“They may be out of the immediate line of fire,” he said, “but they’re not safe here, and their situation is not resolved.

I was arrested protesting Trump’s border policies. The Gospel calls us to do more.
William Critchley-Menor, S.J.

“They’ve still got to find a job, make some money and find a place to live where they’re going to be free from harassment and discrimination,” Mr. Hurley said. “I’ve come to see that this whole issue is an incredibly complex, human issue. And we should do what we can to ease that as much as we can.”

“Consider the resources that you have and offer what you’re able,” said Ms. Signorino when asked what other Jesuit colleges can learn from Canisius’ experience. “Maybe that’s just housing people for a week to give them a respite. Maybe that’s offering [meals] to the caregivers who are overburdened…. Think creatively about what you can offer, even if it may seem small.”

Mr. Hurley compared the responses to the arrival of asylum seekers to the parable of the Good Samaritan. “The priest and the Levite probably walked down the street and said, ‘What’s gonna happen to me if I get involved with this guy?’ As Dr. Martin Luther King Jr. pointed out, the Samaritan said, ‘What’s going to happen to him if I don’t get involved?’”

Truly for the greater glory of God.