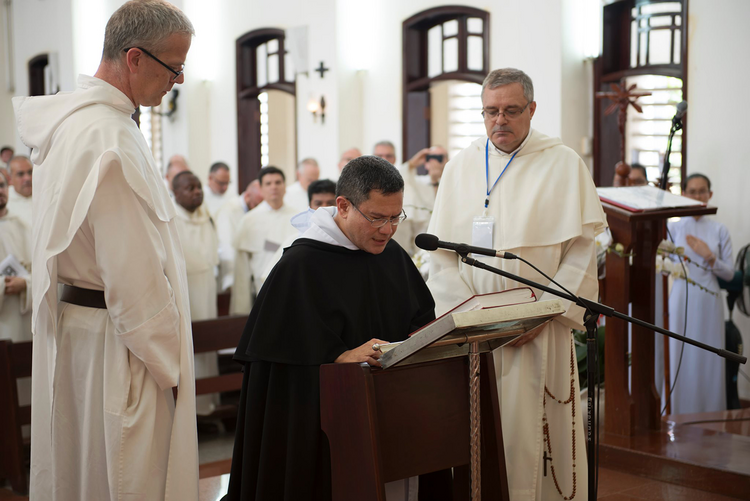 Courtesy of the Order of Preachers

Father Timoner, a native of the Philippines, is the 88th superior of the Order of Preachers, founded by St. Dominic Guzman, and the first Asian to lead the order.

Elected July 13 during the order's general chapter in Bien Hoa, Father Timoner told his Dominican brothers that he initially did not want to accept the election, but he was encouraged by the others, who reminded him the vote was proceeded by the invocation of the Holy Spirit, according to an article on the Dominican's chapter website.

The Catholic Church today, it seems, "needs a Francis and a Dominic," he said after the election. "There is a need for a new evangelization, and we are all called to do precisely that."

He also encouraged members of the order to talk with one another in order to overcome internal differences and strengthen their unity so their mission would be more effective.

English Dominican Father Timothy Radcliffe had preached at the Mass before the election, encouraging the Dominicans to rely on the Holy Spirit for inspiration in voting and in guiding the next master general.

The new superior, Father Radcliffe said, "need not to be the bravest person who will liberate us. It is the Holy Spirit who will do that and not the master of the order! His main role is to support the provinces and the brethren to whom the Spirit calls to some courageous mission."

"There will always be people who will try to squash some new initiative because it is risky; it might not work; we are already doing too much; it might be misunderstood. It's not safe," he said. "The master's role is to resist that fear. We have hundreds of wonderful young friars who want to do something a little crazy. We must be realistic but never discourage them. The first thing that the angels said to the women after the resurrection was: 'Do not be afraid.'"

One of the first duties of the superior is to ensure peace within the order, Father Radcliffe said. "That peace is destroyed when people are locked in small rooms of ideology. All over the world, people are retreating into small rooms and locking the doors. Conservative or liberal, traditionalist or progressive. The algorithms of the media lock people into bubbles in which we speak to the likeminded. The good and the bad; us and them."

Father Timoner was born Jan. 26, 1968, in Daet, the capital of the Philippines' Camarines Norte province. At the time of his election, he was the assistant to the master general for Asia-Pacific. Previously he was Dominican provincial for the Philippines.

He obtained his philosophy degree from the Philippine Dominican Center of International Studies and his theology degree from the University of Santo Tomas in Manila. He was ordained a priest in 1995.

In 2004, he earned his licentiate in theology at the Catholic University of Nijmegen in the Netherlands.

In 2014, Pope Francis named him a member of the International Theological Commission, a panel of theologians who do research for the Congregation for the Doctrine of the Faith.

Congratulations, Fr. Timoner! The Dominicans are a great order and a gift to the Church.