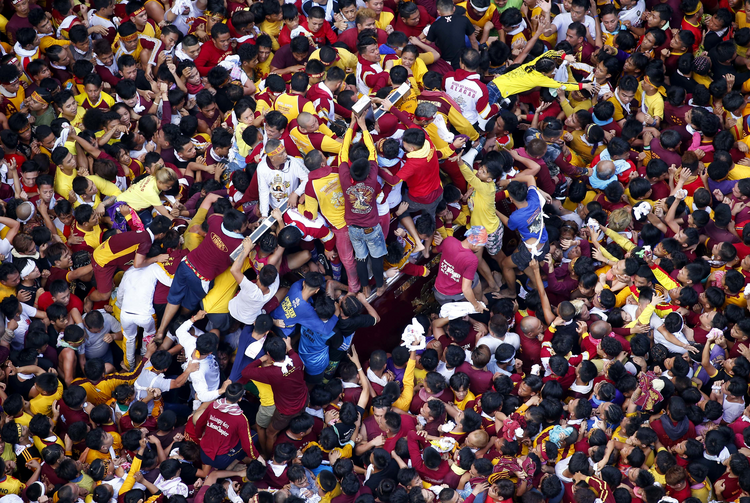 Filipino Roman Catholic devotees clamber to kiss and rub with towels the image of the Black Nazarene in a raucous procession to celebrate its feast day Wednesday, Jan. 9, 2019, in Manila, Philippines. Tens of thousands of mostly barefoot Filipino Catholics joined the annual procession of a centuries-old statue of Jesus Christ to celebrate the Feast of the Black Nazarene which usually ends before dawn the next day. (AP Photo/Bullit Marquez)

MANILA, Philippines (AP) — A mammoth crowd of mostly barefoot Filipino Catholics joined a raucous procession Wednesday of a centuries-old black statue of Jesus Christ despite terrorism fears and amid the president's attacks on the Catholic faith.

Police said they have not monitored any specific threat but that they deployed more than 9,000 police and troops, including bomb squads backed by a surveillance helicopter, to secure the annual procession of the wooden Black Nazarene along Manila's streets. Police were expecting up to 5 million people to join the dawn-to-midnight procession.

More than 800,000 devotees attended a Mass and the first few hours of the procession, national police Director General Oscar Albayalde said. Tens of thousands of others joined in and went as one of Asia's biggest religious events unfolded.

Authorities imposed a gun and liquor ban and cellphone signals were jammed in the vicinity of the procession.

Authorities imposed a gun and liquor ban and cellphone signals were jammed in the vicinity of the procession. Flights over the area were prohibited along with sailing in nearby Manila Bay and along a key river where special police and coast guard forces guarded bridges that the mass of devotees passed through.

Despite the threats and the tropical heat, mobs of devotees in maroon shirts dangerously squeezed their way into the tight pack of humanity around a carriage carrying the life-size statue of Christ. They threw small towels at volunteers on the carriage, which was being pulled by ropes, to wipe parts of the cross and the statue in the belief that the Nazarene's powers cure ailments and ensure good health and a better life.

"I'm praying so I can walk again and be cured of depression," said Pochi Maximo, who held on to a wheeled walking device as she waited along a road with her daughter for the procession to pass.

The 58-year-old housewife said she has joined the religious gathering since childhood as part of a family tradition and persisted to be at Wednesday's procession despite debilitating knee and spine ailments that were diagnosed last year, along with diabetes, that drove her into pits of depression.

Another devotee, Ryan de Vera, a 29-year-old former finance officer at a local bank, said he squeezed his way through the crowd to touch the hand of the Black Nazarene, which he credited for the recovery of his father from prostate cancer. After the dangerous feat, he was pushed uncontrollably aside by the mass of humanity to a roadside, where his left foot sustained a deep wound caused by a sharp metal piece debris.

After getting treatment at a first-aid station, he limped back to the crowd, still barefoot and smiling. By nightfall, more than 1,000 devotees had been treated by Red Cross volunteers for minor injuries, exhaustion and high blood pressure.

A tourist from Denmark, Jens Mikhelsen, said the intense religious outpouring was important because it drew Filipino Catholics closer to their faith and sparked hope.

A tourist from Denmark, Jens Mikhelsen, said the intense religious outpouring was important because it drew Filipino Catholics closer to their faith and sparked hope.

"It's very, very impressive ... It's a bit away from my way of thinking but I respect the people," said the 75-year-old engineer, who is a Protestant.

Such religious passion was under the spotlight amid President Rodrigo Duterte's stepped up attacks on the Catholic church, faith and bishops, who have criticized the thousands of killings under his anti-drug crackdown. In June, Duterte sparked outrage among many Catholics when he called God "stupid" and later questioned the basic tenets of the Catholic faith. He offered to immediately resign if anybody can prove that God exists.

Crowned with thorns and bearing a cross, the Nazarene statue is believed to have been brought from Mexico to Manila on a galleon in 1606 by Spanish missionaries. The ship that carried it caught fire, but the charred statue survived. Some believe the statue's endurance, from fires and earthquakes through the centuries and intense bombings during World War II, is a testament to its powers.

The spectacle reflects the unique brand of Catholicism, which includes folk superstitions, in Asia's largest Catholic nation. Dozens of Filipinos have themselves nailed to crosses on Good Friday in another tradition to emulate Christ's suffering that draws huge crowds and tourists each year.

Police forces were placed on full alert ahead of Wednesday's religious gathering amid military offensives against Muslim militants aligned with the Islamic State group who have been blamed for a spate of bombings and other attacks in the volatile south.

Last week, suspected Muslim militants remotely detonated a bomb that killed two people and wounded about 30 others near the entrance of a shopping mall in southern Cotabato city as people did last-minute shopping ahead of New Year's Eve celebrations.