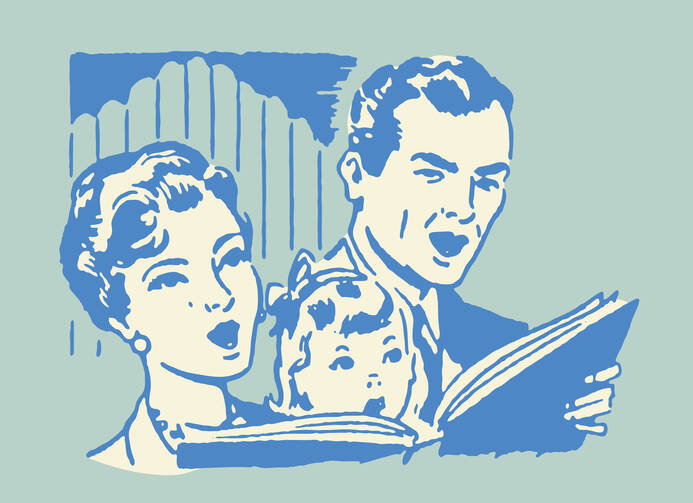 America received more responses than usual to our survey about favorite hymns.

“‘How Can I Keep From Singing?’ is a hymn that has helped me express my joy in the better days of my life and gotten me safely through the darker ones because of its honest hopefulness,” wrote Brianna Goetzke of Washington, D.C. “It is a versatile piece that works beautifully for both congregational song and individual reflection. It speaks to that essential intuition that defies logic—I don’t know why, but I know God is here.”

As for her “guilty pleasure” hymn, Ms. Goetzke said she favors “all of the ‘overdone’ ones—‘On Eagle’s Wings,’ ‘Pescador de Hombres,’ ‘You Are Mine,’ etc. They’re overdone for a reason! They are so meaningful.”

While a number of readers singled out “On Eagle’s Wings” as their favorite hymn, others said it was their least favorite.

Leonard Go of Washington, D.C., wrote that Van Morrison’s “Have I Told You Lately” “should be a hymn but isn’t.”

Asked to name a least favorite hymn, many readers mentioned “Lord of the Dance.” A few said “Where Charity and Love Prevail.” Others cited “Amazing Grace” and “America the Beautiful.”

Another popular un-favorite was “Battle Hymn of the Republic.” Kathleen Packard of Marion, Mass., said the song is “not at all my understanding of God’s glory.” Nancy Herzig summed up the sentiment with her comment: “Any patriotic hymn—not appropriate for church.”

Norma Castilho of South Gate, Calif., does not have a least favorite hymn. “Each one has its beauty,” she wrote.

(Survey results are based on 240 responses.)

A few come to mind from my urban experience: Lead Me Guide Me, Order My Steps in Your Word Dear Lord, How Excellent, and many more.

Pope Francis releases new letter on liturgy: Catholics need a better understanding of Vatican II’s reforms
The “sense of mystery” Catholics should experience at Mass is not one prompted by Latin or by “creative” elements added to the celebration, but by an awareness of sacrifice of Christ and his real presence in the Eucharist, the pope said.
Cindy Wooden - Catholic News ServiceJune 29, 2022