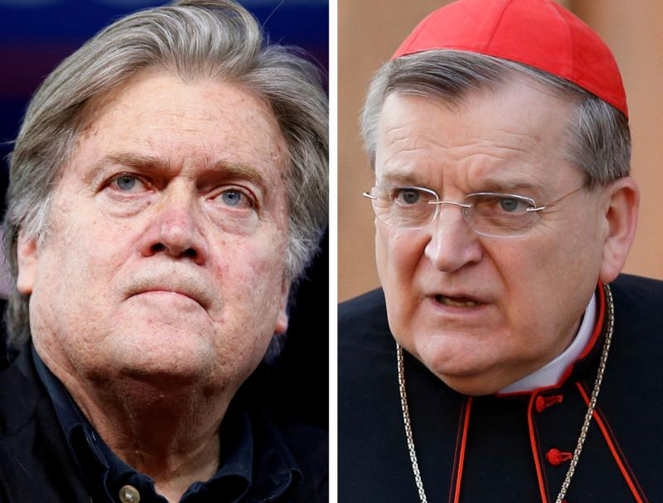 Stephen Bannon, former White House chief strategist, and U.S. Cardinal Raymond L. Burke are seen in this composite photo. The Italian ministry for culture revoked a license it granted to the Dignitatis Humanae Institute to manage a state-owned historic monument south of Rome, citing irregularities in the bidding process and a breach of contract. Cardinal Burke is honorary president of the institute and Bannon is a patron and member of the board of trustees. (CNS photo/Paul Haring and Joshua Roberts, Reuters) See BANNON-ITALY-INSTITUTE June 3, 2019.

ROME (CNS) -- The Italian ministry for culture has revoked a license it granted to the Dignitatis Humanae Institute to manage a state-owned historic monument south of Rome, citing irregularities in the bidding process and a breach of contract.

The former Carthusian monastery of Trisulti was being used as the headquarters of the institute, which was founded by Benjamin Harnwell in 2008 to promote the respect of human dignity.

U.S. Cardinal Raymond L. Burke is the honorary president of the institute, 11 other cardinals make up the institute's advisory board and Steve Bannon, former chief strategist at the White House, is a patron and member of the board of trustees.

Cardinal Burke: It is ‘licit’ to call for the resignation of Pope Francis
Gerard O’Connell

The institute said it signed the 19-year lease for the abbey in February 2018 and that it had been formally handed over after the legal papers were signed in January.

However, the culture ministry announced May 31 that it found evidence of a number of contractual obligations being violated and other factors that support annulling the permit. The violations were discovered during an investigation into the authorization of the permit, which had been granted by the previous government administration.

The ministry's undersecretary, Gianluca Vacca, said in a press release that the inquiry discovered improper procedures in the bidding process, including that the institute did not have the required juridical status when it filed its bid and it lacked the necessary documentation, knowledge and experience in protecting and promoting cultural heritage sites.

Vacca also said investigators also found that the institute had failed to fulfill its obligations in paying its annual leasing fee, which according the ministry documents, was set at 100,000 euro (US$112,000) a year, and in providing the necessary "ordinary and extraordinary maintenance" and security of the site.

Harnwell told The Washington Post in a statement May 31 that the institute would fight against the decision with "every resource at its disposal no matter how many years it takes."

"The Ministry for Culture might be prepared to surrender to every whim of the extreme left -- the (Human Dignity Institute) will never do so," he said, adding that the government move was "nothing more than the braying of the cultural Marxist left against the defense of Western Civilization."

Also according to The Washington Post, Bannon said, "The fight for Trisulti is a microcosm of the fight for the Judeo-Christian West."

Why Pope Francis hasn’t excommunicated Raymond Burke is beyond my comprehension! Could it be that Francis is patiently waiting for Burke to excommunicate himself?

Cardinal Burke does not want to give up his Cappa Magna