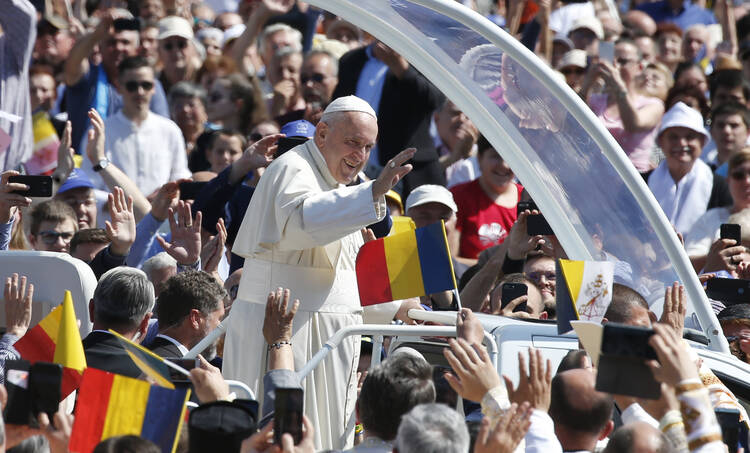 Pope Francis greets the crowd before celebrating a Divine Liturgy and the beatification of seven martyred bishops of the Eastern-rite Romanian Catholic Church at Liberty Field in Blaj, Romania, June 2, 2019. (CNS photo/Paul Haring)

On his last day in Romania, Pope Francis presided over a joyful Divine Liturgy in the small town of Blaj, the heartland of the country’s Greek-Catholic Church, on Sunday June 2, where he declared “blessed” seven of its bishops, including one cardinal. All seven had died a martyr’s death in the decades following the suppression of the Eastern-rite Romanian Catholic Church in 1948.

The vast crowd applauded enthusiastically after Pope Francis beatified the seven during the enchanting, Eastern liturgy of this church. It was a moment of glory for the members of this church in Romania and in its diaspora, who had suffered so greatly in the last century under a communist persecution that sought to obliterate them.

Referring to the seven martyr bishops, Pope Francis recalled that “in the face of fierce opposition from the regime, they demonstrated an exemplary faith and love for their people. With great courage and interior fortitude, they accepted harsh imprisonment and every kind of mistreatment, in order not to deny their fidelity to their beloved church.”

These “pastors and martyrs for the faith,” Pope Francis said, “re-appropriated and handed down to the Romanian people a precious legacy that we can sum up in two words: freedom and mercy.”

These “pastors and martyrs for the faith,” Pope Francis said, “re-appropriated and handed down to the Romanian people a precious legacy that we can sum up in two words: freedom and mercy.”

Immediately after the pope pronounced their beatification and the choir stopped singing, Cardinal Lucian Muresan, the 88-year old major archbishop of this diocese, spoke and drew great applause when he expressed his church’s gratitude to the pope for coming, presiding at their liturgy and beatifying the bishop martyrs “who preferred death rather than betray their Catholic faith.” He recalled how Pius XII said he wanted to “kiss the chains” of those unjustly imprisoned for their faith in Romania.

Today, the cardinal said, “that wish has become reality: Peter is here!” The congregation responded with thunderous applause. “Peter is here, to confirm us in the faith,” he added, seeking to control his feelings and drawing another round of applause.

The cardinal said that Pope Francis had also come to call this “small flock situated in the existential peripheries” to an authentic “purification of memory” and to prayer and action in favor of the poor and those on the margins of society.

The sun shone brightly as Pope Francis presided over the liturgy in the Field of Liberty where in 1848 Romanians gathered to call for the recognition of the country as a nation. Among those present was the country’s president and the Orthodox Metropolitan from this region. Noteworthy too, among the crowd that shielded from the sun under umbrellas, were many Greek Catholic priests with their wives and children. Romanian Prime Minister Viorica Dancila also attended.

According to tradition, St. Andrew, the brother of Peter, brought the Gospel to Romania. After the Great Western Schism in 1054, the Christians in this land became part of the Orthodox Church linked to Constantinople. At the synod of Alba Iulia in 1700, however, a part of the Romanian Orthodox Church formally recognized the primacy of the Bishop of Rome and other key points of Catholic doctrine, and, keeping their Byzantine liturgy and Easter-rite traditions, became the Greek-Catholic church.

“These lands know well how greatly people suffer when an ideology or a regime takes over, setting itself up as a rule for the very life and faith of people.”

In 1948 after this land had fallen under communist rule, the Greek-Catholic church was declared illegal by decree of Stalin (who wanted it to rejoin the Orthodox Church) and in the following decades its bishops, including the seven Pope Francis beatified, and 600 priests were imprisoned, its churches, schools and other institutions as well as its cemeteries were expropriated and given either to the Orthodox church or else taken by the state. he Greek-Catholic church regained its legal existence only after the fall of the communist regime in 1989, and today has some 737,900 members.

Pope Francis no doubt had all this history in mind when, in his homily, commenting on how Jesus caused much controversy when he cured a man born blind on the sabbath, he told the 80,000 faithful present and the millions of Greek Catholics abroad following on the social media, “how hard it is to understand the actions and priorities of Jesus, who brings someone from the periphery into the center.”

He said, “We see the resistance and the hostility that can arise in the human heart when, instead of putting people at the center, we put special interests, labels, theories, abstractions and ideologies, which manage only to blind everything around them.”

He told this crowd, “Far from hiding himself behind inaction or ideological abstractions, the Lord looks people in the eye. He sees their hurts and their history. He goes out to meet them and he does not let himself be sidetracked by discussions that fail to prioritize and put at the center what is really important.”

Referring to what happened under communist rule in Romania, Pope Francis said, “These lands know well how greatly people suffer when an ideology or a regime takes over, setting itself up as a rule for the very life and faith of people, diminishing and even eliminating their ability to make decisions, their freedom and their room for creativity. You were forced to endure a way of thinking and acting that showed contempt for others and led to the expulsion and killing of the defenseless and the silencing of dissenting voices.”

The seven new “blessed” he said, “endured suffering and gave their lives to oppose an illiberal ideological system that oppressed the fundamental rights of the human person. In that tragic period the life of the Catholic community was put to a harsh test by a dictatorial and atheistic regime. All the bishops and faithful of the Greek-Catholic Church and those of the Latin-rite Catholic Church were persecuted and imprisoned.”

The seven also left “a spiritual legacy” of mercy, he said. “Their tenacity in professing fidelity to Christ was matched by their readiness to suffer martyrdom without showing hatred towards their persecutors and indeed responding to them with great meekness.”

He told the crowd, “The mercy they showed to their tormentors is a prophetic message, for it invites everyone today to conquer anger and resentment by love and forgiveness and to live the Christian faith with consistency and courage.”

Then turning to the present-day Romania, Pope Francis noted that “new ideologies” are appearing “that quietly attempt to assert themselves and to uproot our peoples from their richest cultural and religious traditions.”

They appear in “forms of ideological colonization that devalue the person, life, marriage and the family, and above all, with alienating proposals as atheistic as those of the past, harm our young people and children, leaving them without roots from which they can grow.” The pope added that as a result of these, “people are led to take advantage of others and treat them as mere objects.”

Then, in what appeared to be an allusion to the rise of nationalisms in the region, he counselled them to be on their guard against “those voices” that “by sowing fear and division, seek to cancel and bury the best that the history of these lands have bequeathed to you.”

He encouraged them “to bring the light of the Gospel to our contemporaries and to continue, like the seven new “blessed,” to resist these new ideologies now springing up and “be witnesses of freedom and mercy, allowing fraternity and dialogue to prevail over divisions, and fostering the fraternity of blood that arose in the period of suffering, when Christians, historically divided, drew closer and more united to one another.”

At the end of the liturgy, Pope Francis told the vast crowd, “Here in Blaj, the land of martyrdom, freedom and mercy, I pay tribute to you, the sons and daughters of the Greek-Catholic church, who for three centuries have borne witness to your faith with apostolic zeal.” He added, “I thank the Lord for giving me the opportunity to pray with you and to encourage your commitment to evangelization and your witness of charity.”

The congregation’s applause was sustained at the end of the Divine Liturgy, even as the choir sang, expressing how greatly they appreciated that the Successor of Peter had come here for the first time in history and recognized their sufferings and their great fidelity and indestructible faith.

I did not know this history. God bless our dear Pope, who continues to bring attention to those on the periphery, and reminds us of their strength and courage.

Communists were FAR WORSE than Nazis when it comes to killing & murder and hatred of Christians. Evil Leftists hate Christ.

This is a ridiculous comparison often made by people who lean heavily to the right and refuse to accept the pure evil of racist nationalism found in other racist , xenophobic and right wing movements including the ones gaining traction today in the West. Communists were often enough murderous but to call them worse than Nazis who practiced and preached genocide, an extreme form of nationalism reveals a lot about the person making that comparison, Read here https://medium.com/@Jernfrost/why-nazism-was-worse-than-communism-fad2c43e328e

This is a ridiculous comparison often made by people who lean heavily to the right and refuse to accept the pure evil of racist nationalism found in other racist , xenophobic and right wing movements including the ones gaining traction today in the West. Communists were often enough murderous but to call them worse than Nazis who practiced and preached genocide, an extreme form of nationalism reveals a lot about the person making that comparison, Read here https://medium.com/@Jernfrost/why-nazism-was-worse-than-communism-fad2c43e328e