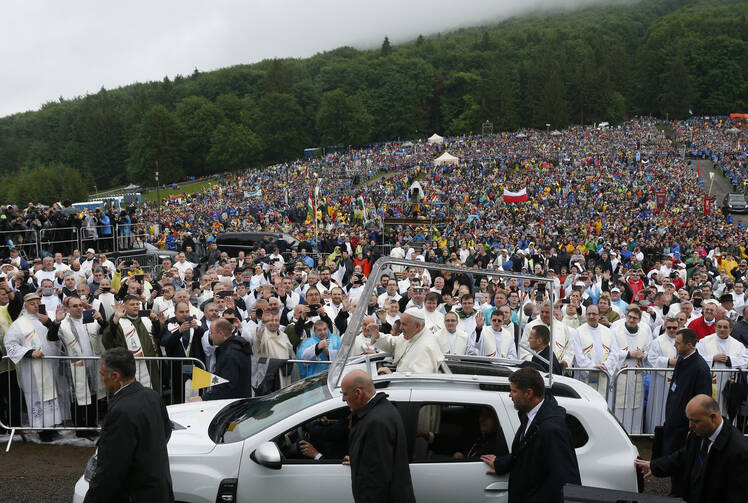 Pope Francis brought immense joy to some 100,000 pilgrims—most of them of Hungarian origin, when he arrived at the famous 16th century Marian shrine of Șumuleu-Ciuc in Transylvania, on Saturday morning, June 1, to celebrate an open-air Mass.

“Complicated and sorrow-filled situations from the past must not be forgotten or denied,” he told the assembled during his homily, “yet neither must they be an obstacle or an excuse standing in the way of our desire to live together as brothers and sisters.” To come here on pilgrimage, he said, “is to feel called and compelled to journey together, asking the Lord for the grace to change past and present resentments and mistrust into new opportunities for fellowship.”

“It means leaving behind our security and comfort and setting out for a new land that the Lord wants to give us,” the pope said. “It means daring to discover and communicate the ‘mystique’ of living together and not being afraid to mingle, to embrace and to support one another.”

“Complicated and sorrow-filled situations from the past must not be forgotten or denied, yet neither must they be an obstacle standing in the way of our desire to live together as brothers and sisters.”

The people attending raised shouts of joy and applauded the first-ever pope to visit here. They knew that like them he had defied inclement weather conditions to do so. He originally planned to fly from Bucharest to Bacau, but his plane had to be diverted to Transylvania airport because of thunderstorms and he had to drive more than 100 miles by car from the airport, instead of taking a helicopter, to reach this shrine in the midst of the Carpathian mountains that Hungarians call Csíksomlyó. To their great joy too the rain stopped and the fog lifted as Pope Francis arrived for this historic event.

The shrine, which is a center of pilgrimage especially for Hungarian Catholics, was built to commemorate the victory in battle of the local Catholic population of Hungarian origin in 1567 against efforts to get them to abandon their Catholic faith and embrace Protestantism. At that time, Transylvania was part of the Kingdom of Hungary, but after World War I it became part of Romania. A leaflet distributed to journalists summed it all up: “Hungarian Catholics 1,000 years in Transylvania, 100 in Romania.”

Today, the majority of the local population is of Hungarian extraction—as are the majority of the Latin-rite Catholics in Romania—and they came here for this festive occasion. Thousands of pilgrims, many in their traditional national dress, came by buses and trains from Hungary and from Poland to pray with the pope as did the Catholic bishops of Hungary. They were joined by Hungarian President Janos Ader and the Prime Minister of Romania Viorica Dăncilă.

Pope Francis celebrated Mass in Latin, with prayers in Romanian, Hungarian and Polish, and in his homily—which he delivered in Italian but was then read in Romanian and Hungarian—he encouraged pilgrims not just to look to the past and prayed to Our Lady to teach all the believers of this land and all pilgrims “the art of weaving the threads of the future.”

He expressed his joy and thanks to God at being able to join them “in this beloved Marian shrine, so rich in history and faith.” Then, seeking to overcome the tensions that exist within the Catholic community due to their ethnic roots and different rites, Francis told them, “We have come here as children to meet our Mother and to acknowledge that we are all brothers and sisters.”

To go on pilgrimage, the pope said, “is to participate in that somewhat chaotic sea of people that can give us a genuine experience of fraternity, to be part of a caravan that can together, in solidarity, create history.”

He said, “Shrines are like ‘sacraments’ of a church that is a field hospital: they keep alive the memory of God’s faithful people who, in the midst of tribulation, continue to seek the source of living water that renews our hope.” Shrines are “places of festivity and celebration, of tears and supplication,” the pope said. “We come to the feet of our Mother, with few words, to let her gaze upon us,” he said, “and with that gaze bring us to Jesus.”

Pope Francis recalled that every year on the Saturday before Pentecost believers come on pilgrimage to Șumuleu-Ciucto honor the vow made by their ancestors for winning the battle to keep their faith and to strengthen their own “faith in God and devotion to Our Lady, before her monumental wooden statue.”

He described this annual pilgrimage as “part of the heritage of Transylvania, but at the same time it honors Romanian and Hungarian religious traditions.” Moreover, he said, “the faithful of other confessions take part in it, and it is thus a symbol of dialogue, unity and fraternity.”

Pope Francis told the pilgrims who were listening in silence that this shrine “invites us to rediscover the witness of living faith and hope-filled life.” Indeed, he said, “to go on pilgrimage is to realize that we are in a way returning home as a people, a people whose wealth is seen its myriad faces, cultures, languages and traditions. The holy and faithful people of God who in union with Mary advance on their pilgrim way singing of the Lord’s mercy.”

He told these Romanian and Hungarian Catholics that just as at the wedding feast of Cana in Galilee where Mary interceded with Jesus to perform his first miracle, so too “in every shrine, she watches over us and makes intercession, not only with her Son but also with each of us, asking that we not let ourselves be robbed of our fraternal love by those voices and hurts that provoke division and fragmentation.”

To go on pilgrimage, the pope said, “is to participate in that somewhat chaotic sea of people that can give us a genuine experience of fraternity, to be part of a caravan that can together, in solidarity, create history.”

It means, also “to look not so much at what might have been (and wasn’t), but at everything that awaits us and cannot be put off much longer. It is to believe in the Lord who is coming and even now is in our midst, inspiring and generating solidarity, fraternity and the desire for goodness, truth and justice.”

To go on pilgrimage, the pope said, is “to commit ourselves to ensuring that the stragglers of yesterday can become the protagonists of tomorrow and that today’s protagonists do not become tomorrow’s stragglers. This requires a certain skill, the art of weaving the threads of the future. That is why we are here today, to say together: ‘Mother teach us to weave the future’ and to set out on the paths of reconciliation.”

Pope Francis concluded his homily at this, the most famous Marian shrine of the center-east European region, by telling these Romanian and Hungarian pilgrims, “The Lord does not disappoint those who take a risk.”

Pope Francis at his best - bringing people together for Jesus and Mary, his Mother.