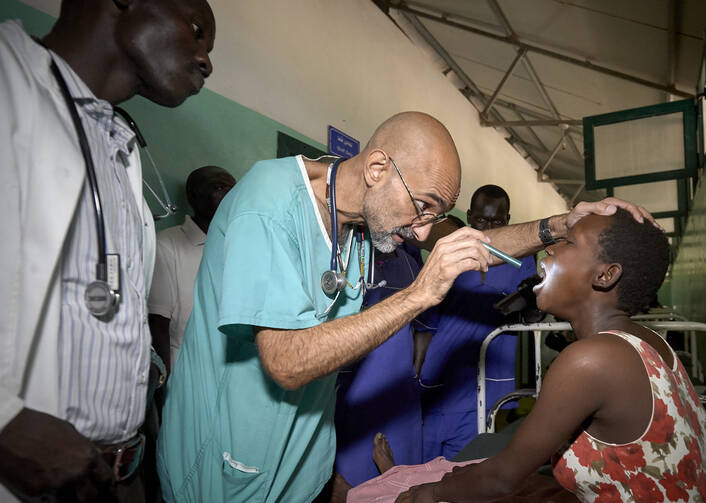 Dr. Tom Catena, a Catholic lay missionary from the United States, examines a patient during rounds in late April at the Mother of Mercy Hospital in Gidel, a village in the Nuba Mountains of Sudan. The Catholic hospital, at which Catena is often the only physician, is the only referral hospital in the war-torn area. (CNS photo/Paul Jeffrey)

In June 2011, violence erupted in Sudan’s remote Nuba Mountains, an area where I had lived and worked as the sole doctor and surgeon for three years. As our situation became increasingly precarious, I was advised by my sponsoring mission to evacuate and return to the United States.

The few religious sisters and priests serving in the region and I did not leave, however, and eight years later, we are still here, despite the violence.

These past eight years have been tremendously difficult. We have taken in thousands of wounded soldiers and civilians, sometimes more than 100 at a time; our hospital has been bombed twice; and the surrounding villages have been bombed on several occasions. Along with the usual seasonal outbreaks of malaria, pneumonia and diarrheal diseases, a major measles epidemic resulted in the death of 30 small children. For months, our wards have housed 450 to 500 patients at a time, all of whom required a high level of care. We tend to our patients mostly with staff who have been trained on the job.

This decision was my “come to Jesus” moment.

My decision to stay and take care of these people was a very simple one: If I left, many men, women and children would certainly die. This decision was my “come to Jesus” moment. I felt that if I left, that would mean that I valued my life over the lives of the people I came to serve. Why do the sisters, priests and I stay and continue to work and live in this difficult environment? We stay simply because we are missionaries and are there to show the love of Christ to his beleaguered children. We stay because we take Christ at his word when he commands us to take care of the “least of these.” These are not mere niceties but actual marching orders.

In our line of work, we witness daily a good share of suffering and pain. It is difficult to keep our spirits up when children are maimed, burned and killed by the effects of an aerial assault by a genocidal regime. On one such occasion, we had to watch three children die because of extensive burns from artillery shelling. On another, we had to amputate both the arms of a boy who was hit by a barrel bomb dropped from 20,000 feet. Another boy had his right arm and leg amputated after a separate bombardment. Many young soldiers have died after we perform prolonged and seemingly successful operations.

We are called to a life of humble service and radical reliance on God but not to perfection.

How can we continue? How do we avoid becoming paralyzed by grief?

In order to better heal those they serve, doctors must first deal with their own suffering
Thomas W. McGovern

Our Catholic faith teaches us that we are not the authors of life and death and that in humility we have to accept that it is not us but our good Lord who gives and sustains life. The people in the Nuba Mountains have an innate sense of the divine that we who live in peaceful, prosperous countries seem to have lost because of our reliance on our own erudition and technology. We are called to a life of humble service and radical reliance on God but not to perfection. We are to allow the immense grace of God to work in our lives. This can be accomplished only when we align our wills with the will of our loving Father.

I recently returned to the United States for a brief visit. I found this trip home unsettling and bewildering: the noise, traffic, Uber, Facebook, Twitter, too much food, spectacular wealth alongside homelessness. I felt the need to get back to the Nuba Mountains and my simple life of service. While in the United States, I talked to students who asked me how to find meaning in life and to live life to its fullest. Jesus gave the best answer to this question: “Go and sell all you own, pick up your cross, and follow me.” 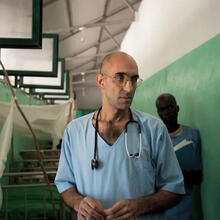 Tom Catena has been a Catholic Medical Mission Board volunteer in the Nuba Mountains of Sudan since 2008. He is the medical director and sole doctor at Mother of Mercy Hospital, which serves nearly 750,000 people.

Everyone read Factfulness, the book by Hans Rosling. In it he relates his experience with medicine in remote areas of the world and what can and cannot be done.

1
The Case For R.C.I.A.
Robert D. Duggan
2
The Case Against R.C.I.A.
Andrew M. Greeley
3
Review: Netflix’s ‘The Sandman’ invites us into gratitude, wonder and the depths of our dreams
Jim McDermott
4
Lessons for evangelization from Britney Spears’ journey with the Catholic Church
Jim McDermott
5
Jo Koy’s ‘Easter Sunday’ magnifies the sacredness of tradition, family and Catholicism in Filipino culture
Melissa Enaje