An interreligious call to protect houses of worship 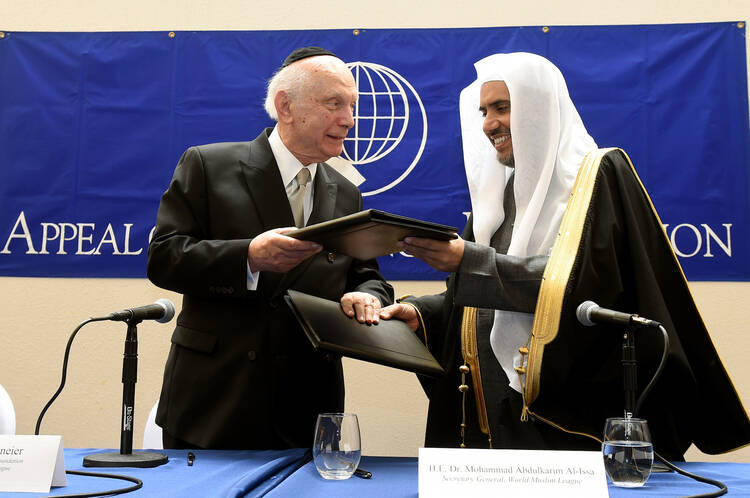 Easter Sunday suicide bomb attacks at three churches and two hotels in Sri Lanka shocked the world. In a mosque in Christchurch, New Zealand, 54 people were gunned down at prayer in March; and one woman was killed and three others wounded when a gunman rampaged at a synagogue near San Diego, Calif., on the last day of Passover.

In response to these acts of extremism, some are determined to offer a counter-image of interreligious relationship and peacemaking. On April 29 in New York, Dr. Mohammad Abdulkarim Al-Issa, secretary general of the Muslim World League, and Rabbi Arthur Schneier, founder and president of the Appeal of Conscience Foundation and senior rabbi at the Park East Synagogue, signed a joint call for greater cooperation among different faiths and for greater urgency in efforts to protect religious sites.

The agreement also encourages renewed efforts at mutual understanding among members of different religious traditions. It asks spiritual leaders, “especially those who preach, teach and lead in prayer, to avoid, abandon and condemn hate speech of any kind, bearing in mind that children are not born with fear or hatred, but can be taught to fear and hate.”

“People should not have to risk their lives when going to pray in churches, mosques, synagogues or temples,” said Rabbi Schneier. “We call on all peoples, nations and their religious and political leaders to work for the protection of all religious sites as places essential to our common humanity and the preservation of faiths and cultures.”

“Houses of worship must be sanctuaries of peace,” said Dr. Al-Issa, a leading global voice for moderate Islam. “No one should be killed for daring only to pray. No one should be threatened for expressing his or her beliefs.”