Pope Francis authorizes the organization of pilgrimages to Medjugorje

Pope Francis authorizes the organization of pilgrimages to Medjugorje 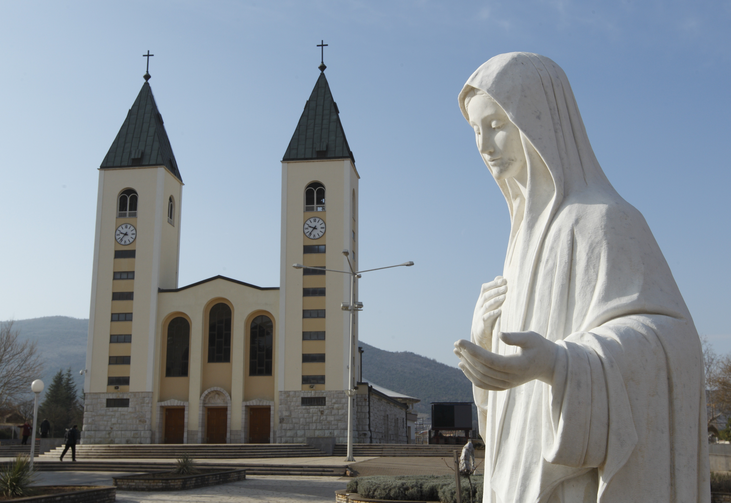 A statue of Mary is seen outside St. James Church in Medjugorje, Bosnia-Herzegovina, in this Feb. 26, 2011, file photo. (CNS photo/Paul Haring)

Pope Francis has authorized the organization of pilgrimages to the Marian shrine of Medjugorje, the Vatican announced today. It made clear, however, that this decision should not be interpreted as an authentication of the events that are said to have happened there: The alleged apparitions of Our Lady in 1981 and thereafter “still need further examination by the church.”

The news that pilgrimages can go ahead but that no conclusion has yet been reached regarding the alleged apparitions and related events was first broken this morning at mass in the parish church of Medjugorje by Bishop Henryk Hoser, the Polish archbishop whom Pope Francis sent there in 2018 to oversee the reality in that parish, and by the Apostolic Nuncio, Luigi Pezzuto.

The Vatican’s interim spokesman, Alessandro Gisotti, confirmed this in a statement released to the press before midday, which emphasized that “it should be avoided that these pilgrimages create confusion or ambiguity from a doctrinal aspect.” He said this should be made clear by “the pastors of whatever grade or order who intend to go to Medjugorje and to celebrate or concelebrate there in a solemn way.”

The alleged apparitions of Our Lady in 1981 and thereafter “still need further examination by the church.”

Moreover, he said, “considering the notable flow of people to Medjugorje and the abundant fruits of graces that have come from them” the disposition announced today “enters into the particular pastoral attention that the Holy Father has decided to give to this reality, aiming at fostering and promoting the fruits of good.”

He explained that as a result of this decree, the Apostolic Visitor “will have greater facility—together with the bishops of these places—of establishing relations with the priests who organize these pilgrimages” to ensure that they are “sound and well prepared,” and to provide them with information to enable them to conduct these pilgrimages in a fruitful way.

A senior Vatican official (who asked not to be named) told America today that Pope Francis took this decision “as a pastor, and from a pastoral perspective,” recognizing the spiritual fruits that pilgrims have gained when they have gone there on pilgrimage. He noted that millions of people have gone on pilgrimage there since 1981, when the apparitions of Our Lady are said to have taken place. He also remarked that historically, when such things happen, it has not been possible (for the Vatican) to stop them, as people derive many spiritual graces from them and continue going. He emphasized, moreover, that as a pastor in Buenos Aires and now as pope, Francis has always given great attention to popular piety and to the importance of pilgrimages for the life of faith.

More than 40 million people from all faiths, including many people with illnesses and problems, have gone on pilgrimage to Medjugorje.

According to various sources, more than 40 million people from all faiths, including many people with illnesses and problems, have gone on pilgrimage to Medjugorje, a small town in Bosnia-Herzegovina, since the first apparitions were said to have taken place there in 1981. Indeed, today more pilgrims go there than to Lourdes, the famous Marian shrine in France, although Fatima still continues to draw the same numbers as before the Medjugorje phenomenon.

Andrea Tornielli, the editor-in-chief of Vatican News, in an editorial published today recalled “the long lines of people going to confession, and the Eucharistic adorations in the evenings at Medjugorje” as evidence of the spiritual impact of these pilgrimages. He recalled that in 2013, Pope Francis told Fr. Alexandre Awi mello, a Mariologist and the Secretary of dicastery for the Laity, Family and life: “I believe that there is grace in Medjugorje. One cannot deny that. People are converted.” At the same time, Tornielli said, the pope “put people on their guard against the protagonism of the seers (of Medjugorje) and the multiplication of messages and secrets” but “he has never discounted the positive fruits of the experience of pilgrimages.”

What's going on with Medjugorje? An interview with a priest assigned to investigate it.
Cindy Wooden - Catholic News Service

For many years, the Vatican’s Congregation for the Doctrine of the Faith has been studying and monitoring closely the doctrinal aspects of the happenings at Medjugorje and the many questions raised by reports coming from the six seers who claim to have received the apparitions of Our Lady in this small village in 1981.

Vatican News today reports that three of these seers, Vicka (who lives in Medjugorje), Marija (who lives in Italy) and Ivan (who lives in the United States), still claim to receive messages, almost daily, from Our Lady, “The Queen of Peace”, always at the same time and in the same place. A fourth seer, Mirjana, claims to receive apparitions on the second day of every month, while two other seers – both men – claim to receive them once a year.

In today’s editorial, Mr. Tornielli pointed out that the decision by Pope Francis “has gone beyond what the Congregation for the Doctrine of the Faith has stated for more than 20 years, when it permitted pilgrimages to Medjugorje but only ‘in a private form.’” He explained that “now dioceses and parishes can organize and guide those pilgrimages which are an expression of the Marian piety of the People of God.”