How the Catholic Church determines a true Marian apparition

How the Catholic Church determines a true Marian apparition 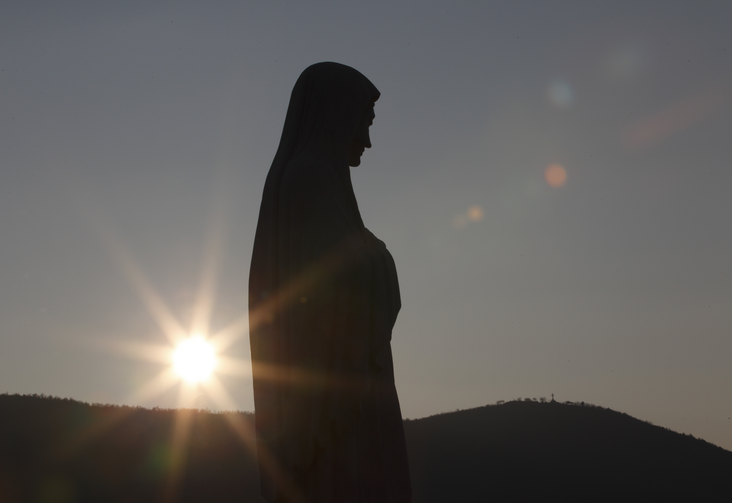 The sun sets behind a statue of Mary on Apparition Hill in Medjugorje, Bosnia-Herzegovina. (CNS photo/Paul Haring)

When it comes to Marian apparitions, the Catholic Church takes a prudent approach that focuses more on the message than the miracle.

Supernatural phenomena, like the alleged miracle of the sun in Fatima, Portugal, nearly 100 years ago, are not the primary factors in determining an apparition is worthy of belief.

In that particular case, the bishop of Leiria—where Fatima is located—deemed the apparitions, but not the miracle of the sun, were worthy of belief. His ruling came in 1930, more than a dozen years after Mary's final apparition to Lucia dos Santos and her cousins, Jacinta and Francisco Marto.

More than 1,500 visions of Mary have been reported around the world, but in the past century, fewer than 20 cases have received church approval as worthy of belief.

The Vatican's "Norms regarding the manner of proceedings in the discernment of presumed apparitions or revelations" were approved by Pope Paul VI in 1978. An official English translation was released in 2011.

Like with Fatima, responsibility for determining an apparition's veracity lies with the local bishop, according to the norms established by the Vatican Congregation for the Doctrine of the Faith.

The process is never brief, with some cases taking hundreds of years. Visionaries and witnesses must be questioned and the fruits of the apparitions, such as conversions, miracles and healings, must be examined.

According to the norms, the local bishop should set up a commission of experts, including theologians, canonists, psychologists and doctors to help him determine the facts, the mental, moral and spiritual wholesomeness and seriousness of the visionary, and whether the messages and testimony are free from theological and doctrinal error.

A bishop can come to one of three conclusions: He can determine the apparition to be true and worthy of belief; he can say it is not true, which leaves open the possibility for an appeal; or he can say that at the moment, he doesn't know and needs more help.

Fatima children are holy because of virtue, not visions of Mary, cardinal says
Junno Arocho Esteves - Catholic News Service
In the last scenario, the investigation is brought to the country's bishops' conference. If that body cannot come to a conclusion, the matter is turned over to the pope, who delegates the doctrinal congregation to step in and give advice or appoint others to investigate.

Still, the Catholic Church does not require the faithful to believe in apparitions, even those recognized by the church.

Church recognition of a private revelation, in essence, is just the church's way of saying the message is not contrary to the faith or morality, it is licit to make the message public "and the faithful are authorized to give to it their prudent adhesion," now-retired Pope Benedict XVI said in his 2010 apostolic exhortation, "Verbum Domini" ("The Word of the Lord").

Where is that letter that Mary gave the children for the Pope to be opened in 1960 (or 1965)? For years it has been quiet round that theme. Was there a letter? Was it opened or not? If not did Fatima turn out to be a scam?

The apparition stories have always been fascinating. The nuns showed movies of Fatima and Lourdes when I was in grade school. There was a grotto beside the Church depicting the very place where Mary appeared to the children. Then there was the fabulous Church in Mexico City, and over the altar was Juan Diego's very cloak imprinted with the vision of the Virgin herself. These stories captured my imagination and the world became a magical God-filled place where anything wonderful could happen.

Then I became a skeptic, somewhat resentful that life had been presented to me in this fairy tale mode. It was child's play, like Santa Claus. I had a real world to deal with.

Sometime in the 1990s I was at a gathering of local peace and justice people, and Fr. Richard McSorley SJ had been invited to talk to us. Fr. McSorley taught peace studies at Georgetown University. He was a noted activist committed to pacifism so I was interested in what he had to say. But that night McSorley wanted to talk about a Marian apparition. What? This wasn't what I expected, but McSorley being McSorley, I was open to whatever he had to say. He ended up showing us a film about a Marian apparition that was happening somewhere in South America. The film was interesting, but it didn't catch me until a woman described the "Mary" she saw like this: "The wind that was blowing through her hair, was the same wind that was blowing through our hair." I don't know what it was, but at that moment, I believed her, and became a believer. We are more than what we appear to be. Our lives are entrenched in layers of mystery that we cannot see, but in a flash, we might get a glimpse.

I'm still skeptical. But something has changed. I'm more open to the mystery of life, the possibilities of revelations, conversions, healing. There's more to these stories than what appears on the surface. Something deeper is happening that shouldn't be discounted as nonsense.