Pope Francis hails Bulgaria as “a culture of encounter” 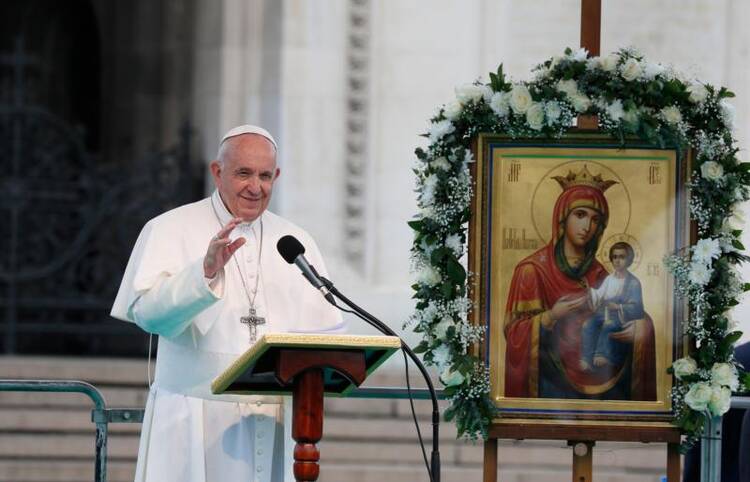 Pope Francis greets the crowd as he leads the "Regina Coeli" prayer in Alexander Nevsky Square in Sofia, Bulgaria, on May 5, 2019 (CNS photo/Paul Haring).

On his first visit to Bulgaria, Pope Francis today hailed the nation as “a place of encounter between many cultures and civilizations, a bridge between Eastern and Southern Europe, an open door to the Near East, a land with ancient Christian roots that nourish its vocation to favor encounter both in the region and in the international community.” He emphasized the fact that in Bulgaria, “diversity, combined with respect for distinctive identities, is seen as an opportunity, a source of enrichment, and not as a source of conflict.”

Speaking in a square in front of the presidential palace 90 minutes after his arrival, Pope Francis recalled how the country has offered hospitality to many different religious groups, and focused especially on the present-day situation of this country, which established diplomatic links with the Holy See in December of 1990.

He recalled that some 30 years after the end of the totalitarian communist regime that had “imprisoned freedom and initiatives,” Bulgaria now faces new problems. He mentioned three in particular: the massive exodus of people to other countries, especially to Western Europe, a low birth rate and immigration from the Middle East and elsewhere.

Pope Francis mentioned three problems Bulgaria faces: the massive exodus of people to other countries, especially to Western Europe, a low birth rate and immigration from the Middle East and elsewhere.

More than 2 million Bulgarians have emigrated from the country in recent years, Francis noted, “in search of new opportunities for work.” Secondly, like many other countries in Europe—“the old continent”—Bulgaria is experiencing a “new winter: the demographic winter which has descended like a curtain of ice on a large part of Europe, the consequence of a diminished confidence in the future.” These two facts have led to the depopulation and abandonment of many villages and cities, he said.

In his speech, delivered in Italian and translated into Bulgarian, Francis acknowledged the government’s efforts to create conditions so people, and especially the young, do not have to emigrate. He urged Bulgarians “to continue on this path to create conditions that enable the young to plan their future and use their energies here.”

In addition to the problems of emigration and low birth rate, Pope Francis said Bulgaria had had to deal with another problem in recent years: the arrival of migrants from the Middle East, Afghanistan and other places trying to reach the richer areas of Europe to find new lives or safe refuge. Bulgaria has built a long fence on its border with Turkey to stop the flow of migrants, and it has refused to sign the global compact for migration agreed to by most of the nations of the world at the United Nations conference in Morocco last year. Tomorrow, Francis will visit a refugee camp on the outskirts of the capital city of Sofia to draw attention to the issue of migration, but this event will not be shown on the national television.

In his nationally televised talk this morning, Pope Francis appealed to Bulgarians “not to close their eyes, hearts and hands to those who knock at their doors.” He reminded them that their country “has always stood out as a bridge between East and West, capable of fostering the encounter between cultures, ethnic groups, civilizations and different religions that have lived together in peace.” He told them that “the development of Bulgaria, both economically and culturally, necessarily passes through the recognition and valorization of this its specific characteristic.”

Pope Francis appealed to Bulgarians “not to close their eyes, hearts and hands to those who knock at their doors.”

Pope Francis arrived at Sofia’s international airport at 10 a.m. local time after a two-hour flight from Rome and was warmly welcomed by the country’s prime minister, Mr. Boyko Borisov, and four children who offered him flowers.

From there, he drove to the presidential palace in the center of Sofia, where he was given a state welcome by President Rumen Radev with a guard of honor and a band playing the anthems of the Vatican and of Bulgaria. The president escorted him inside the palace for a private conversation, after which he led him to the Atanas Burov square for a meeting with the country’s political and civic leaders.

Speaking first, the president welcomed Francis to “one of the oldest Christian states, which embraced the faith of Christ 12 centuries ago” and to a nation “that has overcome all vicissitudes and trials through their moral and spiritual virtues.” He noted that Francis’ motto for his visit was “Pacem in Terris,” “peace on earth,” and noted that the people of Bulgaria “know the price of peace,” having endured wars and much suffering. Not far from where they stood, he pointed out, an Orthodox temple, a mosque, a Catholic church and a synagogue all “coexist peacefully.”

He attributed the good relations between the Vatican and Bulgaria to “the builders of bridges” and spoke of how the shared memory of Saints Cyril and Methodius had brought them closer together. Indeed, he said, “today, when hatred and xenophobia are coming back to Europe, we remember the great mission of the holy brothers, Cyril and Methodius—to defend the right of every people to glorify God in their own language,” and said that “the deep meaning of their lesson is that linguistic and cultural differences do not prevent nations from living in peace and confessing common values.”

President Radev called the papal visit “one of the most significant events in the new history of our relations” because “we share common concerns and apprehensions”: the concern to protect peace and concern at the fate of so many millions “suffering from persecution, poverty, slavery, segregation and terror.” He told Francis: “Your visit is a testimony of your love for the Bulgarian people, and of your trust in Bulgaria to build a more peaceful, fairer and a more human world.”

Pope Francis then greeted the Bulgarian authorities and the country’s 7 million inhabitants, as well as Patriarch Neofit and members of the Holy Synod of the Bulgarian Orthodox Church (who make up 76 percent of the population). He had words of affection for the Catholic bishops and faithful who total a mere 1 percent in this land, and said he had come “to confirm (them) in their faith and encourage them.” He also greeted other Christians (1 percent of Bulgarians are Protestants), Muslims (10 percent of Bulgarians) and the nation’s small Jewish community and noted that Bulgaria offers hospitality “to every religion that promotes peace and harmony.” This hospitality, he said, is a call to build “a culture and environment of complete respect for the human person” and “reject every form of violence and coercion” and so “defeat those who seek by any means to manipulate and exploit religion.”

Francis linked his visit not only to that of John Paul II, who came here in May of 2002, but especially to John XXIII, who long before becoming pope headed the Holy See’s mission here for 10 years (1925-34), first as envoy and then apostolic delegate, and developed such a great love for the people of this land that he declared “my door would be open to everyone from Bulgaria, Catholic or Orthodox alike.”

Saints Cyril and Methodius, Pope Francis said, were “abundant and enduring fruits of Christian witness and of holiness."

Francis recalled that John XXIII had “worked tirelessly to promote fraternal collaboration among all Christians” and by convening the Second Vatican Council gave great impetus to the development of ecumenical relations.

Pope Francis recalled that every year since 1968, an official Bulgarian delegation composed of the highest civil and church authorities has visited the Vatican for the feast of Saints Cyril and Methodius (May 24), two brothers who were born in Salonica (Greece) in the early 800s, evangelized the Slavic peoples and were at the origin of the development of their languages and culture. Cyril and Methodius were “abundant and enduring fruits of Christian witness and of holiness,” Francis said, and prayed that these “co-patrons of Europe” might inspire new paths of peace and harmony between the churches and peoples of this continent.

He concluded with a prayer that Bulgaria, “bordered by the Danube and the shores of the Black Sea, made fertile by the humble work of many generations and open to cultural and commercial exchanges, integrated into the European Union and with solid ties to Russia and Turkey,” may be able to offer its children “a future of hope.” He ended with these words: “God Bless Bulgaria, keep her in peace and ever hospitable, and grant her prosperity and happiness.”