Why Virginia’s National Championship is the perfect Easter redemption story 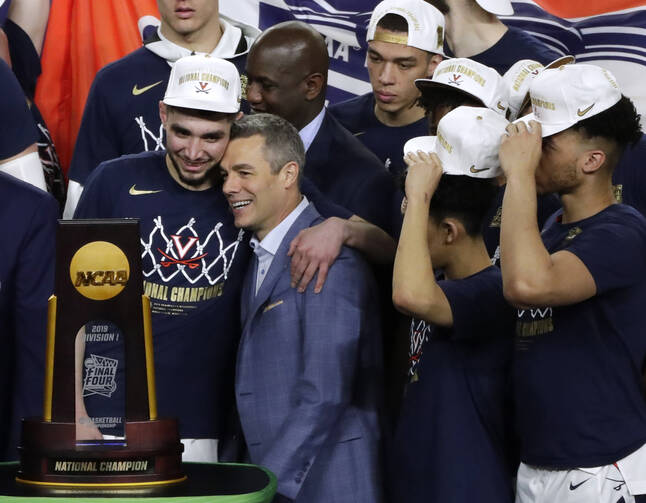 When I called home, fretting over my bracket picks, my father told me: Choose with your head; root with your heart—hard-earned wisdom from nearly 50 years of cheering on the University of Virginia basketball team. So, no, I did not have our beloved Cavaliers taking home the national title in my bracket for the America Media N.C.A.A. tournament pool. (The fact that our editor in chief had the faith and good sense to pick U.V.A. to go all the way does inspire confidence in the direction of the magazine.) But when my dad called on Sunday afternoon and asked if I wanted to fly out to Minneapolis for the championship game, it was not the time to overthink things. By 3:30 a.m., I was sleepwalking to the New York City subway with little more than the orange T-shirt and grey Virginia sweatshirt on my back.

A quick recap of the saga that had brought Virginia men’s basketball team to this point: Last year, U.V.A. became the first (and only) No. 1 seed in N.C.A.A. history to lose to a No. 16 seed (University of Maryland Baltimore County) in the first round of the tournament. It was humiliating. Some of the players received death threats. My bracket was destroyed.

Basketball does not heal all wounds. But having something to hope for wouldn’t hurt either.

And for much of the game in the first round of this year’s tournament, it seemed like Virginia was going to do it again. After an impressive year and with a share of the regular season A.C.C. championship already under their belt, top-seeded U.V.A. trailed No. 16 seed Gardner-Webb University for the entire first half. On Twitter, a chorus of commentators taunted that if the Cavaliers lost this one, U.V.A. should shutter its campus and Virginia should “lose statehood.” (For the record, Virginia is a commonwealth. And it’s called “grounds,” not campus.)

For those of us who love the school and the commonwealth, the growing feeling of dread as the score ran away from us was no less intense for being familiar. We really needed a win—or at least not another historic loss. The past few years in my home state and at my alma mater have been marked by tragedy, scandal, violence and racism. I know basketball does not heal all wounds. But having something to hope for wouldn’t hurt either.

And hope is exactly what Coach Tony Bennett and the young men of Virginia basketball gave us this March. Their journey to the school’s first-ever national championship is one of the greatest redemption stories in college basketball, and during this season of Lent, the Easter metaphors are almost too easy.

“All year, we kept saying, ‘If we use this adversity right, it would buy us a ticket to a place we couldn't have gone any other way,’” said U.V.A. guard Kyle Guy after Monday’s win. “Without that loss [to U.M.B.C.], maybe we don’t win the championship.” Put another way: There’s no Easter without Good Friday.

Even basketball can remind us of the ways God transforms weakness into strength, loss into victory.

But for the Cavaliers, the Christian story is more than a metaphor for their historic tournament run. It is at the heart of Tony Bennett’s coaching philosophy. He instills in his players five “biblical pillars”: humility, passion, unity, servanthood and thankfulness.

Bennett describes the guiding wisdom for his program this way: “Humility, do you know who you are as a team and as a player? Passion, do you play with passion? Unity, being part of something bigger than yourself. Servanthood, the way to greatness is through being a servant. And thankfulness. We use those for our team specifically.”

What Bennett and the Cavaliers know better than most teams is that humility does not come without humiliation. The University of Virginia is still the only top-seeded team to lose in the first round. But thanks to the resilience of its players—and the fervent prayers of many fans—the darkest day in the program’s history will now be remembered as the first step on their road to redemption. Even basketball can remind us of the ways God transforms weakness into strength, loss into victory.

Ahead of the Final Four game against Auburn, Coach Bennett told the team: “Just bring your two fish and your five loaves.... It will be enough. It will be enough for the masses. When you guys play the right way, the collectiveness of it takes over.”

On Monday night, it was more than enough for the 72,062 people packed into a stadium in Minneapolis. Tonight, I’ll get on my red-eye to New York a proud Virginian and a thankful daughter with joy to spare. Wahoowa.

Redemption from a lost basketball game? Seriously? I am from Wisconsin, and Dick Bennett, the father, came close with the UW Badgers...but redemption? It's only a game.

Talk about cheapening Easter and the Redemption Story! Bennett's "five pillars" are incoherent, e.g., what on earth does he mean by "servanthood" on a college basketball court?

I'm happy UVA won the whole thing. After all, to be given such a gift in the win against Auburn, must mean that the biblical idea "to whom much is given, much is expected" should be carried out. And, the trip to the finals was definitely pure gift. (Disclaimer: I am an Auburn fan, an Auburn Grad, an Auburn retiree and a resident of Auburn AL).

A truly excellent essay at the intersection of theology and basketball. And a genuine insight into how best to play the Game of Life. I am a proud graduate of JMU and GMU, but hats off to you and UVA. Good for the commonwealth and good for Charlottesville also. The white supremacists can’t have it. We take it back. Great job, Ms. Mckinless.

What a stretch. This article tells that redemption is available in purely secular and psychological terms, without the need for religion. Metaphor are always true in a minor way and untrue in a major way. But they can be untrue in such a minor way that they are not worth using.