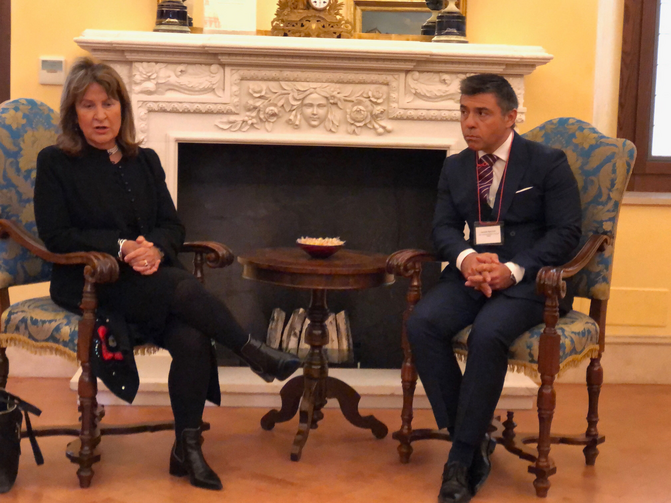 Cardinal Pietro Parolin, the Vatican secretary of state to Pope Francis, received an international delegation of judges, legal experts, politicians and L.G.B.T. activists on April 5 who are seeking the Holy See’s support for the decriminalization of homosexuality and for the respect of the human dignity of L.G.B.T. people.

It was the first such meeting at an official level and brought together 51 members of the Inter-American Institute of Human Rights, the United Nations Latin American Institute for the Prevention of Crime and Treatment of the Offenders, and the International Bar Association. Participants came from several countries, including the United States, Canada, the United Kingdom, Australia, Argentina and the European Union.

They had come to Rome to meet Pope Francis but, earlier in the week, the Vatican informed them that this was not possible due to complications of his agenda. The pope dispatched his right-hand man, Cardinal Parolin, to meet with them.

Participants told the press later at a briefing in the Cardinal Cesi hotel near the Vatican that they and the cardinal viewed the meeting as “the opening of a dialogue” between human rights advocates and the Holy See on this important issue. The cardinal promised to refer all they told him to the pope.

During the hour-long meeting, the cardinal listened to three leading participants from this high-powered body—Baroness Helena Kennedy from the United Kingdom, representing the International Bar Association; Leonard Raznovich from Argentina; and former Chief Justice Michael Kirby from Australia—speak of violence and discrimination against millions of L.G.B.T. people across the world.

The delegates presented Cardinal Parolin with “the preliminary results” of their “research evidence” of “the likelihood of serious violations of international human rights law and failures to secure basic protections to vulnerable minorities” in the 10 jurisdictions in the Caribbean that they had researched, including Jamaica, Barbados and Santa Lucia where the church is very influential.

They requested in the light of the gravity of these findings that “the Vatican consider issuing a public statement in which the official policy of the Holy See is clarified.” They noted “the active steps” taken by Pope Francis to resolve the matter in Belize, where the local church initially resisted moves to decriminalize homosexual acts, as well as the opinion of the U.N. independent expert on Sexual Orientation and Gender Identity, which had been sent for the purpose of this meeting, who said: “I am convinced that a pronouncement of His Holiness would have been of fundamental importance in the work of fighting violence and discrimination that affects hundreds of millions of people every day.”

The delegates requested that the church declare that “human dignity implies the respect of every person as created by God” and “hence criminalization of L.G.B.T. people is today, as in the darkest times in the history of humanity, a manifestation of irrational hatred for that which is different from the norm and that homophobia is, in effect, a feeling of hatred and rejection which the church condemns, wherever it takes place.”

The delegates requested that the church declare that “human dignity implies the respect of every person as created by God.”

The group also asked that the Catholic Church “call upon the international community to recognize that criminalization of homosexuality and any form of consented intimate acts, sexual or not, between adults is an intolerable affront to human dignity.”

They argued that “the church calls upon all states to commit to the promotion and protection of human rights for all people, independently of their sexual orientation or gender identity by introducing legislative and administrative measures that assure that no person may suffer penal sanctions, executions, arrest or detention, as well as no form of discrimination, on the basis of their sexual orientation or gender identity.”

They asked too that the church call upon “all Christians and also instructs all national and regional episcopal conferences, without exception, to work for the decriminalization of homosexuality and for the abolition of all forms of punishment for consented intimate sexual acts between adults, wherever they are still being criminally persecuted, without ‘buts’ or conditions.”

Finally, they asked that the church call upon all states “to declare illegal the application of the so-called conversion ‘cure’ therapies as degrading or cruel treatment and requests health professionals to refrain from taking part in any way in such therapies.”

Cardinal Parolin thanked them for their input on these issues and assured the delegation that these concerns would be studied by the Holy See. According to a Vatican statement, Cardinal Parolin repeated the Catholic church's position in defence of every person and against every form of violence. The coordinator of the meeting, Robert Carlés an Argentinian lawyer and a personal friend of Pope Francis, said the cardinal emphasized that the dignity of the human person was of special concern to the church because of the Gospel and its teaching.

Cardinal Parolin told the delegation that it was the church’s mission to accompany those who suffer and drew attention to the fact that the catechism emphasized that it is necessary to avoid every form of violence and unjust discrimination against persons with homosexual orientation. He asserted that these questions would be taken into account in the doctrine or teaching of the church and said that he would communicate what they had told him to Pope Francis and that the Vatican would evaluate the ways in which they could work together with this group in the future.

“This was a historic meeting and the first in which the Vatican officially received an L.G.B.T. delegation. [Cardinal] Parolin received us very well, he listened to us and started a very important dialogue which will continue,” Mr. Raznovich, the coordinator of the research on the Caribbean juridictions, told the press after the meeting.